SCOTUS rounds out session with rulings on execution drug, redistricting and mercury emissions 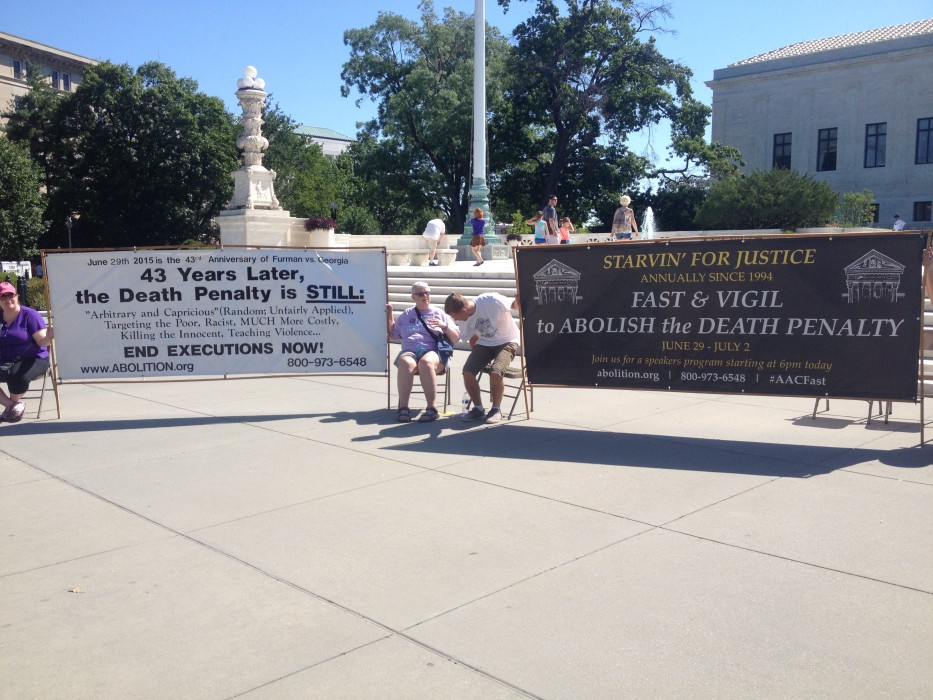 Somber describes the mood outside the Supreme Court Monday morning, when the justices dealt a blow to death penalty abolitionists.

In a 5-4 decision, the court ruled against three Death Row prisoners in Oklahoma who sought to ban a controversial drug during lethal injections.

The drug, called midazolam, is a sedative intended to put prisoners into a coma-like state during executions. But the inmates argued that the chemical can’t reliably induce the state of unconsciousness that would prevent them from feeling the painful impact of two other drugs in the three-drug lethal injection. They pointed to three botched lethal injection cases last year –in one case, an Oklahoma prisoner awoke during his execution after being injected with midazolam.

“It’s sickening,” said Bill Pelke, the director of the  Journey for Hope…from Violence to Healing, an organization led by murder victim family members who oppose the death penalty. He was one of the protesters standing outside the court when the opinion was issued.

“That drug is obviously not effective and I’m not sure why the Supreme Court says it’s okay,” Pelke said after learning of the decision. He is against all forms of the death penalty, especially those that he considers cruel and unusual.

Writing for the majority, Justice Samuel Alito Jr. explained that the plaintiffs failed to show an available and preferable alternative to midazolam. He also wrote that the prisoners didn’t demonstrate that the drug showed a substantial risk of severe pain.

Oklahoma and other states that execute prisoners argued that banning the drug would effectively prevent lethal injections. Many chemical manufacturers, under pressure from anti-death penalty advocates, have stopped providing other drugs used to induce unconsciousness during executions.

Richard Dieter, senior program director at Death Penalty Information Center, says that the decision won’t have a huge impact on states’ use of lethal injections.

“It is not a glowing endorsement of midazolam,” he remarked. “That remains a risky drug for the purposes of execution. It merely says that there’s not enough evidence to find it unconstitutional. So I think many states will look for alternative drugs.”

But Dieter did say that the dissenting justices raised a big question about the death penalty itself. In his dissent, Justice Stephen Breyer asked the court to consider the issue as a whole.

Another big ruling issued Monday was in a challenge brought by industry groups and mainly Republican-led states against limits set by President Barack Obama’s administration on mercury and other toxic pollutants from power plants. The regulations took effect in April.

In a 5-4 decision, the justices sided with the plaintiffs, saying that the EPA should have taken into account the cost of compliance before deciding to regulate pollutants. The industry groups claimed that the regulations could cost them $9.6 billion, which would be passed on to consumers.

But the agency contended that the law didn’t require them to examine the cost factor so early in the process.

The Supreme Court recognized that the EPA demonstrated that the health and environmental benefits of the regulations outweigh the industry costs. But it sent the case back to the lower court, which will then ask the EPA to reconsider the regulations.

“This decision doesn’t change EPA’s authority to protect the public from toxic air pollution,” said Neil Gormley, an attorney with EarthJustice, a nonprofit environmental law firm that represented several groups supporting the EPA. “It does give the EPA another hoop it has to jump through.”

In another 5-4 decision, the court ruled that it was constitutional when Arizona residents voted in 2000 to turn over redistricting duties to an independent commission comprised of two Republicans, two Democrats and a fifth member to be chosen by the other four.

Republican state lawmakers claimed that it was unconstitutional for a bipartisan independent commission to redraw congressional and legislative district lines in the state. They argued that the U.S. Constitution grants legislators the power to draw their own districts.

These decisions may add to the recent criticism of the Supreme Court. Last week’s ruling in favor of same sex marriage and the Affordable Care Act have unleashed a flurry of political attacks against the court, including calls to impeach the justices and strip the court of its authority.