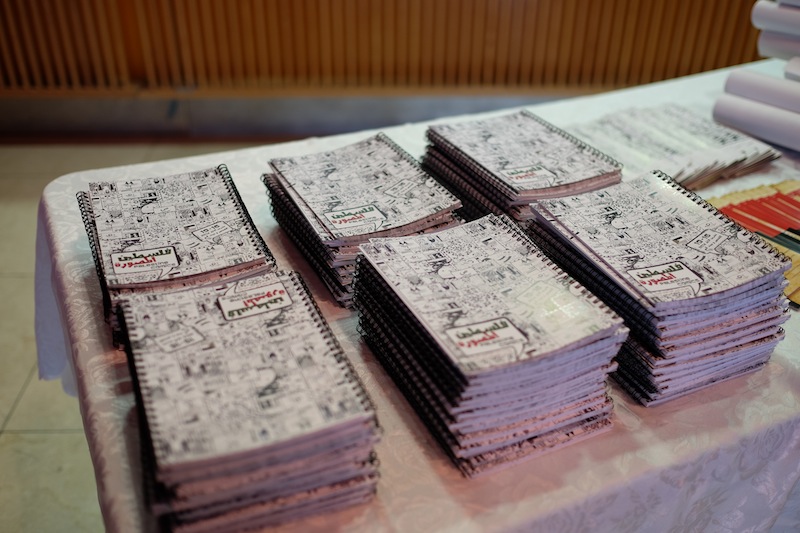 The first Palestine Comics Festival was held in East Jerusalem with the aim of encouraging young new talent and reviving cultural life in the Holy Land.

A new arts medium is gaining popularity in the Palestinian Territories. Comics and graphic novels depicting the reality of Israel-Palestine tensions were showcased in a home-grown festival attended by hundreds of fans and internationally acclaimed cartoonists. But the event was not without controversy. FSRN’s Dalia Hatuqa reports.

In East Jerusalem, the first-ever Palestine Comics Festival, drew a diverse crowd. Renown international artists mixed with curious onlookers who came to learn more about an art form that is starting to take off here in the Holy Land.

At the Yabous Cultural Centre, 50 standalone cartoons, comic strips and excerpts from graphic novels were on display. All had political content, providing a different but unnerving first-hand account of the Palestinian-Israeli conflict.

Rania Elias, the director of Yabous, says the festival’s goal is to encourage cartooning among Palestinians, and to showcase a new breed of talents. “It’s a new kind of arts in Palestine,” Elias remarks. “Few artists are practicing comics, more of them are caricatures, not comics. So the idea is how to encourage the young generation to be more involved in this kind of art, to express any social issues, political issues.”

The event itself attracted controversy: besides the political content, one of the leading artists, who was due to present his work, was held by Israeli immigration authorities at Tel Aviv’s Ben Gurion Airport for four hours before getting deported.

The artist, Maximilien LeRoy, a French citizen who published a graphic novel about Gaza, and another about the separation wall in the West Bank, has been barred from entering Israel and the Palestinian Territories for ten years.

Rania Elias, the director of the Yabous cultural center, says this shows “The occupation is afraid even from artists, from a paper, a newspaper, from a painting, from musicians. What they are trying to do is trying to close the mouth of all artists so as not to say anything about whats happening in Palestine.”

Despite the controversy, the festival drew international and local graphic novelists, including Guy Delisle, a Canadian cartoonist, who won an international award for his travelogue ‘Jerusalem: Chronicles from the Holy City.’ Delisle says his inspiration came from living in Jerusalem in 2009, and having many friends back home ask him about the conflict, which they knew very little about. “A comic book is very easy to explain things,” he tells FSRN. “It’s a good way to explain and go in details; it just talks to other groups of people. I go in college where students have read my book and they had a lot of questions about the occupation and Jerusalem. And that’s interesting because they are not going to go read a book about the situation which is serious. They are probably not going to watch a documentary cause it’s too serious. But a comic book they can read.”

Because comics are a relatively novel genre in the region, the festival also mounted exhibits in Manger Square and at a refugee camp in Bethlehem. Among the attendees was Yaseen Abu Khdeir, who spent 26 years in an Israeli prison. He said comics are a good way to spread the word about Palestinian culture. “The shortest and most meaningful messages come from comics because they fuse words and visual elements. Naji al-Ali showed us the power of this fusion. We grew up reading his cartoons, which he used to explain our Palestinian reality without prejudice.”

Abu Khdeir is refering to al-Ali, a renowned Palestinian political cartoonist, known for his scathing criticism of the Israeli occupation. He was gunned down in London in 1987.

Drawing inspiration from al-Ali and from a first-hand experience in an Israeli prison, Palestinian cartoonist Mohammad Sabaaneh’s work was a mix of powerful aesthetics and intense political commentary.

Sabaaneh, a 35-year-old who works for the Palestinian daily Al-Hayat al-Jadida, was arrested last year by Israeli authorities at a border crossing and jailed for five months without charge. “When they arrested me they asked me a lot of things, about my work, my cartoons, why I criticize Israel and my participation in a lot of conferences.” He says he is aware Israeli and Palestinian Authority officials view his satirical cartoons as antagonistic. But he adds his experience has not deterred him and he hopes to support political cartooning as a new genre of graphic reportage.

In the meantime, the festival’s organizers are already preparing for next year’s event, which will include more screenings, exhibitions and workshops to support talented independent creators with a knack for visual story-telling.