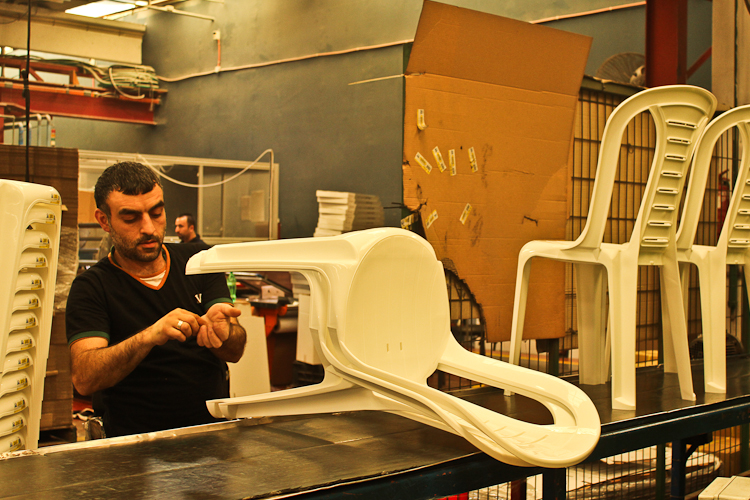 British private security contractor G4S announced Wednesday that the company will liquidate its operations in Israel after reporting a steep drop in annual profits. The multinational, which sells services and equipment to Israeli detention centers and West Bank checkpoints, has long been a focus of the BDS movement. But a new U.S. law, signed late last month by President Barack Obama, may complicate the economic shaming campaigns that have been gaining traction around the world.

The stated aim of the Trade Facilitation and Trade Enforcement Act of 2015 is to remove unfair barriers to competitive U.S. trade, but the legislation also includes provisions designed to oppose boycotts and similar economic measures against Israel. While the bill passed without much controversy or coverage in the U.S., Lena Odgaard reports that its implications could mark a change in 50 years of U.S. policy on the Israeli-Palestinian conflict.

“As you see, the line of chairs, we produce more than 2,000 pieces a day,” says Yehuda Cohen, the CEO of Lipski, during a tour of a factory run by the Israeli company that produces plastic products. The factory is located around 10 miles inside the Palestinian West Bank, but labels on the products state ‘Made in Israel.’

Israeli settlements in the West Bank, including the industrial areas, are deemed illegal under international law. Still, they continue to grow and are today home to more than half a million Israelis.

For decades, the U.S. has been a lead broker in Israeli-Palestinian peace negotiations. U.S. administrations have repeatedly condemned Israeli construction in the occupied Palestinian territories. But a new trade bill might set a new precedent for American policy.

On February 24th, President Barack Obama signed a trade bill that doesn’t distinguish between Israeli companies inside its internationally recognized borders and within the occupied West Bank.

“It’s basically redefining Israel in a way that contravenes states’ duty not to recognize Israel’s sovereignty over settlements,” Sarah Sa’adoun of Human Rights Watch told FSRN in a phone interview from the U.S.

Obama expressed the same concern when signing the bill saying that by conflating Israel and ‘Israeli-controlled territories,’ certain provisions are contrary to longstanding U.S. policy. He stated that, while he is president, he will not apply the part of the bill tied to the protection of West Bank settlements. But the statement doesn’t prevent future presidents from applying it.

This would signal the end of the two-state solution to the Israeli-Palestinian conflict says Palestinian-American businessman Sam Bahour, “because if this legality of settlements is given, then the whole paradigm of two states no longer has a meaning.”

“It’s completely removing the notion that there is another piece of land that is not part of the Israeli sovereign,” explains Bahour. “So not only is it legalizing settlements, it’s also giving Israel the ability to claim all of the land from the river to the sea.”

The state-level bills are a response to a growing movement calling for boycott, divestment and sanctions – in short BDS – against companies profiting from the Israeli occupation. The legislation targets boycotts against Israel on both a national and international level. It specifies that the U.S. must discourage foreign trade partners from boycotting Israeli goods, report any decisions made by foreign private and public institutions to limit business with Israel, and prevent investigations or prosecutions by international organizations into Americans doing business in any Israeli-controlled area.

This severely restricts personal freedoms, says Saadoun from Human Rights Watch, because “the provisions are problematic from a broader perspective because they seek to disrupt civil society movement.”

The BDS movement in the U.S. has gained significant support in recent years. Artists, musicians, student unions, academics and religious groups and congregations have publicly announced different forms of boycotts targeting Israeli goods and services. In January the United Methodist Church representing 13 million members decided to divest from Israeli banks operating in the settlements. And bowing to enormous pressure from the BDS movement, the Israeli company SodaStream closed its last factory in the West Bank on February 29th.

Sixty percent of the West Bank is under full Israeli control and inaccessible for Palestinian development, leaving the economy dependent on donor aid.

A recent report by Human Rights Watch concludes that the settlement businesses contribute to Israel’s violation of Palestinian rights.

The Lipski plastics factory is located in the Israeli industrial park, Barqan. Research by Human Rights Watch indicates that Barqan lies on privately owned Palestinian land confiscated by the Israeli army in 1981. Today, it’s 1 of 14 industrial zones with a total of around 1,000 Israeli businesses across the West Bank. By generating jobs and taxes for the settlement municipalities, they foster continuous growth, says Saadoun.

“By basically helping settlements to function, they are also contributing to Israel’s unlawful confiscation of West Bank land and other resources, which under international law can only be used for the benefit of the Palestinian people or for the strict military necessity,” explains Saadoun.

As a countermove, pro-Israeli lobby groups seek to fight the boycotts. One way is by introducing politicians and opinion makers to factories like Lipski.

“I want to show them that boycott or destruction of industrial area is not the way,” Cohen explains. “I say to everybody I’m not a settlement, I’m an industrial area.”

Cohen says that lately he has welcomed several American officials, as well as ambassadors and parliamentarians from around the world. Palestinian rights activists fear that this diplomatic battle will lead to more anti-boycott legislation in and outside of the U.S.