MSF calls for independent investigation into U.S. bombing of its hospital in Kunduz, Afghanistan 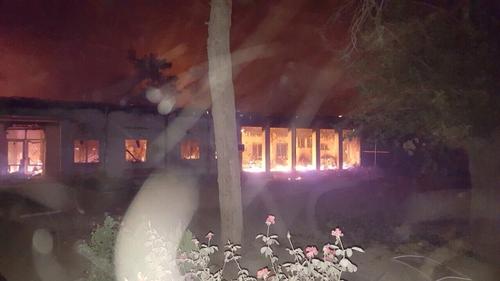 Fires burn in the MSF emergency trauma hospital in Kunduz, Afghanistan, after it was hit and partially destroyed by missiles 03 October 2015. (Photo source: MSF.org)

The international medical charity Doctors without Borders is calling for an independent investigation into the bombing of its hospital in the Kunduz province of Afghanistan by U.S. Forces over the weekend. Dalia Hatuqa reports from Washington D.C.

Three days after a U.S. aircraft bombed a hospital run by Doctors Without Borders in Afghanistan, General John Campbell, the top U.S. commander in Afghanistan, acknowledged that U.S. forces were not under fire as initially reported.

In a Monday press briefing at the Pentagon Campbell said it was Afghan forces who called in for the American airstrikes that resulted in civilian casualties at a Kunduz hospital run by the medical charity known by its French acronym, MSF.

“We have now learned that on Oct. 3, Afghan forces advised that they were taking fire from enemy positions and asked for air support from U.S. forces,” explains Campbell. “An air strike was then called to eliminate the Taliban threat and several civilians were accidentally struck.”

The Saturday morning airstrikes killed at least 22 people including 12 staff members and 10 patients, three of them children. The aid group said the bombings injured another 37 people, including 19 of its staff members, and that other patients and staff remains unaccounted for.

MSF says it had shared GPS coordinates of their facility before the attack and notified both Afghan and U.S. military authorities after the initial airstrike.

General Campbell responded to media questions about how and why the hospital was hit by saying that an investigation is now underway.

“I have ordered a thorough investigation into this tragic incident and the investigation is ongoing,” says Campbell. “The Afghans have ordered the same. If errors were committed we will acknowledge them. We’ll hold those responsible accountable, and we’ll take steps to ensure mistakes are not repeated.”

Doctors without Borders says its hospital was hit by “a series of aerial bombing raids at approximately 15 minute intervals” in Saturday’s pre-dawn hours. The group has since called for an independent inquiry into what it is calling a war crime.

Christopher Swift is an international law expert at Georgetown University. He says that it’s important to prove intent to establish whether the attack on the hospital was a war crime.

Phyllis Bennis, a fellow at the Institute for Policy Studies, says she does not expect a U.S. probe to yield any tangible results.

“I think they will go through the form of an investigation. Maybe somebody at a fairly low level will be reprimanded for calling in the wrong coordinates but I’m absolutely not optimistic that here will be any serious effort to hold accountable at the highest level people who make decisions like this. This is the inevitable response of a continuing air war against an impoverished nation like Afghanistan that has been going on for 14 years this week,” Bennis says.

MSF has since announced it is leaving Kunduz. The hospital’s trauma center was the only medical facility in the region that can deal with major injuries. According to MSF, the group provided care to 22,000 patients in the province in 2014.

The Afghan Taliban recently launched an offensive in the province of Kunduz, triggering a humanitarian crisis and trapping thousands of civilians in the crossfire between government forces and Taliban fighters. The Taliban’s offensive there marks a major blow for Afghanistan’s western-trained forces, who have largely been fighting on their own since last December.

An Afghan humanitarian aid worker who requested anonymity for security reasons says four of his relatives died last week. He and the rest of his family fled Kunduz soon after the MSF hospital bombing.

“It is difficult to know who kills who during war. People were even killed while in the hospital, because everyone takes advantage of how the rule of law deteriorates during war. I left the Kunduz province because the Taliban were asking about me and my whereabouts. Many others have left the province like I did. It’s so hard to live under threat,” the anonymous aid worker says.

Kathy Kelly is with the anti-U.S.-war group Voices for Creative Nonviolence. She has been to Afghanistan 17 times since 2010 and was recently there, and says the situation is dire.

In the meantime, MSF is waiting to hear back on who would conduct a probe into this deadly attack, saying relying only on an internal investigation by a party to the conflict would be wholly insufficient.