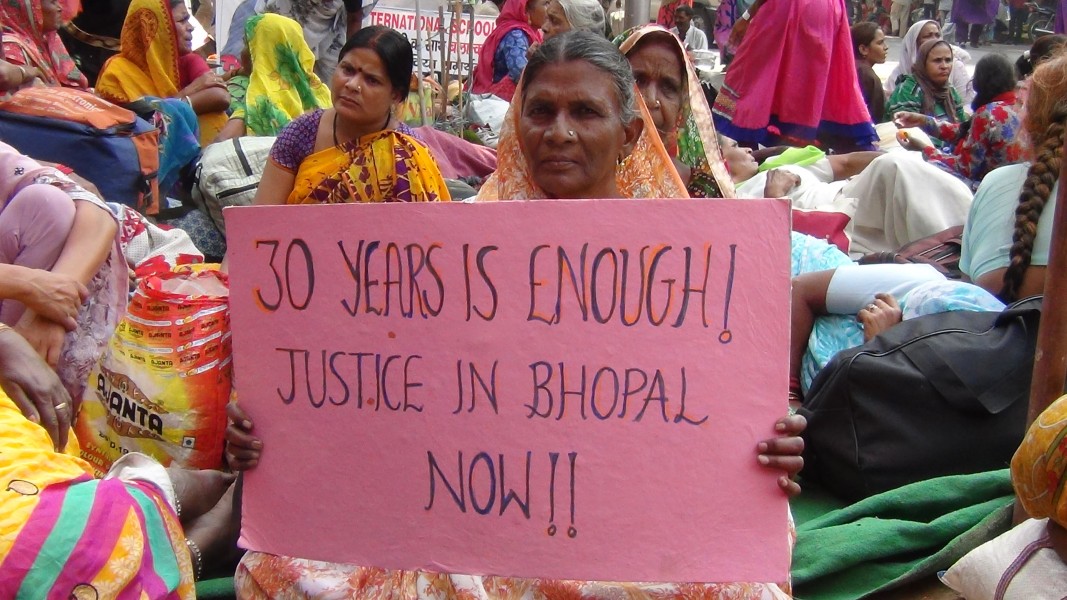 Hundreds of survivors of the 1984 gas tragedy marched in the Central Indian City of Bhopal on Wednesday to mark the 30th anniversary of what is widely known as the world’s worst industrial disaster. More than 20,000 people have died and hundreds of thousands are suffering serious illnesses since the gas leak from a pesticide plant owned by Union Carbide. Protests, candle light marches and prayer meetings were held in several other Indian cities as well with calls for accountability and adequate compensation for the survivors. Bismillah Geelani has the story.

Near the abandoned Union Carbide pesticide factory in Bhopal where the gas leak tragedy occurred thirty years ago, hundreds of protesters chanted slogans while burning a monster-like effigy meant to personify Dow Chemicals. The company purchased the Union Carbide Corporation in 1999 but claims it is not legally liable for damages resulting from the disaster.

Among the protesters is 60-year old Savitri Devi who lost her entire family after thousands of tons of poisonous gas leaked from the factory in 1984.

“My father, mother and brothers slept but did not wake up the next morning,” Devi recalls. “They all suffocated to death. I can’t forget the night, there was smoke everywhere and it burned the eyes and chest. People were coughing, vomiting and collapsing.”

Devi herself fell chronically ill and is still battling with respiratory and heart diseases. But the compensation she received wasn’t even enough to cover her medical bills.

“The government gave us $400.00 and made promises,” she says. “For a number of years we were told thousands of dollars more were coming, but we never saw any of it. And now they are totally refusing to give us anything. I have nothing and can’t even work with all these ailments and I have to pay for my medicine regularly.”

Activists say a majority of the survivors have been denied compensation because they are not on the official government list of affected people. They add that the government does not seem interested in correcting its census of disaster survivors.

“The studies that have been conducted by the government’s own agencies, including the Indian Council of Medical Research, show that in just the first nine years there were more than 12,000 deaths whereas the central government said only 5,295 people died because of the gas,” Bhopal Group of Information and Action member Satinath Sarangi says.

“If you see the records of the hospitals meant for gas affected people,” Sarangi continues, “4000 people are visiting every day and the hospital records further say that there are more than 460,000 people chronically ill. And yet the government says that 93 percent of the survivors had to go to the hospital just for one day. So these figures are actually a cruel joke and we think that the government decided to go with these figures because they wanted to help Union Carbide and Dow Chemical escape proper liability.”

Warren Anderson, Union Carbide’s Chairman and CEO at the time of the gas leak disaster was charged with manslaughter and placed under house arrest upon arrival in India. He was later allowed to leave the country and refused to return to face trial.

The United States repeatedly turned down India’s requests for Anderson’s extradition up until his death in September of this year. The survivors are now demanding that other officials of the company be brought to justice.

“Warren Anderson’s death will affect only his criminal liability as the principal accused,” Sarangi says. “When it comes to the compensation it is essentially from the corporation and the corporation has so far been represented by Secretary John McDonald, so we are now pressing for his extradition.

The survivors continue to demand the immediate disposal of the hundreds of metric tons of toxic waste that are still on the grounds of the abandoned factory site, saying the waste is a major cause of environmental pollution and water contamination in the area. Bismillah Geelani, FSRN, New Delhi.