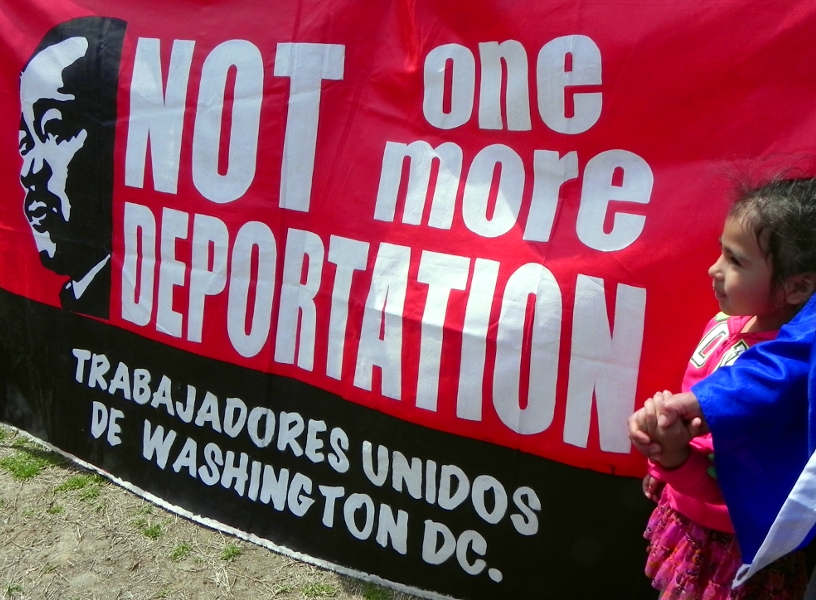 Local immigrant day laborers and their children lead the march.

An estimated five million undocumented immigrants in the U.S. may benefit from the expanded deferred deportation executive action announced by President Obama on Nov. 20th.

Eva Urbinna is one of them. Speaking from her Chicago home via telephone, Urbinna said she qualifies through her daughter.

While her daughter is only five, Urbinna has been living and working in the U.S. for 20 years. She said she came from Mexico to be with her parents, and now that she has a daughter and all of her family are living in the U.S., she doesn’t want to go back. “I’m going to stay over here for a long time with my daughter for her to go to high school, for the college, and she finishes her career. So I stay over here.”

The President’s executive actions that would allow Urbinna to stay in the U.S. for the time being came under fire Tuesday on Capitol Hill, as House Republicans convened two committee hearings to question the legality of Obama’s go-it-alone strategy. His actions would temporarily halt deportations for undocumented immigrants who have been in the U.S. for more than five years, and have children who were either born here or hold green cards. They would also allow for them to apply for legal work permits and taxpayer ID numbers.

During his opening statement at the House Homeland Security hearing, Chairman Mike McCaul said the President’s decision threatens the Constitution and undermines Democracy. The Texas Republican said while America’s immigration system is broken and needs to be fixed, Obama is going about it the wrong way: “We are a nation of laws, yet this unprecedented executive power-grab undermines the principle that the people, not just one man, should be the ultimate decision-makers in our country’s most important political matters.”

McCaul went on to lament that the President had broken the trust between the government’s branches. But when he questioned Homeland Security Secretary Jeh Johnson on the legality of the President’s actions, Johnson said that they spent months in consultation with lawyers developing the reforms. “The analysis was very thoughtful, very time consuming and very extensive,” Johnson told the committee. “And I’m satisfied as a lawyer myself, and the person who has to come here and defend these actions, that what we have done is well within our existing legal authority.”

Johnson, who was grilled during the hearing by various members of Congress, stood firm on his position that the executive actions were the right thing to do. “The actions we took will begin to fix the system in a number of respects, to promote border security for the future and to send a strong message that our borders are not open to illegal migration.”

The constitutionality of Obama’s decisions were also taken up in the afternoon by the House Judiciary Committee, which heard from four legal scholars.

Attorney Thomas Dupree, Jr. testified against the President’s actions, saying he exceeded his authority under the Constitution. “The framers of our Constitution were well aware of the dangers of executive overreach,” said Dupree, Jr. “That is why they wrote a Constitution providing for the separation of powers, and why the first sentence of Article I, Section 1 our of Constitution states, quote, ‘All legislative Powers herein granted shall be vested in a Congress of the United States.”

But National Immigration Law Center Executive Director Marielena Hincapie, who spoke in favor of the actions, said Obama’s actions are well within the scope of his authority. “He is relying on the doctrine of prosecutorial discretion, which you have heard about, which provides the Department of Homeland Security as well as every law enforcement agency in this country the authority to set enforcement priorities, to target resources and to shape how low law will be implemented,” Hincapie told lawmakers.

Hincapie added that every President, both Republican and Democrat, since Eisenhower has exercised prosecutorial discretion to protect undocumented immigrants from deportation.

Many Republicans are seeking ways to stop the implementation of Obama’s executive actions.

Various news outlets have reported that some Republicans have threatened to include language in the upcoming omnibus spending bill that says no funds can be used to carry out policy changes announced by Obama. While Congress must pass that bill by Dec. 11th to avoid a government shutdown, the White House indicated Tuesday that Obama would veto it if included such language.

While it is still too early to analyze the true effects of the President’s actions, immigration advocacy groups are already starting to field calls from people with questions. “People are wondering whether they qualify or not,” says Tania Unzueta, organizer with the Not One More Deportation campaign with the National Day Laborer Organization Network. “There’s a lot of confusion, I think, about how long you need to have been here, the criminal record and so people are just concerned about do they qualify and what steps they need to make sure they apply.”

Unzueta says, despite what those in opposition of the President’s move are saying, the actions do not grant amnesty and will not open the floodgates for illegal immigration. In fact, those who come to the country without authorization starting Jan. 1, 2014, will be prioritized for deportation.

Back in Chicago, Eva Urbinna said on the phone that while she is happy the President’s actions will benefit her, but she is “not happy that 7 million people do not have qualifications.”

Urbinna says she hopes President Obama and Congress can find a way to work together to implement more permanent immigration reform measures.