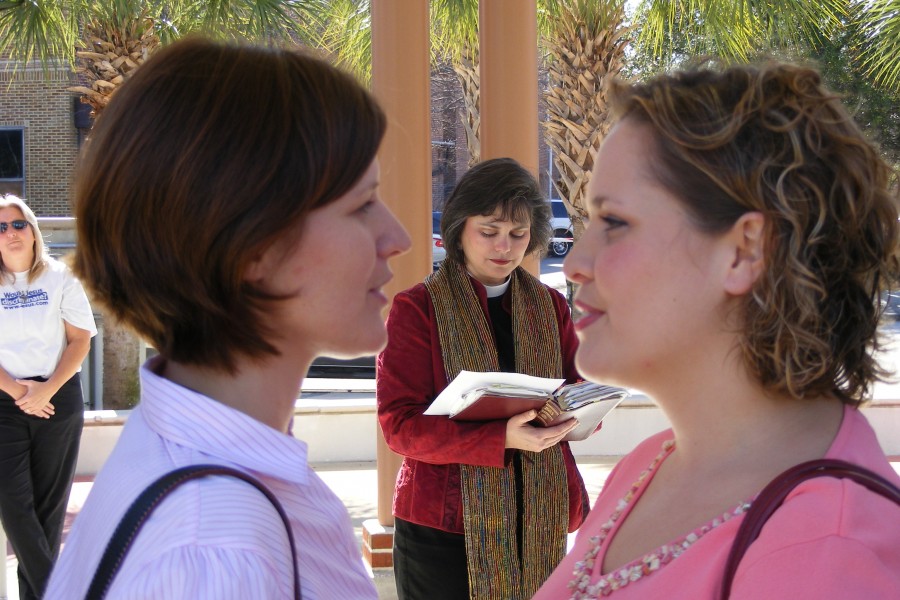 Same-sex couples exchange vows during a Valentine's Day 2008 ceremony after they were denied marriage licenses by Hillsborough County. (Photo by Seán Kinane/WMNF News)

Florida is likely to see its first legal same-sex marriages beginning next Tuesday, even though voters in 2008 added to the state constitution a ban on all marriages except between opposite-sex couples. But it remains unclear whether there will be same-sex marriages across the state or if they will be limited to one rural panhandle county. On Monday, Florida Attorney General Pam Bondi asked a U.S. District Judge to clarify whether his ruling that the state’s ban on same-sex marriages violates the U.S. Constitution will apply to the whole state or only to Washington County. For more on the story, FSRN’s Seán Kinane interviewed Michael Allan, associate dean and professor at Stetson University College of Law in Gulfport, Florida.

Seán Kinane: Professor Allen, where does the legal issue of marriage equality in Florida stand?

Michael Allan: Judge [Robert] Hinkle, who is a federal judge in the Northern District of Florida, ruled that the Florida ban on same-sex marriage was unconstitutional. And he stayed in his order thru January fifth. The state sought to have that order extended, the stay extended, by going to what’s called the Eleventh Circuit Court of Appeals, which is the court above the Northern District of Florida. The 11th Circuit denied the request to extend the stay and the state then sought to extended stay in the Supreme Court of the United States. And the Supreme Court of the United States refused to extend the stay either. At that point the issue came up as to who is bound by this order that will now go into effect on January 6th, holding that the amendment is unconstitutional. And so the real question there is whether it applies only to Washington County and the Clerk of Court in that county or does it apply more broadly.

Kinane: What usually happens when a state constitutional amendment is found unconstitutional by federal judge? Does it usually apply to the whole state or just to the county where it was challenged?

Allan: Well, that’s going to depend. So, for example, let’s just assume that a situation was that there was a state officer in charge of marriage licenses. The fact that the lawsuit involved only that one person would actually then make it applicable to the entire state because, of course, that’s a state official. In this context marriage licenses are issued by clerks in individual counties. So there isn’t a state-level officer responsible for all of this. So as a technical, very technical, matter, you might be able to say that Pinellas County won’t be bound by this order because the Clerk of Court from Pinellas County wasn’t a technical party to the lawsuit. But in all of the other states with the exception of Kansas in which this issue has come up, officials have simply gone along with the order once it becomes final and not made these extremely technical distinctions about who is actually a party bound by the order.

Allan: I think that that was a technically defensible legal opinion in the sense that as an extremely technical matter, the clerk of court in Pinellas [County], for example, or Hillsborough [County], is not bound by that order because they weren’t a party. I think that it mistakes the writing on the wall. It is difficult for me to imagine that the Eleventh Circuit Court of Appeals would have refused to extend the stay beyond January 5th if the court was then going to turn around and reverse the order and say that the ban is constitutional. That just seems – not to quote The Princess Bride — but inconceivable to me and what that means, then,  that it is that this is a hyper-technical opinion to clerks and I think it frankly allows clerks to sort of hide behind that opinion.

Kinane: If there is a clerk of court that goes against that advisory opinion by their lawyers and does issue marriage licenses on January 6th what could possibly happen? I mean, could they be arrested?

Allan: Well, I mean, in theory — in theory — this would be a misdemeanor. But play out the scenario in which the Clerk of Court here in Pinellas [County], say, issues a same-sex marriage license on January 6th. Do we think there is any realistic possibility that Sheriff [Bob] Gualtieri is going to go arrest him and that he’ll be prosecuted by State Attorney Bernie McCabe? The possibility of that happening is so slim that I think it really it is meant to try to justify what really is really going to be a travesty in terms of requiring people to then file lawsuits in individual counties and then have the state pay thousands and thousands and thousands of dollars to defend each one of those suits.

Kinane: Those were my only questions, is there anything else our listeners should know about this issue?

Kinane: Meaning that there probably will be same-sex marriages in Florida, all throughout Florida, pretty soon or the Supreme Court will at least weigh in on that?

Allan: Well, I think the Supreme Court of the United States will at least weigh in on that. And the other wildcard that we have to also keep in mind that that state judges in southern Florida, for example in Key West, have also declared the ban on same-sex marriage unconstitutional. And those appeals are winding their way through the state court system here in Florida. So we have both federal court and state courts in Florida determining that this ban is unconstitutional. So that’s going to make this a very interesting period of time as competing federal and state courts weigh in on the same issue.