Ebola rages on in Sierra Leone, Liberia and Guinea while Nigeria offers lessons 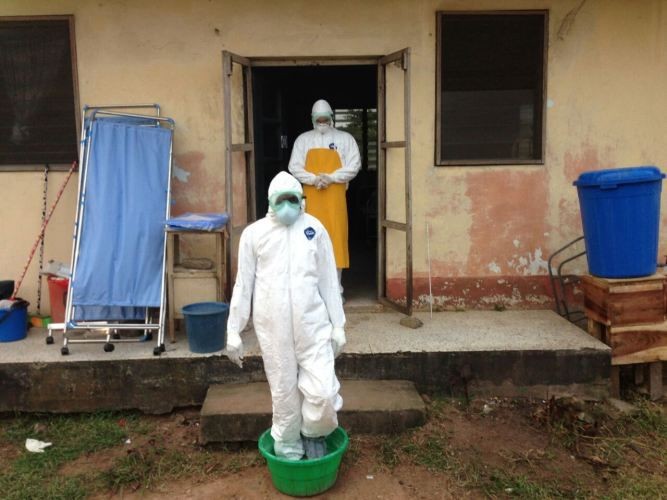 A healthcare worker in Glasgow has become the first confirmed Ebola patient in Britain. The unnamed woman returned to the UK from Sierra Leone on Sunday night, but is currently in isolation and health officials say the risk to the public is “extremely low.”

The government of Sierra Leone has banned public celebrations during the holidays as part of effort to combat the spread of Ebola within the country. More than half of Sierra Leone is under quarantine. No one is allowed to leave or enter quarantine districts without permission.

The West African states of Sierra Leone, Guinea and Liberia are the epicenter of the world’s worst-ever Ebola outbreak which has claimed more than 7500 lives. Yet Nigeria, another West African country affected by the virus, is Ebola-free after authorities promptly curbed an outbreak in the country. Sam Olukoya reports from Lagos.

The government of Sierra Leone drafted soldiers to enforce the ban against public celebrations during Christmas and New Year’s as a precautionary measure to prevent the spread of Ebola.

Sierra Leone, Guinea and Liberia are the three countries worst affected by the Ebola outbreak.

Professor John Wright, a clinical epidemiologist from Britain who is a volunteer in Sierra Leone, describes some of the measures that have been put in place: “Every building that you enter, the security guards – in place of guns – they have got these laser thermometers. They point them at your forehead check your temperature. Any sign of fever you don’t go any further. At the entrance and exit of every building, there are giant vats of chlorinated water. This is a country for you if you are an obsessive-compulsive hand washer, because there is a lot of hand washing going on.”

Unlike its regional neighbors, Nigeria effectively coped with the Ebola outbreak from the start. When the disease arrived in Lagos, Africa’s most populous city, many predicted the worst. But Nigeria moved quickly to contain the outbreak, and the World Health Organization declared Nigeria Ebola-free in October.

The effective use of quarantine to isolate suspected Ebola cases was one of the key reasons cited for Nigeria’s ability to successfully curb its Ebola outbreak. Dr. Adeola Majiyagbe, a public health physician, says one of the cornerstones of case management “is isolation, so we were able to keep Ebola within a limited few people so that really was key.”

There were times health authorities had to make a difficult choice between individual rights and public health. That was the case with Patrick Sawyer, the Liberian-born American who brought Ebola to Nigeria, infecting eight others before his death.

Sawyer, who was supposed to be under Ebola observation in Liberia, flew into Nigeria in July to attend a conference of the regional body, Economic Community of West African States, ECOWAS. Sawyer arrived at the Lagos airport with advanced symptoms of Ebola and collapsed there. He was rushed to a hospital.

When doctors took his blood samples to test for Ebola, Sawyer insisted on being discharged. But a doctor, Stella Ameyo Adadevoh, had to physically stop him from leaving the hospital. Bankole, who is Adadevoh’s son, said his mother came under threat from Liberian and ECOWAS diplomats who “were constantly on the phone with her, threatening to sue and to all sorts of legal actions, for violating his human rights they said. And my mother and the hospital stood their ground.”

The chief medical director of the First Consultant Hospital in Lagos, Dr Benjamin Ohaeri, says it was necessary to confine Sawyer to the hospital on public health grounds in spite of allegations of human rights abuses made by diplomats against the hospital. He says Sawyer “became very agitated, indeed violent. He pulled off his intravenous fluid and let the blood splash everywhere, he was very, very, very aggressive.”

Sawyer infected many of the hospital’s medical workers with Ebola. Four of them, including Dr. Adadevoh, died of the virus. Bankole says his mother made a huge sacrifice by stopping Sawyer from leaving the hospital. Otherwise, says Bankole, Sawyer “would had come into contact with easily hundreds of people and in a country like Nigeria where we have a hundred and seventy million people and people travel constantly between cities and states, it would have really been a big outbreak.”

Dr. Adedevoh’s action was widely praised here and many want the government to give her national honors. But forced quarantine measures have been met with resentment in some instances, especially in Sierra Leone and Liberia, where quarantines can include entire communities.

With the number of confirmed, probable and suspected Ebola cases in the current outbreak now over 19,000, authorities – especially in the worst affected countries – will come under greater pressure to balance public health and human rights.

Dennis Akagha, a Nigerian Ebola survivor, says countries battling the Ebola scourge have a lot to learn from Nigeria. He says one way this can be done is through the effective use of contact tracers. These are workers who trace people who have been exposed to Ebola patients. Akagha says the contract tracers monitor exposed individuals and “know their wellbeing, they know how they are feeling on a daily basis so that whichever of them develops the symptoms or being symptomatic, immediately they take the person to the isolation center and proper care and treatment will be given to this person.”

While it’s too early to say if the outbreak will come under control soon, it seems the most affected countries are now starting to apply the lessons Nigeria’s experience taught.