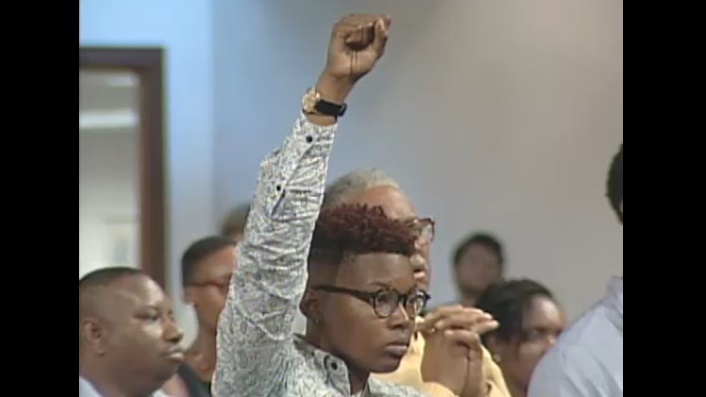 Screenshot from the Ebenezer Baptist Church livestream of the town hall meeting.

The first in a series of town hall meetings around the country between U.S. Attorney General Eric Holder and local leaders, law enforcement and the public filled the pews at Atlanta’s historic Ebenezer Baptist Church Monday night.

President Barack Obama called for the meetings after a white police officer killed an unarmed black youth in Ferguson, Missouri sparking public outcry both locally and nationwide. Last week, a St. Louis County grand jury announced that it would not charge Officer Darren Wilson in the shooting death of Michael Brown, sparking renewed protests around the country.

“Now while the grand jury proceeding in St. Louis County has concluded, I can report this evening that the Justice Department’s investigation into the shooting death of Michael Brown, as well as our investigation into allegations of unconstitutional policing patterns or practices by the Ferguson Police Department remain ongoing and remain active.”

And, he reiterated President Obama’s statement on police accountability and reform.

“And he announced a commitment of more than 263 million dollars to support a 3 year initiative that will invest in 50,000 body-worn cameras for everyone in this nation. Expansion of training for Law Enforcement agencies and more resources for police department reform. And multiply the number of cities where Justice Department leaders facilitate greater engagement between residents and local authorities.”

Holder’s remarks in the church where Reverand Dr. Martin Luther King Jr. once preached were met with applause, but so were many rousing speeches from community leaders and local residents.

Among them, Atlanta spoken word artist and activist Aurielle Lucier.

Lucier said the platform she was occupying was open thanks to the actions of young residents of Ferguson who refused to let Mike Brown become another statistic. Before she ended her remarks, Lucier brought attendees to their feet.

As her remarks came to a close, Goldie Taylor said the organizing in reaction to the Brown shooting is also preventative.

“If we don’t change something now, if we don’t gather ourselves and come to our senses and make meaningful change-now that means registering to vote because that’s who’s sitting on the Grand Jury-answer the jury summons. If we don’t’ make this change now, the next Michael Brown could be my son Josh Taylor. Or my son Thomas. The next Mike Brown could be your son, or your son. The next Mike Brown could be a young woman. And so lest we forget what brought us here, let us leave away with one thing in mind: let the issues remain where they are. Let them be justice. ”