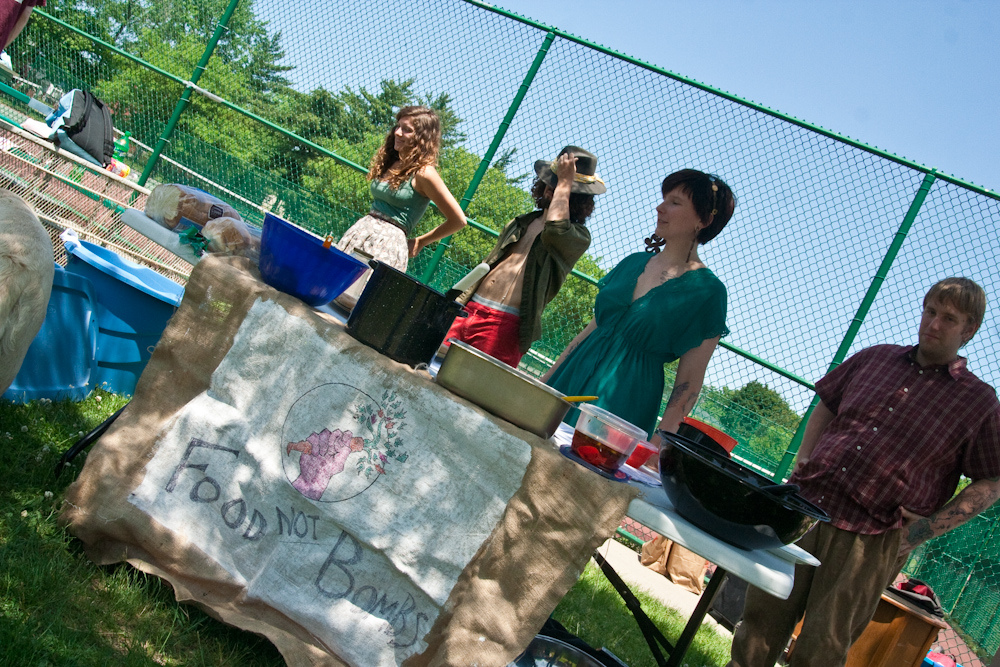 Stock photo of a Food Not Bombs feeding by Steven Depolo via Flickr. Used under Creative Commons license.

Tuesday a judge in Florida issued a temporary ban on citations or arrests for a controversial ordinance that outlawed most food sharings in Ft. Lauderdale public parks. Activists have likened recent city rules to making it illegal to help homeless people. Because of Tuesday’s decision by the judge to ban enforcement for the next thirty days, seven people who had been on hunger strike to protest Ft. Lauderdale’s ordinance could finally celebrate with a meal. Dezeray Lyn is with Tampa Food Not Bombs. FSRN’s Sean Kinane spoke with Lyn right before she broke her hunger strike.

Sean Kinane: You’re about to break your hunger strike. Tell us what that was for and why you’re breaking it.

Dezeray Lyn: The hunger strike was in response to the City of Ft. Lauderdale passing a series of ordinances. They’ve been termed ‘homeless hate laws’ that were making houseless activities impossible, making life more difficult. Amongst other things we were protesting the food sharing ban, which prohibited outdoor food sharing. So this was our response to that and our protest to that. And today there was a court hearing and a thirty day injunction was passed on the enforcement of that ordinance. So the seven hunger strikers currently are about to break their hunger strike.

Kinane: How long has it been since you’ve eaten?

Kinane: Tell us about yourself and the other people who are on the hunger strike — and Jillian Pim, who broke her hunger strike.

Lyn: Jillian Pim is with South Florida Food Not Bombs. She was on hunger strike for 24 days. A sharp decline in her health caused her to step back from the strike and seven people took the strike from her. It’s been difficult. I’ve lost seven pounds in nine days. What we all went through, we all know that is nothing compared with what the struggling community in Ft. Lauderdale and cities all over the country are going through. We’re happy that we can break the hunger strike, we’re happy that people won’t be criminalized for sharing food but by no means is this over and by no means does it lessen at all the suffering of the people in Ft. Lauderdale. So I’m happy that the judge did the right thing, but I hope that the City of Ft. Lauderdale actually takes steps now to address – in some meaningful way – the suffering of the people that need them the most in their community.

Kinane: Is there any way to tell if the judge was influenced, or if the city is being influenced, by your actions?

Kinane: And finally, what do you hope will happen next?

Lyn: Like I said before, what I hope happens now – unlike the people that are on the streets in Ft. Lauderdale, I can eat now. I don’t have anything stopping me from being able to get a meal. The people that are struggling down there are in the same position that they have been all this time. We’re just asking that the city take steps – instead of criminalizing people that are providing social services, instead of making life impossible and compounding problems for the struggling communities there – we’re asking them to take action. Something real to fix the problems, to address the root problems of mental health, veterans with PTSD, the physically disabled, children, families, joblessness that are causing homelessness in their community.