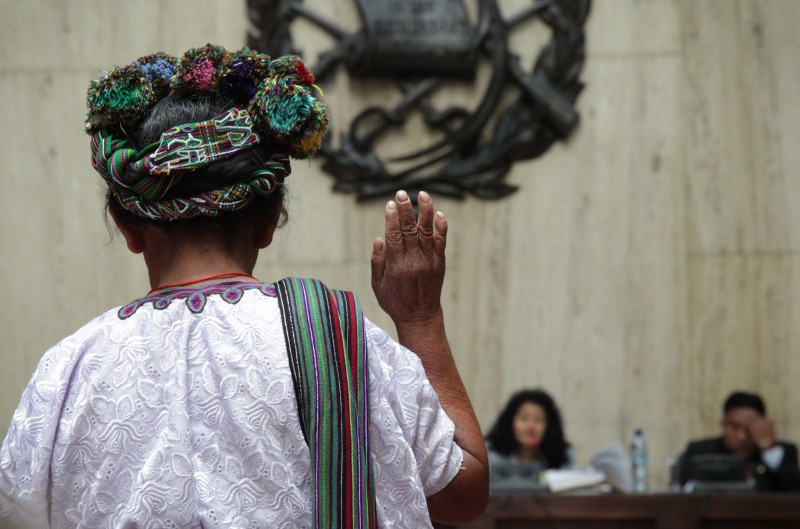 In May of 2013, a Guatemalan court found the country’s former de facto president guilty of genocide and crimes against humanity and sentenced him to 80 years in prison. The historic trial of General José Efraín Ríos Montt was for crimes committed against Guatemala’s Maya Ixil indigenous population in 1982 and 1983, a particularly brutal period of Guatemala’s 36-year armed conflict. A three-judge panel held that Ríos Montt was responsible for the deaths of more than 17-hundred villagers in his 17-month long military rule. Nearly 30,000 people were forcibly displaced.

A new trial begins Monday.  Last month, the Constitutional Court resolved the main issue that unraveled the first trial, clearing the way for the new proceedings to begin and restoring the validity of witness testimonies the first time around. However the matter of a 1986 amnesty law and whether it applies to Ríos Montt remains in question.

During 2013 trial, FSRN’s Shannon Young monitored the proceedings and filed this report on the dramatic scenes in the courtroom the day the judge suspended the trial and the convoluted legal process that ultimately led to the invalidation of the verdict.

Marilena Bustamante, sister of a man detained and disappeared by the Guatemalan military, cried injustice in the courtroom after Judge Carol Patricia Flores annulled weeks of testimony given by more than 100 witnesses, survivors, and experts in Guatemala’s historic genocide trial.

The case against former dictator Efrain Rios Montt and his then-chief of military intelligence Mauricio Rodríguez Sánchez marks the first time an ex head of state has faced genocide charges in a domestic court.

Judge Flores’ ruling brought the genocide tribunal to a grinding halt just as it was moving to the phase of closing arguments. The annulment of the genocide proceedings sets the trial back to its November 2011 pre-evidentiary phase.

Responding to arguments from the prosecution, Judge Flores denied her ruling amounted to a mockery of the victims and the justice system and said she was legally bound to make an impartial decision about a pending due process motion from the defense.

Defense attorneys argued Thursday the accused were the real victims for having been subjected to a “illegal trial.”

As defense attorneys spoke, Maya-Ixil survivors of massacres, gang rapes and forced displacement walked out of the courtroom. Many of them had attended the daily hearings for the past four weeks and given painful testimony of their experiences of a scorched earth military offensive in their homelands during 1982 and 1983.

Many witnesses, like Magdalena de la Paz Zedillo, testified about massacres. Speaking through through an interpreter, De la Paz Zedillo said her husband was taken away by soldiers and rural patrol men, locked in the town’s Catholic church, shot to death with 27 other villagers, and buried in a mass grave.

De la Paz Zedillo, who was pregnant at the time, said she fled into the hills for her life.

Other survivors testified about family members killed by soldiers and forced displacement into the hills where many escaped villagers died of sickness and starvation. The act of narrating traumatic experiences in public was clearly difficult for some witnesses.

Forensic experts testified that mass graves in the region included many bodies of elderly persons, women, and children – including infants.

One of the most powerful testimonies was given by Tiburcio Utuy, now in his 70’s, who personally witnessed killings and survived brutal military torture in 1983 which included having his teeth knocked out and a partial disembowelment.

“I’m speaking the truth because I went through pain and suffering with my own body,” said Utuy. “This is why I say it’s a lie what they’re saying, that there was no genocide. I say truthfully that there was because I saw it.”

Hours after the ruling, the office of a human rights group that’s been accompanying trial witnesses was raided by unknown assailants in the Ixil region municipality of Nebaj. The organization, whose name translates as the Unit for the Protection of Human Rights Defenders, said the raid came in the context of threats, intimidation and surveillance of genocide trial witnesses and human rights activists accompanying them.

The future of the genocide proceedings is uncertain. If Thursday’s ruling stands, prosecutors may have a difficult time convincing survivors to return to a courtroom to once again relive their experiences.

During Friday’s hearing, Judge Yasmin Barrios, head of the three-judge panel hearing the genocide case, said that the annulment ruling has no legal grounds, but suspended the trial pending a Constitutional Court decision on the challenge to the annulment.

Many of those who have attended the hearings filled Judge Barrios’ courtroom and cheered her decision to challenge the legality of Thursday’s ruling.

Survivors of the military offensive and the advocates who have worked 30 years to document what happened in the Ixil region in 1982 and 1983 have vowed to not give up on the genocide trial that was suspended just ahead of closing arguments.