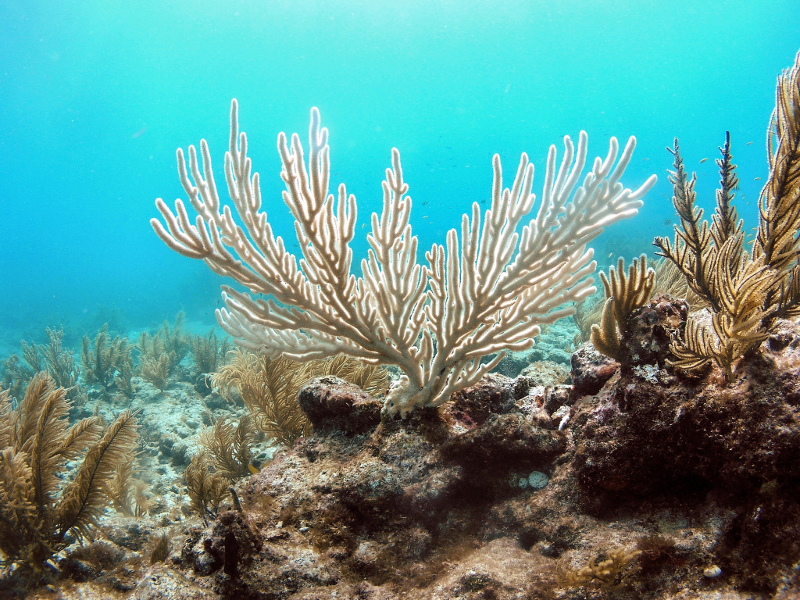 This summer could end up being one of the worst on record for corals in the Caribbean and Florida. First, they’re facing unprecedented levels of ocean acidification. The World Meteorological Organization’s annual Greenhouse Gas Bulletin, released this week, documents that atmospheric greenhouse gas concentrations “reached a new record high in 2013, propelled by a surge in levels of carbon dioxide.” That CO2, is absorbed by the oceans, turning them slightly more acidic. Organisms like corals find it more difficult to build skeletons at lower pH, resulting in reduced growth and survival.

But ocean acidification is not the only threat facing corals. A scientist at Mote Marine Laboratory in Sarasota, Florida says water temperature in the Florida Keys has been so high this summer that conditions over the next month could tip the balance of whether corals experience just a bad bleaching season or a devastating one. FSRN’s Seán Kinane interviewed Mote scientist Erinn Muller about this summer’s mass bleaching event and prospects for recovery.

Erinn Muller: Normally when you’re diving in a coral reef like in the Florida Keys, when you go underwater and you see the corals you’ll see lots of different, vibrant colors — so some of the corals might be brown or orange or even sometimes kind of a blue coloring. But what you will see right now if you go down to the Florida Keys is that a lot of these corals that are normally these bright colors are actually turning white. And they are turning white because the water temperatures are really warm this summer. Every summer the water temperatures of course are going to increase but in the Keys right now we’ve had a lot of calm, warm days. And because of that the water temperatures are increasing above normal levels this time of year. And that’s causing the corals to turn white. So instead of going down and seeing lots of beautiful colors, it’s going to look like it kind of snowed underwater, which is incredibly surreal.

Seán Kinane: And that’s not healthy for the corals. Some of the times they can recover, but it’s also possible they can not recover from this. What’s that dynamic like?

EM: Right, so corals have the ability to recover from bleaching, which is what we call the visual signs of them turning white. What that is actually caused by is – the corals really have their coloration because of this little microscopic algae that live within the tissue of the coral, which is an animal. So it’s a symbiotic relationship between the algae, that give it the color, and the coral animal, which is actually translucent. When the corals are stressed, such as now when the water temperatures are really high, that symbiotic relationship dissolves and the algae leave the coral. And so instead of seeing the algae coloring the color, you’re actually looking through the tissue of the coral animal and just seeing the skeleton that’s underneath, which is why the corals look white.

What’s really important is that these algae that are normally within the animal provide the coral with a lot of nutrients. And without those algae there the corals can actually starve and die.  They’re also more susceptible to things like diseases when they’re stressed – just like humans. So when they’re showing these visible signs of stress and they’re bleaching, pathogens are more likely to infect these corals and they can get sick and die that way as well. So it’s kind of a double-whammy.

SK: This isn’t the first time we’ve had a bleaching event in the Florida Keys. But can you compare the temperatures that we’re seeing right now with previous years and the extent of bleaching – compare that with some of the previous bad years.

EM: Well, from what I understand, the last major bleaching event was in 2005 in the Florida Keys. And I was doing most of my work in the U.S. Virgin Islands, which was the epicenter of that bleaching event in 2005. From what I understand within the Keys of Florida they did suffer a bleaching event that was substantial but compared with what we are seeing now, because we have still have at least a month of possible increasing water temperatures, this event could be even more severe than what we saw in 2005. So we really need is a lot of overcast and rainy, windy days that could potentially drop the water temperatures, reduce some of that temperature stress on the corals and prevent any catastrophe from occurring, so that we don’t have anything worse than what happened in 2005.

SK: At the end of the season in 2005, if I can recall correctly, Hurricane Wilma came through. Is it something where maybe a tropical storm or even a hurricane might actually end up helping these corals?

EM: Yes, that’s exactly right. So, you never want to, as a Floridian, hope for a hurricane. But one of the things we tend to quip is: a near-miss is OK, is what we’re hoping for. Because hurricanes will suck up a lot of that heat energy that’s within the water and cool those temperatures down. So we don’t want it to cause a big catastrophe on land or even the reef with all of the waves, but a near miss will suck a lot of the energy away. So a tropical storm that doesn’t much damage would actually help the reef a lot in this case.”

SK: And finally, can we tie this in, then, into climate change? Is this the reason we’re seeing high temperatures and these kind of almost unprecedented bleaching events?

EM: Absolutely it is, it’s all related to these cycles associated with climate change and most of them are related to the El Niño years, which are on a four to seven year cycle. These are cycles that have happened for many, many, many years throughout a very long time in history. But what we’re seeing now with climate change is that these events are becoming more severe and more frequent. So instead of us getting warm water temperatures maybe every eight to twelve years or so, we’re seeing these frequent four to seven year high-temperature events that are even more intense than what they were about twenty years ago. So instead of this being an anomaly it’s becoming more of a regular occurrence, which is having a significant amount of mortality that’s being caused by these events on the reefs in the Florida Keys.

So really we’re at a pivotal time right now determining whether or not this is going to be a very big catastrophe on the reefs in the Florida Keys or this is going to be just a really close call that we could be lucky and the temperatures decrease and the corals recover quite a bit. It’s hard to tell that right now but probably in a month or so we’ll know quite a bit more.