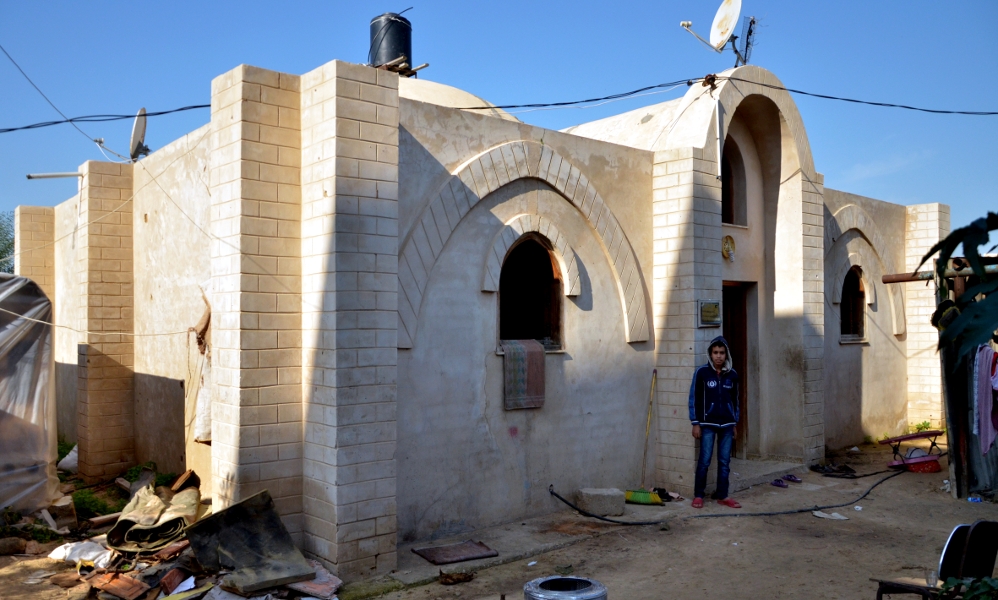 Efforts to rebuild Gaza remain slow as the raw materials necessary  trickle in past tightly-controlled border entry-points. A local civil engineer is reviving a plan to advance reconstruction with available materials. The project,  put into practice in a 2009 pilot program following the Israeli “Cast Lead” operation against Gaza,  is an alternative to rebuilding efforts that are dependent upon extremely limited supplies of cement and steel. FSRN’s Rami Almeghari has more.

Fifty-two year-old Moshref Al’er lives with his nine children in northeastern Gaza in an 80 square meter (260 square feet) home made of hardened and compacted sand and earth. His previous home was destroyed during Israel’s 2008-09 offensive known as Operation Cast Lead.

“This sand is similar in strength to cement, the bricks are as strong,” notes Al’er. He says his newer home has proven to be sustainable and protective. “I would say that building theses types of homes is a good idea as an alternative to tents. As you can see, the reconstruction process is barely moving and I think that a home like this can last for at least ten years.”

Aler’s home is one of several others, designed by local engineer Emad Elkhaldi. In 2009, the United Nations Relief and Works Agency for Palestine Refugees (UNRWA) and other international relief organizations funded the construction of the homes as part of a limited rebuilding effort. Homes like the one Al’er lives in cost $14,000 to build and can accommodate a family of eight members.

Elkhaldi, who specializes in alternative construction techniques, says the design is a modern adaptation of an ancient method.

“What is new now is that we rely in our design on making a mix of sand by compression,” he explains. “Over the past four years, we have worked on improving the quality of sand by adding some gypsum to the mix – about 2.5 percent. They slowly dry by covering the sand bricks to prevent moisture loss. Then, after we let them bake in the sun for a week, they’re ready to use.”

Elkhaldi hopes to be able to build more of his low-cost homes for people who remain displaced after last summer’s devastating Israeli offensive.

The Serry mechanism refers to a process for overseeing the importation of raw building materials  and is named after Robert Serry, the United Nations Special Coordinator for the Middle East Peace Process. Under the terms of the deal monitored by Israel and the Ramallah-based Palestinian Authority, imported materials are stockpiled in warehouses under surveillance then tracked via GPS. The stated goal of the surveillance is to prevent the use of the materials in the construction of underground tunnels. The Serry mechanism also requires those applying to receive materials to provide detailed personal information.

The process for distributing the materials has been slow. The Gaza-based economic ministry says that since October, more than 18,000 tons of cement have entered the Gaza Strip via Israeli border crossings. But that’s not nearly enough to rebuild the estimated 25 thousand housing units lost during the summer military campaign.

Meanwhile, Emad Elkhaldi says he has presented his project to several local and international organizations. So far, none of the organizations has agreed to funding Elkhadi’s rebuilding plan using locally available materials.