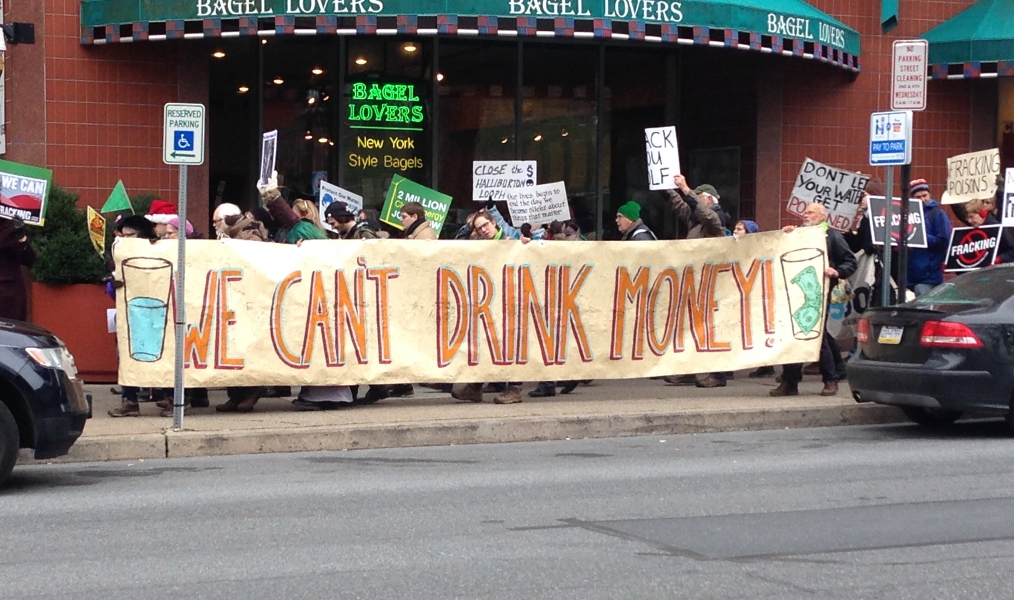 Democrat Tom Wolf was inaugurated today as the new governor of Pennsylvania, after defeating the Republican incumbent, Tom Corbett. Both are big supporters of fracking for natural gas, an industrial process that is turning many of the state’s rural areas into industrial zones, and some say, sacrifice zones. Protesters both inside and outside the ceremony at the state capital, Harrisburg, called loudly for a ban on fracking, even while many of the Big Green groups have vowed to work with the new governor on the issue. Melinda Tuhus reports.

A couple hundred people with Pennsylvanians Against Fracking yelled chants during the inauguration ceremony from a so-called “free speech area” behind the official site. Eight others with Stop Poisoning Pennsylvania blew whistles and yelled for a ban from among the pro-Wolf throngs at the ceremony, and were arrested.

Contamination of drinking water has accompanied the fracking process, though it hasn’t been definitively proven to be caused by fracking. Protesters carried a huge sign stating “We Can’t Drink Money.”

Air contamination is another issue.

Penni Lechner and her daughter live in western Pennsylvania surrounded by 25 fracking wells within a two-mile radius. She says a health monitoring group recently installed an air monitor in her home, which measures from good to hazardous air quality.

“When they were working on the most current recent well pad, it has reached hazardous and it was at very unhealthy and hazardous most of the time they were working,” Lechner told FSRN. “My daughter had headaches the entire month, she was sick and we both lost our voices. And for about a month now there hasn’t been any activity, the air with them not working has not gone above moderate. Our headaches have ceased, we got our voices back and we’re feeling better.”

According to a 2014 Quinnipiac Poll, 56 percent of Pennsylvanians support fracking. “And we support it because it’s a game-changing energy that’s being brought to the U.S. and it’s domestic,” said a celebrant at the inauguration from the Pittsburgh area, who declined to give his name. “It’s allowing us to be independent of foreign sources of energy.”

Pennsylvania is home to more than 8,000 fracking wells. In December, neighboring New York state banned fracking within its borders. Travis Windle, spokesperson for the Pennsylvania-based Marcellus Shale Coalition, points to the years-long moratorium on fracking in New York, saying the policy “has been in place in a de facto sense for the better part of five years. So from a practical standpoint, from a material standpoint, it shouldn’t and likely won’t have any impact on what’s going on in the Commonwealth.”

Near the end of his speech, Governor Wolf addressed fracking opponents, telling the protesters to help “develop these resources in a way that is clean, safe and sustainable.”

But they say the environmental problems associated with fracking make it inherently unsafe, and after the inauguration several people took suitcases marked Fracking Refugees to the open house at the Governor’s mansion. They say their homes are no longer safe so they’d like to move into the mansion, especially since the governor has said he has no plans to live there.

Randy Moyer had planned to visit the governor. He worked for a fracking waste company for four months in 2011, until severe health problems forced him to quit. “Flowback water got into my boots and up my feet and into my skin, and from then on all’s I had was rashes, headaches, irregular heartbeat, vision problems, ears leaked,” he told FSRN via a telephone interview. “It’s like being on fire 24 hours a day for two years, and nobody’s putting you out. It’s painful. Everything I’ve got is all documented through doctors. I have pictures ever since I got this stuff. He needs to see what fracking does to people.”

Moyer was unable to attend Inauguration Day events due to hospitalization.

Governor Wolf has tapped the head of the environmental group PennFuture for the top environmental position in his administration, and several Big Green groups have pledged to work with him.