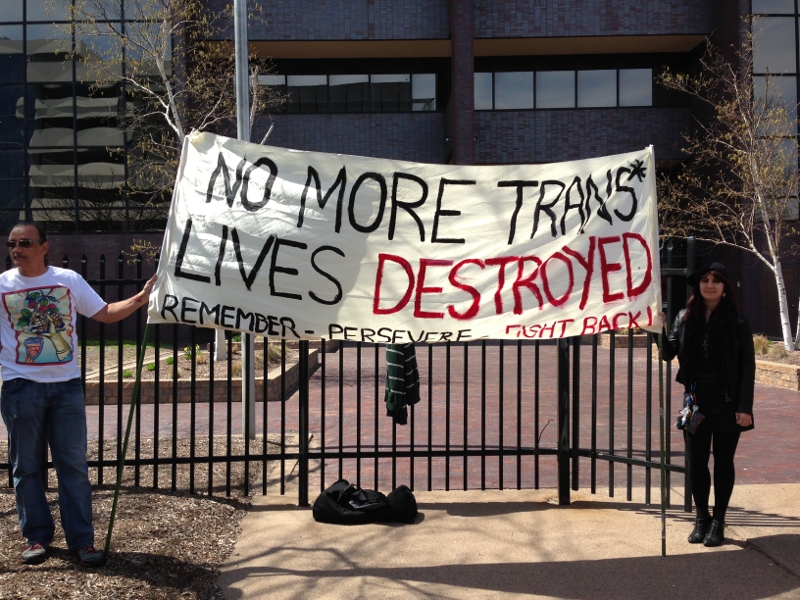 A passionate debate has erupted in Connecticut over the treatment of transgender juveniles under the care of the state. It focuses on one 16-year-old who was under the care of the Department of Families and Children but was transferred to the Department of Correction because of violent behavior, even though she has not been charged with, much less convicted, of a crime. The trans community nationwide as well as other supporters in Connecticut have demanded that Jane Doe, as she is known, be placed in a therapeutic setting to deal with severe childhood trauma. Melinda Tuhus reports from Hartford.

The transgender girl – that is, a person who was born biologically male but identifies as female – has been held at York Correctional Institution, the Connecticut state women’s prison, although she is not facing criminal charges. “Jane Doe” as she is known, to protect the minor’s identity, was transferred to the adult facility April 8th.

The Commissioner of the Department of Children and Families, or DCF, requested the transfer to the Department of Correction, saying that after Jane Doe attacked a guard at a youth facility in Massachusetts there was no appropriate place to house her under DCF custody. Lawyers for Doe say a restraining hold from behind triggered a trauma which resulted in a violent reaction. The injured guard filed a report, but declined to press criminal charges.

Kamora Herrington is the Mentoring Program Coordinator at True Colors, a non-profit that serves trans juveniles in Connecticut. She says the state’s Department of Children and Families on its own handles the needs of transgender children well, treating them as “the gender they are, not what their genitals are.” But she said when the courts or the Department of Correction gets involved, things deteriorate and children suffer.

“She did hurt someone significantly out of state,” said Herrington of Jane Doe. “When she came back there were big issues about where to place her, huge issues as to what’s going to be safe for her, and honestly, I am not saying that this transgender girl is any more violent than any other girl who has faced a lifetime of abuse. This child has faced lots of abuse. This child is a violent person.”

At a rally in front of DCF headquarters last week, Jerimarie Liesegang, a trans woman and founder of the Connecticut Trans Advocacy Coalition, read aloud from an op-ed Jane Doe published in the Hartford Courant:

“I have been involved with DCF since I was a little kid. There were lots of problems in my family, and DCF got involved to help me. Over the years, I’ve had many DCF workers. Some really tried to help me. Others did it for the paycheck.I admit that I have acted out and got into fights; many DCF kids fight with staff and other kids. I’m not saying it was okay, but I have a lot of stuff built up inside me and don’t know how to deal with it at times. They tell me that trauma changes people and makes them act out. Believe me, it does.

…I know I need to work on my issues, and I want to, but this is not the place.  What I have survived would have destroyed most people. I’m not going to let it destroy me. I can’t change what has happened, but I can build a future, just like every other 16-year-old.”

Liesegang’s organization has advocated for many trans women, especially trans women of color. She said that everyday life as a transgender person is challenging enough without the added burden of trauma. “People need to sort of step in the shoes of trans people,” she said. “What happens is, you’re basically struggling and fighting every single day of your life just to be who you are.”

Commissioner Katz declined to be interviewed for this story, but a spokesman for DCF said the department is working with Jane Doe’s lawyers and the Department of Correction to “move her to a more therapeutic treatment setting that will benefit her over the long term.”

Martha Stone is Executive Director of the Center for Children’s Advocacy in Hartford, which represents abused and neglected children who fall through the cracks of institutions that are meant to help them. She said the state has a variey of options: “You have foster care; you have therapeutic foster care; you have group homes; you have therapeutic group homes; you have residential treatment facilities; you have juvenile correctional facilities. The last place you want to put a child is an adult correctional facility.”

Doe’s court-appointed lawyer, Aaron Romano, said Monday that Jane has just started getting some education and minimal therapy in prison. He said nothing else has changed since Commissioner Katz met with Jane late last week. Just after that meeting, he told supporters there were “no specific steps that they gave her; there were no goals the Commissioner told her she had to meet; it was going to be an indefinite term of incarceration.”

On Thursday, Romano said DCF has cancelled all settlement talks and he is pursuing Doe’s case in federal court, once a person known as a guardian ad leitem is appointed to represent her interests. The goal is to get her transferred to a more appropriate facility and to make sure she gets the treatment she needs.

Kamora Herrington from True Colors said the institutional treatment of trans youth has further traumatized many of them. She mentioned another trans girl who a few years ago was placed into general population in a men’s prison, which was not a safe place. Advocates say they hope the publicity the Jane Doe case is generating will help improve the lot of other kids like her who have faced similar treatment in state custody.