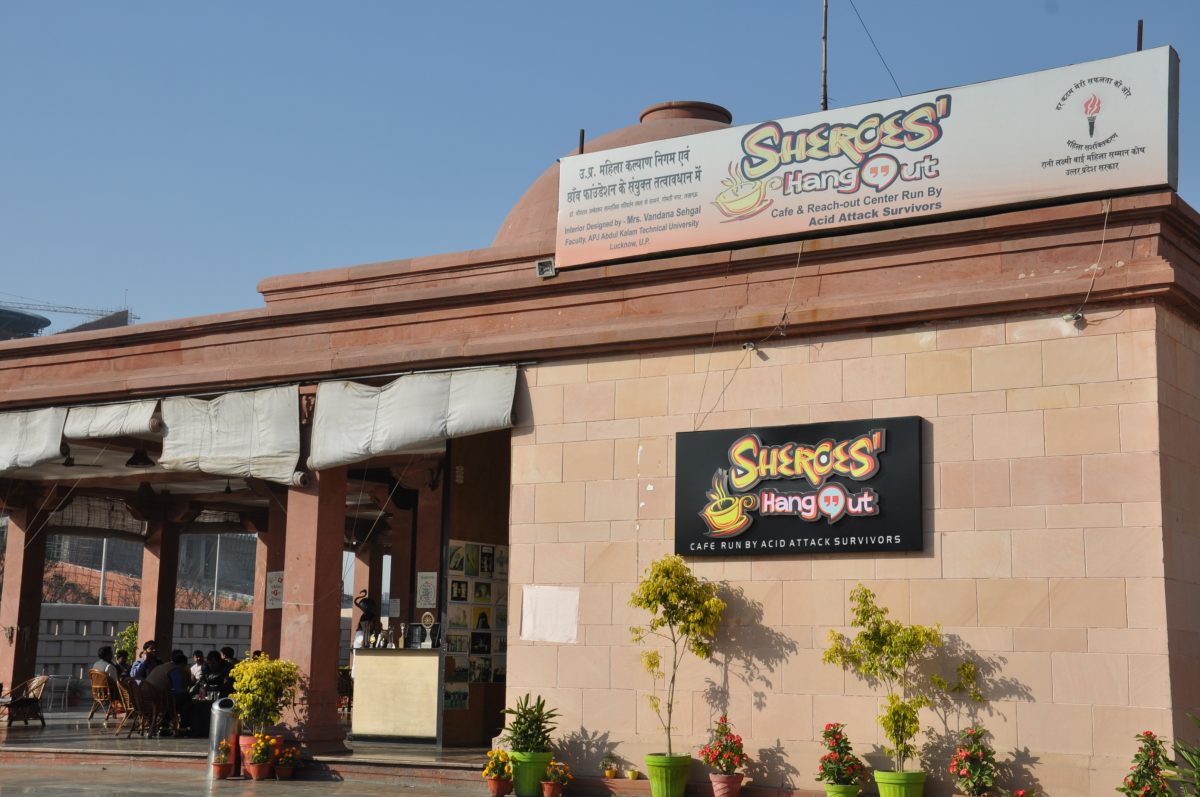 In India, more than 200 women a year suffer disfiguring acid attacks. Acid is most commonly used as a weapon in gender-based attacks stemming from rejection of sexual advances or proposals of marriage and as a form of extortion for dowry payments.

Such attacks are their own criminal offense in India, with sentences ranging from ten years to life in prisons, but the impunity rate remains high, with victims bearing the brunt of the medical and social costs.

FSRN’s Jasvinder Sehgal visits one project aimed at chipping away at the stigma that keeps survivors from coming forward to push for justice.

It is lunch time at the Café Sheroes in the central Indian city of Lucknow.

The cafe, which celebrates its first birthday on International Women’s Day this year, is run by survivors of acid attacks and their supporters.

“Sheroes, the name of the cafe, is a play on the word ‘hero.’ The acid survivors are like heroes who fight against atrocities, says Vivek Kumar, the manager. “The cafe is also a heroic effort to remove the stigma surrounding the victims and to spread awareness about acid attacks.”

The cafe is one of three in the Sheroes Hangout chain, which began in 2014 with a location in the Indian city of Agra near the world-famous Taj Mahal.

There are no fixed prices, but rather the pay as you wish contributions go towards the rehabilitation of survivors of acid violence in India.

“I was raped on December 11, 2008. I filed charges against the rapists. Their relatives started harassing me in retaliation,” recalls 28-year-old waitress Vimla Devi. “They severely assaulted me and threw acid on my face and neck. They inserted an iron rod into my private parts. Three times acid was thrown on me to force me to withdraw my complaint.”

Eight years later, Devi says no police action has been taken against the culprits: “None of them have been convicted thus far. They have threatened me repeatedly to drop the charges or they’ll kill my son and daughter. They have pressured the cafe owners to fire me. It’s very disturbing.”

The Lucknow cafe is located in the Indian state of Uttar Pradesh which has the highest rate of acid attacks in the country.

Acid attacks are a specific type of gender-based violence meant to permanently disfigure the victim. Sometimes the perpetrators are strangers or acquaintances, whereas other times, it’s a form of domestic violence.

Thirty-seven-year-old Azma Khan, who works in the cafe’s kitchen, was attacked by her then-husband and his family over what they considered an insufficient dowry payment.

“My father made many gifts as part of my wedding dowry. He spent almost 1 million rupees for a 32-dish banquet. But my in-laws and husband were not happy,” Khan explains. “I was seven months pregnant when my husband along with his brother, mother and sister grabbed hold of me and threw acid on my belly. I delivered a baby boy who died after four days of his birth due to the heat produced by the acid.”

In 2013, India’s top court passed an order to strictly regulate acid sales and maintain a database of acid buyers. But in practice, acid is still sold freely in the markets.

According to government figures, 225 acid attacks were reported in 2014 and 249 the following year. Acid attack survivor support groups say these figures are misleading and do not account for the many cases that go unreported.

But modest efforts like the Sheroes cafes at least try to remove the stigma that comes with disfigurement and turn victims into survivors.

And this International Women’s Day, the Sheroes Hangout initiative is receiving a presidential award of honor for this unique effort.