Deadline looming on the future of austerity measures in Greece 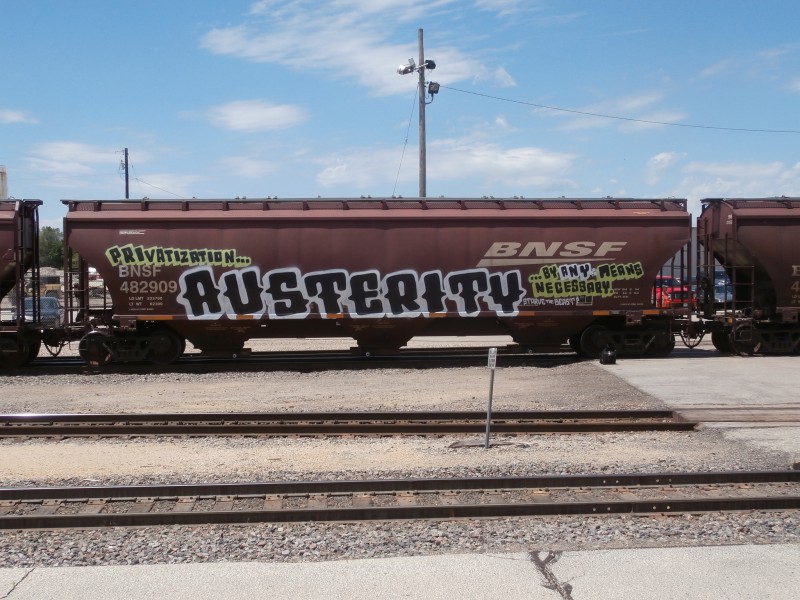 Greece’s newly elected left-wing government is facing a Monday deadline to find agreement with its creditors or face default and possible exit from Europe’s common currency. Talks between Greek leaders and European finance ministers progressed through the week in what has been the first real political challenge to the European Union’s imposed austerity policies that brought deep cuts to public investment and skyrocketing unemployment across southern Europe. FSRN’s Jacob Resneck has more.

That’s why austerity has become a bad word in much of Europe. For Greece, these policies have forced the slashing of public investment and privatization of public assets were the major strings that the IMF, European Commission and European Central Bank attached to a $273 billion dollar bailout.

But five years later and a bailout debt that’s 175 percent of the nation’s GDP, the left-wing Syriza party has swept to power on a platform of standing up to the country’s creditors in the face of plummeting standards of living.

Greece’s Finance Minister Yanis Varoufakis says that the austerity measures have failed to achieve their aim – that is to help Greece recover from the financial collapse.

“If you have a cow that is sick and doesn’t produce enough milk, and you start whipping it, and you whip it more and more and more to produce more milk, at some point it will die,” Varoufakis told Chinese broadcaster CCTV. “So, you won’t get the milk you want. This is precisely what’s been happening with the Greek economy over the last five years.”

In the first breakthrough, Greece agreed Thursday to formally negotiate with its creditors. Critics say that’s a major concession because up to now Syriza has said austerity policies are non-negotiable, but Athens clearly needs time to maneuver. The bottom line: either Syriza accepts an extension of the current austerity-based agreement, the Eurozone agrees to re-negotiate terms or Greece goes broke.

Euro Group chairman Jeroen Dijsselbloem said he was optimistic about technical talks but there were many hurdles ahead.

“I’m very cautious on the political side, it’s going to be very difficult, it’s going to take time, and don’t get your hopes up yet,” Dijsselbloem told reporters in Brussels.

Hugo Radice, a professor at the University of Leeds in England, says Europe’s austerity policies brought pain instead of recovery. But he says this is more about the political careers of European leaders than economics.

“The (European) leadership has boxed itself into a corner,” Radice told FSRN. “They have so much of their political capital tied up in austerity, that if they change direction now, then people are bound to say, ‘Then how come this policy that you’ve pursued for the past five years – austerity – suddenly you’re basically admitting that it hasn’t been working.’”

Radice is one of many economists who argue that austerity policies are driven by financial and political elites who want to drive down wages in order to make European businesses more competitive with the developing world.

“They have had a long-term strategy – the European business leadership especially – a long-term strategy of improving competitiveness of Europe within the global economy. They have decided the best way to do this is to cut the cost of labor and if they were to go into reverse, if they were to countenance things like substantial increases in minimum wages, improvements in benefits and pensions – they would then have to ask questions: ‘Well how do we compete internationally?’”

Greece’s economy is only two percent of the Eurozone total. That’s why this country’s defiance in the face of Europe’s paymasters is seen as significant. If Athens wins a renegotiation in this round it could start a chain reaction with other Eurozone countries – Spain, Italy and Ireland top the list – questioning whether austerity is really a necessary hardship on the path to fiscal health or a long-term strategy to drive down wages across Europe in the name of global competitiveness.