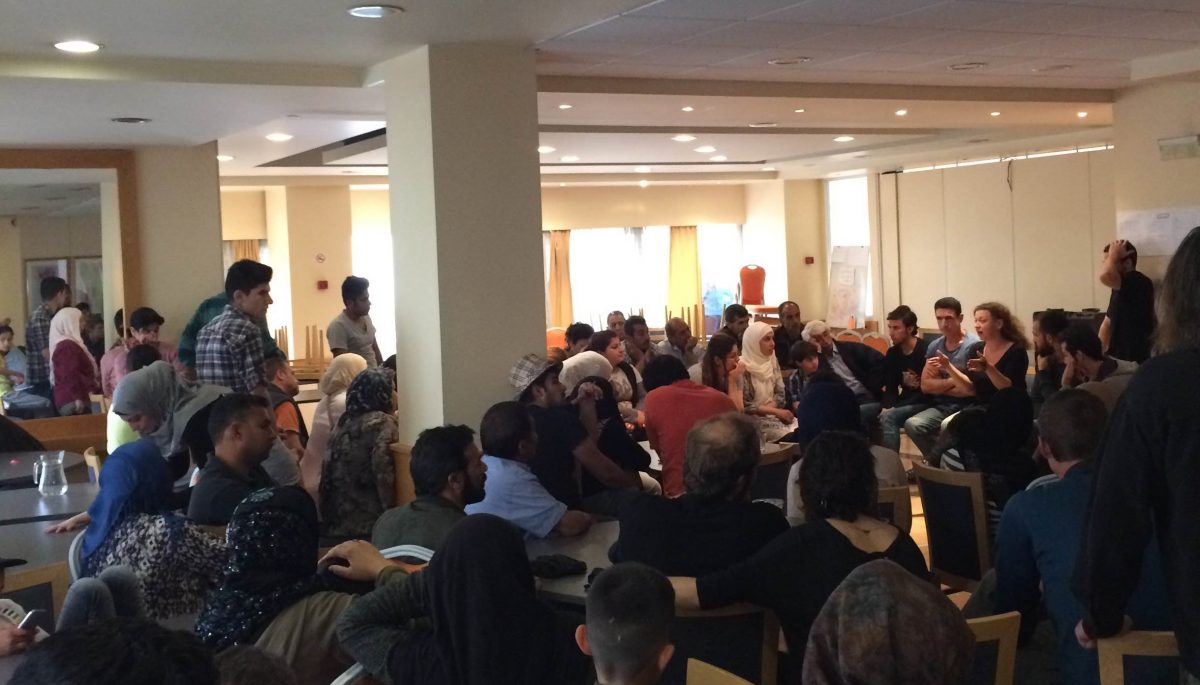 The abandoned hotel in Athens, Greece, that activists have turned into a sanctuary for refugees. (Photo credit: Andrew Connelly)

Since the closure of the Balkan borders, there has been a notable decline in the number of refugees arriving in Greece from Turkey, but what about the 54,000 that are left stranded all across the country? Most of them are homeless or living in poor conditions, but some Greek activists have begun to use civil disobedience to address a humanitarian crisis that the state is unable to handle. Andrew Connelly reports from Athens.

The spirit of political resistance so pervasive in the streets of Greece has spread into the reception of a long-abandoned hotel in downtown Athens. Radical Greek activists have occupied the seven-story building and transformed it into a cooperative sanctuary for hundreds of refugee families.

The border closures of Greece’s northern neighbors from Macedonia to Austria have trapped over 54,000 refugees in Greece, many of them homeless or living in squalid camps scattered the length and breadth of the country.

On an afternoon in May, the dining room of what was once a privately-operated three-star hotel known as the City Plaza is a cacophony of Greek, English, Arabic and Farsi as the daily assembly is held.

Loukia, one of the Greek activists behind the occupation, explains their motivation saying, “So the concept is to build new communities of coexistence between refugees and the local population. What is at the same time very urgent is to start to work with the idea and reality that we are going to live together. Because thousands of people were captured in Greece, they didn’t want to stay in Greece. You know, a lot of women here are waiting to go to Germany or other countries where their husbands are already.”

The UNHCR estimates that over 60 percent of Greece’s trapped refugees are women and children. The occupied City Plaza hotel offers them a respite, including for those who have decided to leave the makeshift camps near the sealed borders.

In April, in the border town of Idomeni, FSRN met Nesrine, an English teacher from Aleppo. She’s now in the Athens hotel, making a coffee with one hand while balancing her two-year old son Basel with the other. In recent weeks, Syria’s largest city has seen a relentless and deadly bombardment by President Assad’s air force.

“All the women think that if my husband will be in Germany, so will I too, in one month, two months, five months maximum I will be with him,” says Nesrine. “But it’s about one year without anything so I decided to go to this place alone by boat with my son just to reach that, my husband. I want to be with my family, yeah, I don’t know, I cannot hold alone all these troubled things.”

Nesrine’s husband, Zaher, fled Syria to Dortmund last year to find work, with the hope that family reunification laws would be able to swiftly and safely bring his wife and son across. Nesrine waited a year in Turkey, but as Germany struggled under the sheer weight of asylum claims, she decided to make the journey with her son. The limbo is hard, but Nesrine appreciates the efforts of the City Plaza activists.

“They are good people, yeah, nice people. Maybe because they are poor like us!” says Nesrine. “They don’t have that ideology thinking about material and money. They know about war, they lived a long time like the days that we lived.”

One of the hotel activists, journalist Yiannis Andrulidakis, has a deeper connection to his guests than most. His father was a Greek refugee from Turkey who subsequently fled to France to escape oppression under the military dictatorship of the sixties. Andrulidakis emphasizes the importance of sharing the duties of the hotel with the refugees, and helping them integrate into Greece, their unexpected new home.

City Plaza is a metaphor for Greece’s ailing fortunes. Built before the 2004 Olympics with loans freely given out in the boom years, the business folded shortly after as the country began its descent into chronic economic depression. The activists claim the boss withheld the employees’ salary, but Andrulidakis says the former workers are on their side, and support the hotel’s new role in alleviating the humanitarian crisis.

“Maybe 100 hotels opened before the Olympic Games, take the money and run, so now we have 100 empty hotels in the center of Athens, and at the same time 50,000 people who live in the streets. So it’s very easy,” says Andrulidakis. “The point of this squat, also, I think the symbolism is to show everyone that it’s very easy that people go to empty buildings, and we know it’s about 300 people here, that means it’s not 1 percent but 0.5 percent of all refugees in Greece and this is not a big thing. Some people thought about it, and we did it.”

Although an illegal occupation, for now, the authorities have left City Plaza alone, no doubt grateful that it’s a few hundred less refugees for them to worry about. As the evening draws in, an American blues musician plays for children from Syria, Iraq, Afghanistan and beyond. Thousands of refugees remain homeless in Greece, many of them locked up in detention centers on the Greek islands. But tonight the City Plaza will shelter 400 guests, and in doing so, providing a glimpse of an alternative approach to housing asylum seekers, far removed from segregation and incarceration.