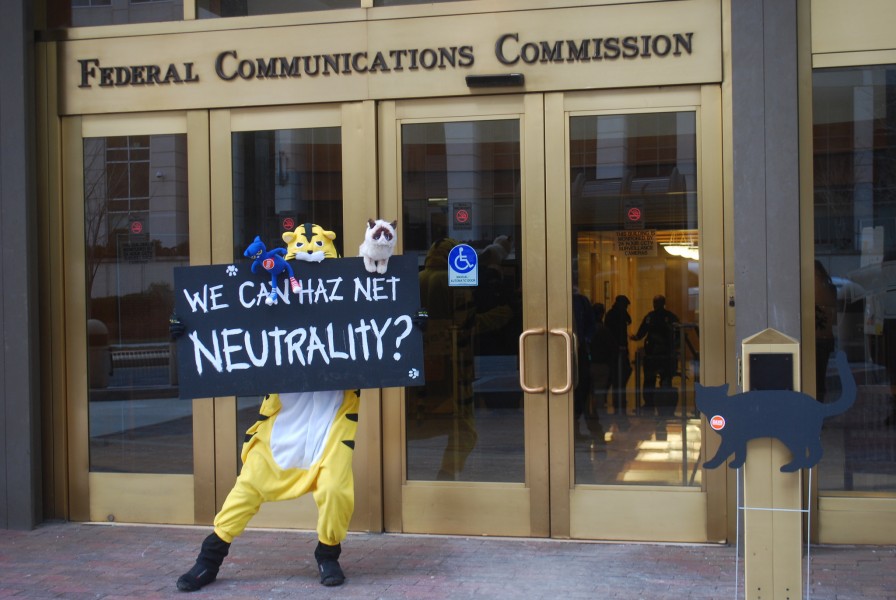 Costumed demonstrator outside the FCC supports the proposal to regulate the internet as a utility. (Photo credit: Free Press via Flickr / Creative Commons)

The Federal Communications Commission, or FCC, will soon vote on a proposal by Chairman Tom Wheeler to classify the internet as a utility. Many net neutrality advocates seen this as as a victory, but Republicans on Capitol Hill are crying foul over what they say is another example of President Barack Obama’s executive overreach. Anthony J. Rivera reports from Washington D.C.

Republican members of Congress may be regrouping this recess after six rough weeks in their new role as the majority. But when the GOP gets back, they’ll have to sit on the sidelines as the fight over net neutrality potentially reaches a new milestone at the FCC.

On February 26th the commission will vote on a proposal by its chairman, Tom Wheeler, to regulate the internet for the first time under a provision called Title II which would treat it as a utility.

Back in November,  President Barack Obama called on the FCC to implement these “common carrier” regulations and received swift condemnation from conservatives. Now that the Title II vote is imminent conservatives have threatened legal action and called into question the independence of the agency.

Michael Powell is the former Chairman of the FCC, appointed by President George W. Bush, and the current president of the National Cable and Telecommunications Association, or NCTA — the industry’s top lobbying group. He says his organization is ready to go to court if the proposal passes.

“I think it’s just too dramatic,” Powell says, “too serious a change not to ask the court to review the propriety of what the commission did particularly when so much of it rests on whether they have the authority to do it in the first place.”

Others question if the motivation behind the opposition to Wheeler’s proposal is really about balance-of-power within the government.

Malkia Cyril is the Executive Director of the Center for Media Justice which supports Title II regulations. She says major internet service providers, or ISPs, are looking out for their bottom lines.

“Companies like Verizon, Comcast and AT&T they don’t look at the Internet the way you and I do,” she told FSRN by phone. “They look at it like a cash cow. It’s an extremely lucrative platform as well just like television, just like radio. And just like television, radio and print news they would like to consolidate it. They would like to own it. They’d like to own it all and Title II is the authority that gives the Federal Communications Commission the ability to say, ‘no, actually you can’t own it all.’”

The GOP in Congress isn’t just advocating for a legislative solution to the net neutrality issue,  they’re also putting Chairman Wheeler on notice that they’re reviewing the process by which he arrived at his proposal.

“We’re doing an investigation, we’ll see where that leads,” said House Oversight Committee Chairman Jason Chaffetz. The Wall Street Journal reports Chaffetz has requested a committee briefing before the FCC’s vote. He has,  along with Senate Homeland Security and Governmental Affairs Chairman Ron Johnsonm,  requested all documents and correspondence relating to the FCC and the White House.

What are Democrats on the Hill saying? Many fall in line with the President’s statement.

California Congresswoman Anna Eshoo is an outspoken supporter of strong regulations to protect the internet. Others, however, give a pretty muddy stance on the issue or express a private ambivalence. Illinois Congressman Bobby Rush says he’s crafting his own net neutrality legislation but is a little light on details.

The final draft of whatever legislation Rush is working on is a toss up some say and maybe for good reason.  According to OpenSecrets.com he’s received over ten thousand dollars in campaign contributions from Powell’s NCTA in the 2014 cycle. Verizon and AT&T were also big donors.

House Energy and Commerce Committee Chairman Fred Upton held a hearing on the FCC’s plan for net neutrality last month and has introduced net neutrality legislation. His bill would undercut Title II regulations. He’s received roughly $20,000 from the NCTA and nearly a $100,000 combined from Comcast, Verizon, AT&T and TimeWarner Cable.

Those in favor of Title II regulations say people should follow the money and realize this is really just outrage manufactured by these ISPs. Tim Karr is a spokesperson for the advocacy group Free Press which supports net neutrality. “There’s nothing unusual about this,” he said in an interview. “The only thing that is unusual is that net neutrality foes have decided that this is a good opportunity for them to try and stir up controversy, to try to suggest that somehow protecting the open internet is the equivalent, in their words, of Obamacare for the internet.”

Time is running out before the FCC vote and Congress is losing this week to recess. That means those net neutrality ads starting to pop up on our television screens are going to continue as this issue likely follows the path to litigation.