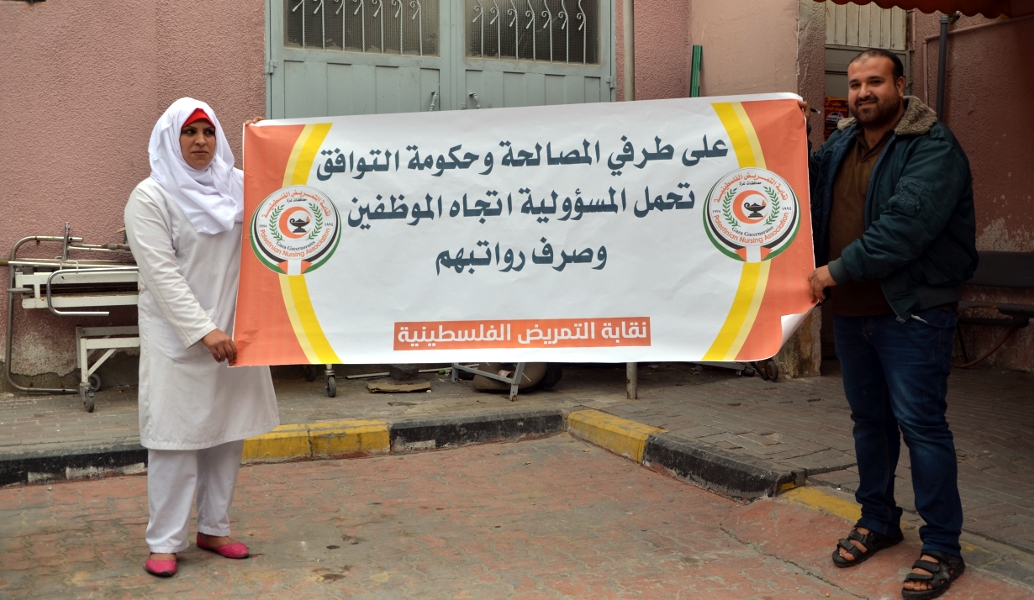 Two healthcare workers from the Khan Younis Nasser hospital hold a sign that reads "Both sides of the conciliation should hold responsibility, by paying the salaries." (Photo credit: Shadi Alqarra)

Tens of thousands of public sector workers in Gaza, both civil servants and members of the armed forces, are struggling to get by. They haven’t been paid since Hamas relinquished control over the Gaza Strip to a consensus government ­­ seven months ago. In the last few months workers in many government sectors including education, healthcare and civil defense have staged a number of protests demanding payment of their salaries. FSRN’s Rami Almeghari has more.

Eid Sabbah, the head of the government nurses’ syndicate in Gaza, calls for stepped up protests at a rally by government health workers at the Nasser hospital in southern Khan Younis. The health care workers have not been paid since last June.

Among them is Abdallah Alhourami, a 47-­year-­old nurse in hospital’s orthopedics department.

“Less than one month ago, I had to request a day off from the hospital despite my responsibility as a staff­ nurse,” Alhourami says. “Can you imagine, why? Because I could not afford transportation from Rafah to Khan Younis ­ which are close to each other. I had to stay at home until I could come up with money for transportation.”

Alhourami says that he is now in debt to local grocers almost $2,000.00.  Last January his wife miscarried inside their Rafah home.­ Abdallah couldn’t afford to take her to the hospital for treatment. And two of his children were forced to quit college.

Healthcare workers are among many in the public sector who continue to work without pay, ensuring that vital services remain available to Gaza residents. They do so, however, at great cost.

More than 40,000 Gaza-­based public employees face similar circumstances. They haven’t been paid in the seven months since the current consensus government was sworn in and Hamas ended its governance of the coastal territory as part of a unity deal between Hamas and the Fatah party of Palestinian president Mahmoud Abbas, ending seven years of political split.

The stalemate over salaries stems from a disagreement over the status of public service workers on the job in 2007, when Hamas took control of the Gaza Strip. The current government says workers who lost their jobs then should be reinstated, while Hamas insists that the current staffing remain intact.

In response to the salary crisis at hand, the Palestinian General Federation of Trade Unions in Gaza says that President Abbas has the power to order that checks are issued “immediately” and should do so.

“If the parties concerned agree that the national interests are a priority, the problem can be solved overnight,” according to Sami Alamasy, head of the Palestinian General Federation of Trade Unions in Gaza. “It’s not a matter of the number of employees, whether they are 40 thousand or 50 thousand.”

Alamasy says that public sector salaries must be paid or workers will be forced to strike. He also says that once the issue of salaries is resolved focus can then be placed on what he calls the greater issues “like ending the siege, reconstructing the region and establishing a seaport, which all were announced following the last Israeli war.”

Gaza-­based political factions like the Popular Front for the Liberation of Palestine, the Palestinian People’s Party and the Islamic Jihad all demand that both Fatah and Hamas advance last April’s unity deal.

A planned meeting of the Palestine Liberation Organization’s representatives in Gaza has yet to take place.