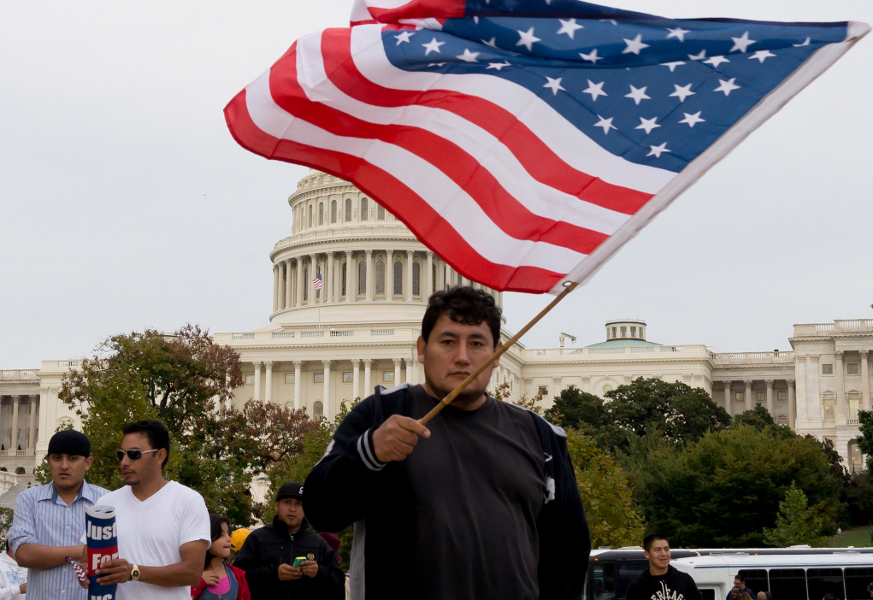 A Texas judge has temporarily blocked the implementation of executive actions by President Barack Obama that would have shielded millions undocumented immigrants from deportation. The injunction backs the state of Texas and 25 other states that filed a lawsuit that argued the president had overstepped his authority. Ashley Westerman reports from Washington, D.C.

In his ruling Monday from the border town of Brownsville, Texas, U.S. District Judge Andrew Hanen said that Obama failed to comply with the provisions of the Administrative Procedure Act when he announced a package of executive orders regarding immigration in November. The provision Judge Hanen is referring to stipulates that a proposed rule be posted for notice and comment before its issue.

But Melissa Crow, legal director of the American Immigration Council and co-filer of an amicus brief in opposition to the case, said on a conference call Tuesday the Administrative Procedure Act also forbids the review of rules that are under the discretion of an agency. In this case, the Department of Homeland Security. “For literally decades, courts have declined to review the kinds of initiatives that are at issue in this case,” she said. “So we continue to believe that the President and the agency are well within the bounds of their authority.”

The specific programs blocked by Hanen would have allowed some five million undocumented immigrants to apply for legal status. On Tuesday, the Department of Homeland Security said it was suspending the program for now. The White House has said the Department of Justice will appeal Judge Hanen’s ruling.

National Immigration Law Center Executive Director Marielena Hincapié said on the same conference call that this most recent ruling does not affect the original Deferred Action for Childhood Arrivals program announced by the administration in 2012 “nor does it affect the renewal of people who have DACA.” She added that the injunction “does not affect the president’s other policy announcements made on November 20th such as the different priorities for immigration enforcement in the interior or at the border.”

The ruling has been applauded by Texas Gov. Greg Abbot, who filed the initial lawsuit in December as the state’s then Attorney General. In a statement, Abbot said Judge Hanen’s injunction “rightly stops the President’s overreach in its tracks.”

But Michael Seifert, coordinator of the Rio Grande Valley Equal Voice Network, says it’s a slap in the face to the communities on the border where all people want it to do is work and contribute. “For the judge to take the time and for the states to spend that kind of money on a temporary stop on something that’s a relief is astonishing,” he told FSRN in a telephone interview. He says Hanen’s ruling just doesn’t make any sense, as businesses stand to earn millions of dollars.

Seifert, who has lived in the border area for 26 years, says the people who make national immigration policy are out of touch with those who actually live and work in the border region: “It’s so transparently political. They don’t seem to realize that it plays with people’s lives; it stops families, it separates families, it causes all kinds of anguish.”

Judge Hanen’s ruling also comes as Congress remains gridlocked over a deal to continue funding the Department of Homeland Security, which will run out of money next week. The House has passed a bill that would fund DHS through September, but strips away funding for President Obama’s executive actions. The Senate has yet to come to any kind of agreement.