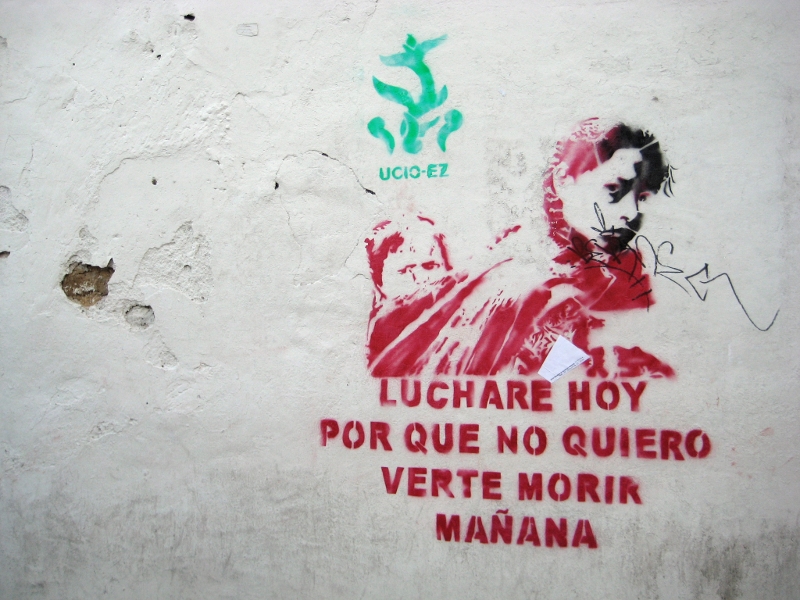 Protest stencil art reads "I will fight today because I don't want to see you die tomorrow."

In Mexico, authorities have discovered 61 decomposing bodies in an abandoned crematorium in Acapulco in the southern state of Guerrero. Shannon Young reports from Oaxaca.

Residents of the community near the facility reportedly complained to police about a putrid smell coming from the building, which is located along a major thoroughfare in the resort city. Local and state police, as well as military personnel, emptied the building between the late night hours of Thursday and early Friday.

Guerrero is the Mexican state where 43 students from the Ayotzinapa teachers college disappeared in September after they were taken into custody by municipal police in the small city of Iguala.

Federal authorities say criminals with the Guerreros Unidos drug gang killed the students and burned their bodies in an open air dump near the town of Cocula. In December, a group of scientists from Mexico’s National University released an analysis stating that the heat needed to reduce bodies to ashes would not be possible in an open-air fire.

One of those scientists is Jorge Antonio Montemayor. He told congress members last month that one of the lines of the government’s investigation “should be a search in private crematoriums and funeral homes as well as army crematoriums.”

As of deadline, little official information was available on the 61 bodies found in the abandoned crematorium in Acapulco. A local newspaper, El Sur de Acapulco, reported most of the bodies were male, many had been wrapped in sheets and all had been covered with quicklime.

While multiple mass graves containing dozens of bodies have been uncovered in Mexico in recent years, the case involving the crematorium is the first of its kind.

More than 22 thousand people have gone missing without a trace in Mexico in the last eight years according to official figures, but human rights groups say the real number of the so-called “disappeared” is likely much higher.