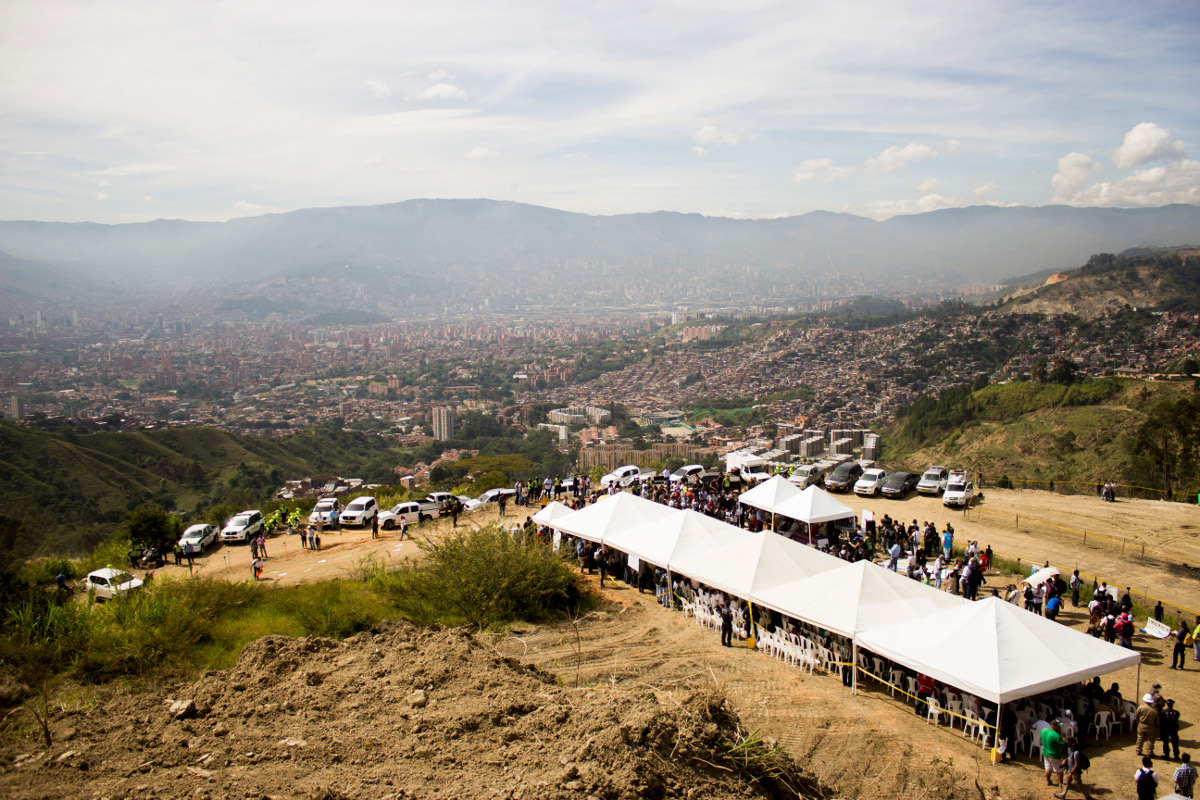 On July 27, 2015 - nearly 13 years after Operation Orion, Colombian investigators began exhuming what they consider to be the world's largest urban mass grave.

Investigators in Colombia’s second largest city began work this week to exhume human remains from what is considered to be the world’s largest mass grave in an urban area. Lewis Reining reads for Jorge Luis Rocha in Medellín.

A formal event Monday kicked off what is to be a five month search in La Escombrera, a massive rubble dump located on a hillside overlooking Medellín.

Discovering just how many bodies lie hidden under the tons of waste will be a job for forensic investigators, but the confession of a former paramilitary boss suggests at least 300 bodies were dumped there.

Gustavo Andrés Duque, the special investigator in charge of the exhumation, says the team is more likely to encounter remains like “long bone fragments and teeth” rather than intact skeletons. He adds that all forensic evidence will be DNA tested and kept in a special facility.

Many of the victims believed to be buried in the rubble date back to a series of urban counter-insurgency operations carried out in 2002 by the government of then-president Alvaro Uribe. The largest of these was Operation Orion, a military-led effort targeting leftist militias and urban guerrillas in the sprawling working class district known as La Comuna 13.

Operation Orion lasted five days in October of 2002 and involved the use of armed helicopters, tanks and more than one thousand soldiers. The government said the operation resulted in 11 deaths, 200 wounded and 243 arrests, but local residents have long told a different story.

“There were more than 500 arrests,” says Father Javier Giraldo, a Catholic priest and human rights defender who has accompanied families of victims while documenting crimes committed against the civilian population during Operation Orion. “They had to let most of them go within a month due to a lack of evidence,” Father Giraldo continued. “The army would surround a block, people would come out of their homes terrified and they’d grab all the men, especially the young men. They’d ask for their identifications and confiscate them. Police investigators carried around blank forms and they’d use the id cards to fill them out. They pretended like they had arrest warrants. This was all in flagrant violation of the law.”

Many young men picked up for questioning never returned.

Sixty-three-year-old Gloria Holguín is the mother of Carlos Emilio Torres Holguín, who vanished in November of 2002 after three men in plainclothes stopped by his girlfriend’s house in the Comuna 13 and insisted he go with them to have a talk.

“But that conversation has yet to end because he still hasn’t come back,” says Holguín. “Ever since then, I’ve searched for him everywhere. I’ve filed reports everywhere and haven’t had a response. My daughters still say that they didn’t just lose a brother, but lost a mother as well because I no longer did my housework. I spent more time in the street than at home.”

Not long after the mass disappearances began, rumors began circulating about the disposal of bodies in the rubble dump. By then, La Escombrera was territory under the total control of the AUC, a hyper-violent right-wing paramilitary network. Government officials argued that it was too dangerous to attempt to carry out an investigation given the presence of armed groups.

Yet even after the  government reached a demobilization deal with the paramilitaries, La Escombrera remained in operation, with trucks dumping ever more tons of rubble on top of the hidden victims.

“The government’s response came very late,” says Gloria Holguín. “Everyone knew that bodies were brought here, buried here and covered with rubble and yet it was allowed to keep operating as a dump. If the response would have come two or three years after Operation Orion, the process of identification would be much easier.”

Now nearly thirteen years after Operation Orion, mothers and other relatives of the disappeared anxiously await the results of the dig with the hope of being able to finally bury their dead with dignity and begin the process of closure.