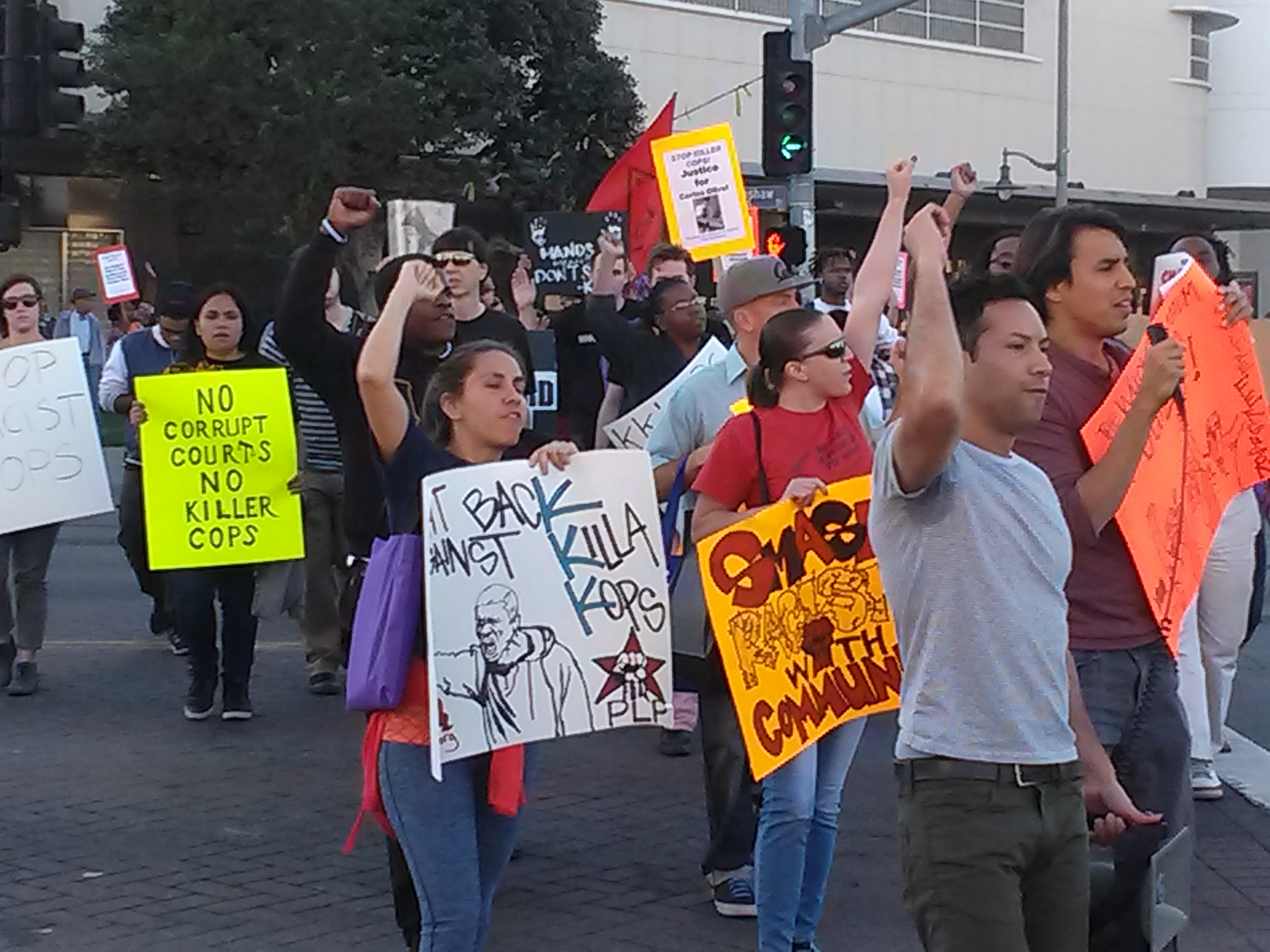 A St. Louis County grand jury’s decision not to indict officer Darren Wilson in the killing of unarmed black teen Michael Brown sparked days of protests — not just in Ferguson, Missouri but in more than 100 cities throughout the U.S. FSRN’s Larry Buhl got reactions Tuesday from several protesters in the Crenshaw district of Los Angeles.

Diane Hirsh Garcia: “I’m here because I’m outraged that the guy wasn’t indicted. It’s clear that he should have been indicted, that the prosecutor wasn’t looking to indict him and that there’s no justice in this country for black and brown people and it’s getting worse and worse and worse. The only exciting thing is that a movement seems to be growing against the police brutality. It’s like we’re back in the 60s and only things have not improved. I was there at the time and involved. A lot of young people are out here and I hope a sustainable movement develops to fight against the problems that exist in this society.”

Susan Milman: “I am here because I am so angry at what is going on in this country. The killings and murders of black men and the incarceration of people of color at a rate that is more than any country in the world. I was particularly angry about the murder of Michael Brown and the way it was handled by Ferguson. This was not a case that should have gone to the grand jury in the way that it went. It was a travesty. It should have been open. It should have gone to a preliminary hearing. This prosecutor wanted it to fail. And it did.”

Keith James: “I’m with the Stop Mass Incarceration Network. But this is actually unprecedented what’s happening here, not just in Los Angeles, but throughout the country, Ferguson and many, many other cities. Wilson walking free, this is a rubber stamp on Michael Brown’s murder. It’s a rubber stamp on the murder of all black and Latino youth. It’s a green light for other black and Latino youth to be shot down by cops and racist vigilantes. And we have to say no. We have to say no business as usual. We’ve got to be out in the streets. We’ve got to put America to a halt. If you’re an athlete, stop playing. If you’re a professional musician, cancel your performances. If you’re in school, shut them down and either hit the nearest intersection, or turn your schooling into a history lesson and a present day lesson on the oppression of black and Latino people and the murder of black and Latino people by this country.”

Julia Mangione: “I’m here to stand in solidarity with the members of my community. I moved to Los Angeles six years ago and I’m not leaving. This is a community I’m invested in. And even though the color of my skin is different, that doesn’t mean my life is worth more any more than any other. I’m here today to make these voices louder, to leverage my privilege, to fight for change. It’s disgusting that they can’t even charge him with involuntary manslaughter and he won’t even see a trial. Darren Wilson committed a crime. He killed someone. And the fact that he can walk away without even seeing a trial is horrific. It doesn’t matter that he’s a cop.”

Eric Bost: “I’m here in association with the National Lawyer’s Guild. I’m doing legal observing today. I’m also here in support of the movement against police abuse and murder. I see people charged on the most flimsy evidence every day in grand juries. It’s really striking. You look at the statistics. One out of 156 cases do not pass through that step to lead to indictment. It’s such a miniscule number of cases that don’t pass through that step to indictment. And guess what, the cases in which it doesn’t go to, are the ones that involve the police shootings. It’s a gross miscarriage of justice. It’s systemic. And it’s symptomatic of the broader problems with our criminal justice system and with police practices. One of the most effective way to tamp that down is to document police abuse and be there to make sure people can express their views in a free speech manner.”