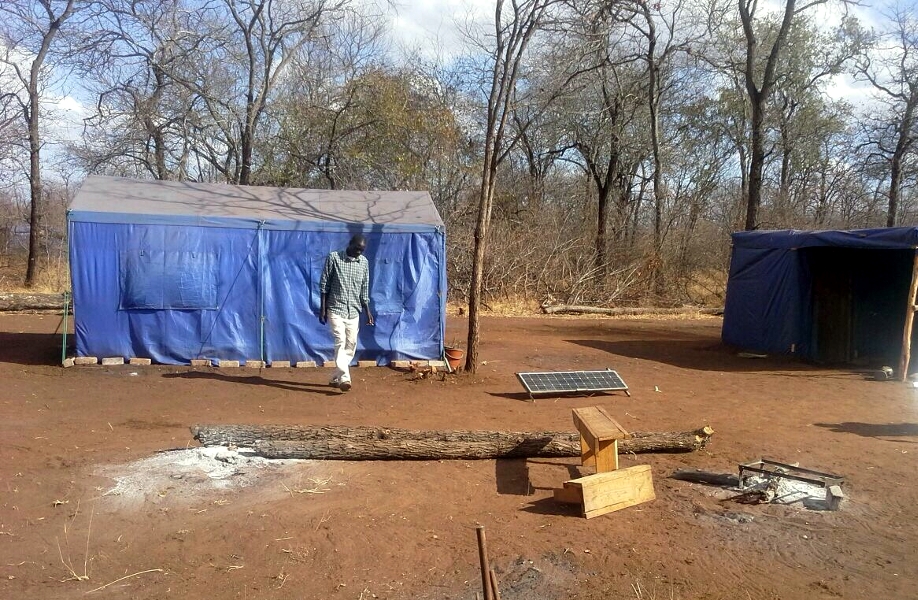 Villagers forcibly displaced as a result of the dam project continue to live without adequate shelter or compensation one year later. (Photo credit: Garikai Chaunza)

It’s been a year since the government of Zimbabwe forcibly relocated at least 20,000 villagers from their traditional homelands in Masvingo to make way for a dam project. At the time of the relocation, villagers were promised compensation packages and access to the benefits of the dam. But as Garikai Chaunza reports, many of the displaced are still living in makeshift shelters without access to basic services.

A year ago, the government forcibly relocated more than 3000 families from the humid and mild Masvingo dam basin to the hot, arid lowlands of the Naunetsi Range nearly one hundred miles south. Many of the relocated are still here, living in tents and makeshift shelters.

Among them is Wanisai Muzenda, an HIV-positive widow with five children. She says the area’s only local clinic is overwhelmed by the huge number of people visiting every day with different ailments.

“Every day when you visit the local clinic you hear that 10 or more people have died of malaria, and others bitten by scorpions will be waiting for medical attention,” remarked Muzenda.

She says poor water quality is also a problem. Salty water drawn from boreholes is undrinkable and can only be used for domestic purposes.

Kenneth Shavano is a retired soldier and veteran of Zimbabwe’s independence struggle.

“We were driven from our traditional homes by armed police officers as if we had committed a serious crime,” he said. “This reminds me of what used to happen during the colonial era when people were bitten by dogs while fighting for this country. This is the same treatment we are experiencing now and it make me wonder what country we are living in.”

When the dam project was first announced, the government told villagers they would have access to hydroelectric power, irrigation waters and freshwater fish.

The government promised the villagers compensation packages of between‭ ‬$ 2,000.00‭ ‬and‭ ‬$ 6,000.00‭ per household, but the displaced say they have yet to receive those funds.

Admire Mashenjere, another displaced villager, says they’ve been moved so far away from the dam they doubt they will ever benefit from it.

“This dam project is killing us rather than improving our lives,” says Mashenjere.  “How are we supposed to benefit from fishing and other projects that come with the dam if we are 150 kilometers away from it?”

A few non governmental organizations had been delivering food and clothing to the relocated villagers, but complained after officials made them route aid through local authorities.

The Tokwe Mukosi Rehabilitation and Resettlement Trust continues to mobilize resources for the villagers.

“Someone cannot stay in a tent, someone cannot go to the bush to relieve themselves for a year,” says the organization’s director, Tasara Wamambo. “It’s a miracle there hasn’t been an outbreak of cholera and all the other things. It’s a miracle that these things have not happened because people have been living in the most inhumane way you can imagine.”

Angry villagers recently chased away a delegation of cabinet ministers who were visiting the area.

Dewa Mavhinga, a senior researcher for Southern Africa with Human Rights Watch, says the villagers are now living in a type of legal limbo.

“There is a false perception that by resettlement which was coerced there has been a permanent or a durable solution to the situation. This is not the case from our findings,” he told FSRN. “The 20,000 families who have been resettled forcibly are completely dependent on aid to day as we speak. They do not access to adequate food, shelter sanitation and portable water. So this is what is currently happening.”

A number of government officials, including the recently ousted Masvingo Provincial Affairs Minister Kudakwashe Bhasikiti, have been accused of looting aid intended for the displaced villagers.

Human rights organizations are calling for inquiries into the mishandling of resources, but the government just continues to promise that soon the villagers will receive compensation for the displacements.