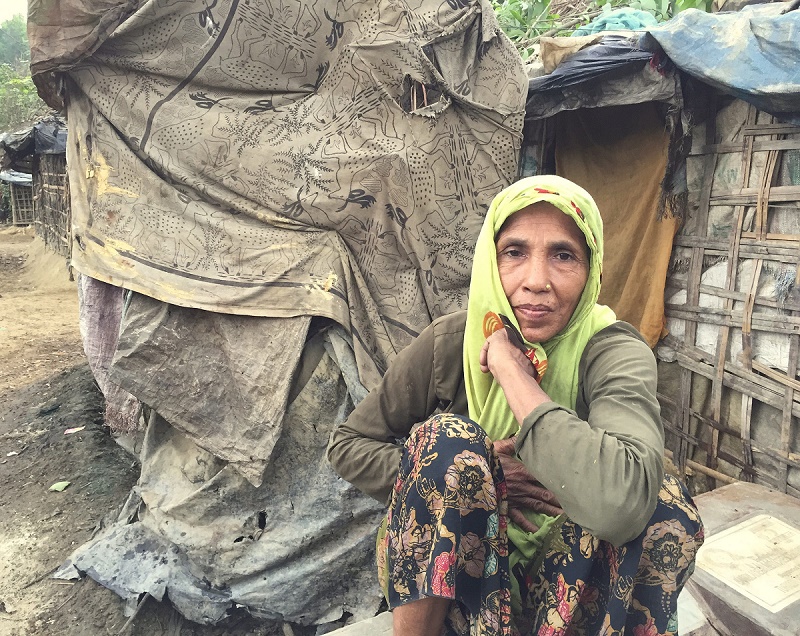 A Rohingya woman squats outside a shack in large rural shantytown that has grown outside the UNHCR-run camp at Kutupalong, Bangldesh (Photo Credit: EU/ECHO/Pierre Prakash via Flick Creative Commons)

As tens of thousands of people cross the Mediterranean Sea from north Africa to European shores, similar numbers of ethnic Muslim Rohingya from Myanmar’s Western Arakine state are also making dangerous sea voyages – theirs aimed to reach Malaysia and Indonesia. But a recent crackdown on smugglers has left thousands of people abandoned on board vessels at sea. While the EU has crafted a controversial plan to address the flow of migrants in the Mediterranean, a recent international conference in Bangkok on Rohingya migration was long on rhetoric and short on action. Ron Corben reports.

In 2015 alone some 25,000 refugees have boarded smugglers boats and left Bangladesh and Myanmar, also known as Burma. In May, Thailand’s military launched a crackdown, leading human smugglers to abandon migrants in transit. Overland smugglers left rough camps near the Thai-Malaysian border where officials later uncovered up to 170 bodies in shallow graves.  On the high seas, thousands of people were abandoned and then turned away from port in Thailand, Indonesia and Malaysia. Activists say some 6,000 refugees were left to the sea many for weeks on end. But the numbers have dropped considerably as the issue gained global attention.

As the region faced growing pressure, Thailand offered to host an international conference of 17 countries on the Rohingya’s plight.

“Irregular migration has become increasingly complex and demand comprehensive solutions,” said Thailand’s Foreign Minister Thanasak Patimaprakorn during a speech at the conference. “We must not solve one problem just to find later that it has in fact created another.”

In Myanmar, the Muslim Rohingya are stateless and not recognized as an ethnic group. Officials refer to them as Bengalis, and laws impose tight restrictions on their movement and employment. Traditionally, male Rohingya members have turned to smugglers to transport them to Malaysia and Indonesia for work so they can send money home.

Then in 2012, simmering communal tensions erupted into violence between Rohingya and Buddhists in Arakine state. Executive Director of rights organization, Fortify Rights Matthew Smith explains that false charges were made against Muslims about acts of violence, leading to spiraling bloodshed.

“This very quickly into coordinated attacks against the Rohingya population,” said Smith. “We were documenting arson attacks in some cases, horrifying pre-dawn raids – large numbers of people descending on Rohingya villages – Muslim villages burning the villages down, sending people to flee. There were killings on a significant scale.”

Nearly 150,000 Rohingya were displaced, forced into squalid holding camps. The UN’s High Commission for Refugees (UNHCR) says it still faces restrictions in aiding the Rohingya  in Arakine State where over 800,000 people lack citizenship.

UN High Commission for Refugees assistant commissioner, Volker Turk, says Myanmar must address the crisis’ root causes – especially restoring citizenship to Rohingya, withdrawn in 1982 by the then military government. “Among other things this will require the full assumption of responsibility by Myanmar to all its people, granting citizenship is the ultimate goal,” he remarked in a speech. “In the interim, a legal status for all habitual residents residing recognizing that Myanmar is their own country is urgently required.”

“Each and every sovereign state has its own challenges, some of them if not all falls within the domestic jurisdiction,” he told conference goers. “I am confident but I still have to witness that the spirit of cooperation is prevailing in this room. Finger pointing will not serve any purpose. It will take us nowhere.”

The conference, largely of senior officials and ministers, did not hear from Rohingya representatives.

But Roman Quaedvlieg, chief executive officer of Australia’s Immigration and Border Protection Portfolio, called for “a coalition of like-minded nations within the region who recognize this is a global problem and deal with a global solution.”

Chris Lewa, director of the Arakine Project, which has been monitoring the Rohingya and numbers setting out to sea, says while she welcomed the conference, it  failed to address the underlying issues. “Obviously without addressing the root causes, there will be no solution to this problem of the Rohingya people fleeing the country,” she said.

Officials say more meetings on the issue of the Rohingya are expected within the Association of South East Asian Nations (ASEAN) later this year.

Latest reports say smugglers’ brokers in Arakine state and neighboring Bangladesh have gone underground. But activists warn that without reforms in western Myanmar, people will continue to risk their lives at sea in desperation for a better life.