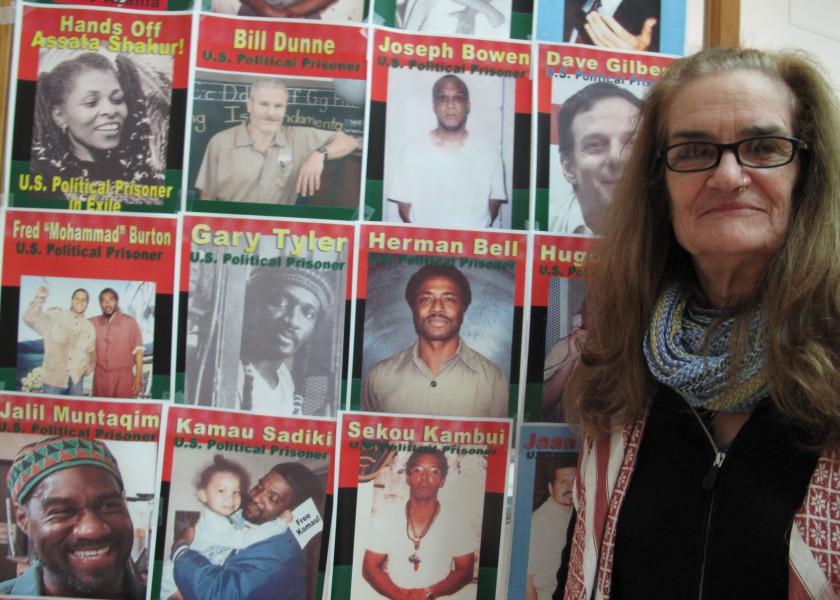 Paulette D’Auteuil is on the advisory board in of the National Jericho Movement. She recently delivered remarks to the 12th International Symposium Against Isolation in Beirut, Lebanon.

FSRN: The issue of political prisoners is something we, as Americans, hear a lot about in other countries. But your organization argues that the U.S. is no different. Is the criminal justice system targeting individuals for lawful political activities?

PD: Um, yes. It’s been targeting them since Sacco and Vanzetti and it continues to target them today. We have many political prisoners: Leonard Peltier, Jalil Muntaqim, Herman Bell… and we also have some who are engaged in struggles against the state and have seen now that COINTELPRO situation which was a program, a counter-intelligence program, by the government was considered illegal. And after 9/11 and the PATRIOT ACT everything that was considered illegal in COINTELPRO has now been incorporated and is considered a legal government means to keep people from resisting and struggling for a better society.

PD: One of the things we are trying to do is that coming to the end of the Obama administration  some of our prisoners have, or are in the process rather, are in the process of completing a set of documents for the Justice Department which will be turned over to a clemency lawyer that will be reviewed and then put on Obama’s desk.

This packet is an incredible listing of this person’s history from before they were incarcerated. If they were arrested or something happened to them in high school they have to start there and give them everything that they’ve done and then every infraction that they’ve been charged with within that.

FSRN: We’re here in Beirut hearing the testimony of former political prisoners and also their advocates. What message are you bringing to them from the U.S. and what message will you be taking back to the states?

PD: I’m going to take back this struggle that needs to be done to help build an anti-imperialist front. And that is we must take the struggles of other countries back into the United States to expose French imperialism, American imperialism and whatever and build the unity between our prisoners and their prisoners. We’ve done this with people in the Basque country, we’ve done it with Turkish prisoners, and so what I’ve brought is a group of statements from our prisoners Herman Bell, Jalil Muntaqim, Leonard Peltier, Mutulu Shakur all sent greetings of solidarity. For them this is a way for them to have their voices heard in other countries and so we have reciprocity, a revolutionary reciprocity, to support each other’s prisoners and to stand in solidarity against this capitalist class throughout the world.

FSRN: Finally, what can ordinary Americans do to support these political prisoners and what support networks exist to help people who think they or friends or family may be targeted by the criminal justice system for their lawful political activities?

PD: On our website there are all kinds of suggestions. You can just go online and Google “political prisoner organizations” and get in touch.

FSRN: Thanks for taking the time to talk to us.

Related note: FSRN has long aired the commentaries of Mumia Abu Jamal, former Black Panther and radio journalist, via Prison Radio. In October of last year, the Pennsylvania legislature passed a bill, the Revictimization Relief Act, that could subject anyone convicted of a personal crime to legal action if they speak publicly. Last week Chief Judge for the U.S. Federal District Court in Harrisburg, PA heard opening arguments in Abu-Jamal vs. Kane on 2/26/2015.  If he rules that the plaintiffs (Prison Radio & Mumia Abu-Jamal) have standing in federal court, a ruling which is expected shortly, the case will proceed on the merits of whether SB508 is a violation of the First Amendment, and an unconstitutional silencing of prisoners’ voices.