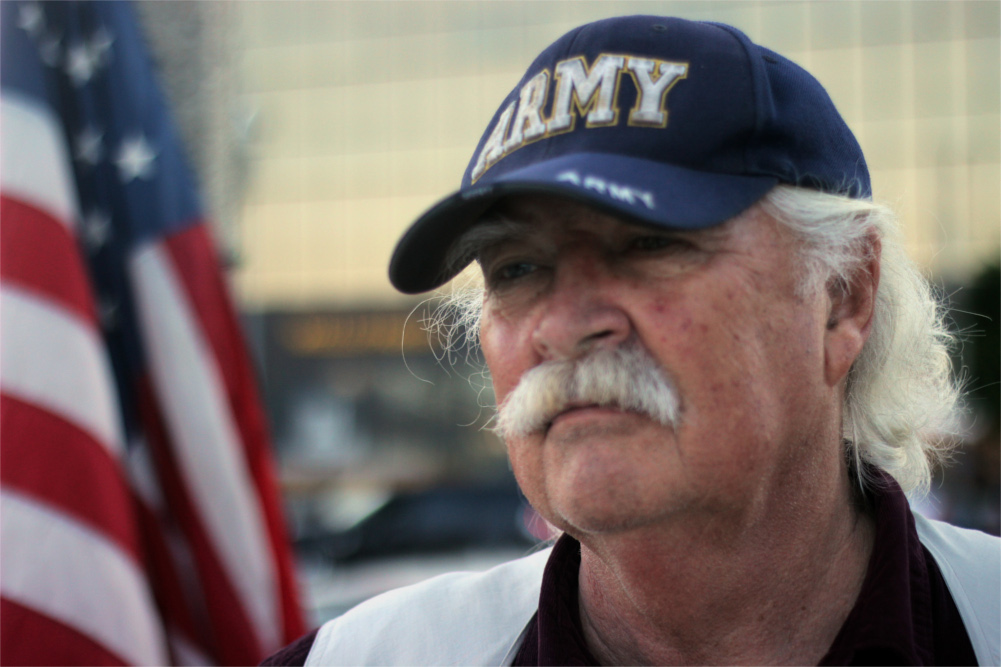 Activist and Army veteran Robert Rosebrock says a laundry, bird sanctuary and baseball field have no place on the land deeded to veterans.

The Los Angeles police shooting of a homeless man on Skid Row Sunday continues to draw fire from the movement demanding greater police accountability. This morning protesters marched from Skid Row to LAPD Headquarters and demanded accountability.
On the other side of town, a tract of land located around some of the city’s wealthiest neighborhoods has become the focus of another struggle to provide shelter to the homeless, specifically homeless veterans.

Los Angeles has the largest population of homeless veterans in the country and some of those veterans are sleeping on the streets just yards from the sprawling West LA VA campus. The VA sits on property that was donated in 1888 with the caveat that it be used to provide housing for veterans. But as FSRN’s Lena Nozizwe reports, in spite of a win in recent litigation to reclaim the land service men and women are still sleeping out in the cold.

“I’ve got cardboard that works as an in insulator to keep the moisture out,” says Army veteran Donald Bayer, explaining that his descent into living on cardboard and on the streets started in 2007 after a four-month hospitalization.

Disabled veteran Michael Aldrich says he has been on the streets much longer.

“They keep running us out of the parks. So we are quite used to it. For 20 years I have been living out in the street here,” explains Aldrich.

Both Michael and Donald are sleeping on concrete and sand under a freeway bridge in the shadow of hundreds of acres of land that was placed in a charitable trust more than 125 years ago expressly to house disabled veterans. The land, now known as the West L.A. Veterans Campus, was used for its intended purpose until the 1930s — about the same time President Herbert Hoover established the Veterans Administration. Then, in the 70s things at the West LA VA really started to change.

There is still a VA hospital on the now-nearly 400-acre parcel and the VA says a few hundred veterans do live there. But there are also empty buildings and lots of land that could be used to house many more veterans. Instead, part of the property is leased out to other entities. A laundry, a bird sanctuary and a baseball stadium have all found homes there, while as many as six thousand vets in Los Angeles remain homeless.

For the past seven years, Army veteran and activist Robert Rosebrock has led The Old Veteran’s Guard: a group of protesters at the West LA VA demanding the land be used for the purpose for which it was deeded.

“World War II they housed and cared for some of them here, but all this area around here started getting developed. You have some of the most affluent zip codes in the nation surrounding it and prior to that there was nothing here,” Rosebrock says. “So what we have got today is everybody taking over the land here that was deeded as a home for disabled soldiers and five times in the deed to be permanently maintained as a national home for disabled veterans. Well, we’re the capital for homeless veterans”

Rosebrock says he doesn’t understand why third parties remain on the property. In 2013, a federal judge ordered the leasing to stop because the occupants weren’t providing veterans with health care. And just last month, the VA settled a land misuse lawsuit, agreeing to come up with a master plan that will determine how to create temporary and permanent housing for more vets on the property.

Earlier this month during a hearing of the Veteran’s Affairs House Subcommittee on Oversight and Investigations, chair Mike Coffman echoed similar sentiments in a sharp exchange with Janet P. Murphy, the Veterans Health Administration’s Acting Deputy Under Secretary for Health, Operations and Management.

“In 1888, when this land was bequeathed to the federal government, it was for the specific purpose of serving veterans. And so I don’t understand why you have to go through some kind of bureaucratic process to determine that you are in violation of law when you are already in violation of law. Can you explain that to me?” asks Coffman.

“Well I think that, sir, in this instance a very strong and well thought out master plan will could help us answer those questions,” responds Murphy.

From their vantage point in the streets, veterans Michael Aldrich and Donald Bayer have closely followed the litigation about the property. The court ordered master plan is due in October.