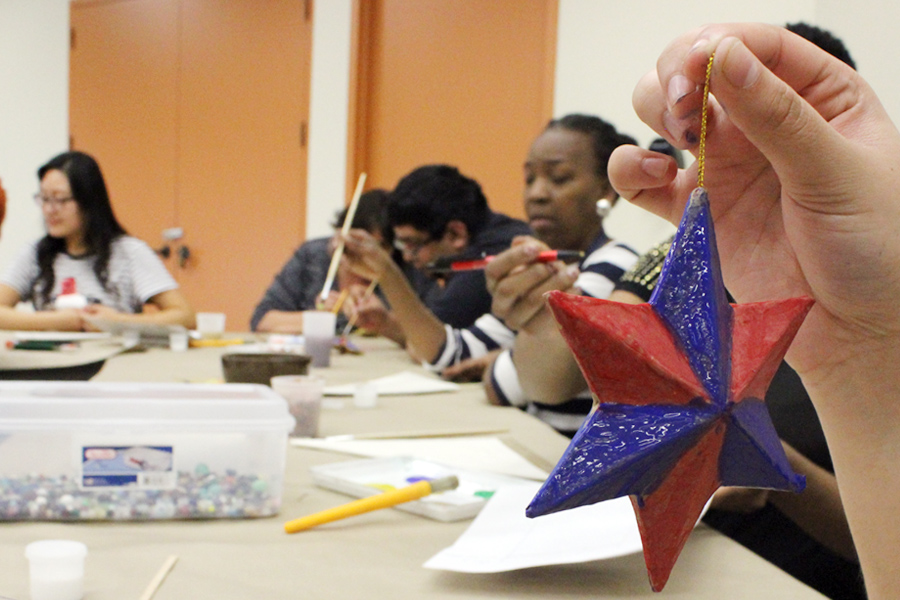 Since there was no GPS back in the 1800s, slaves used the North Star to guide them to freedom. Participants in a craft workshop at the California African-American Museum had the opportunity to learn more about the significance of the North Star as it relates to the Underground Railroad. (Photo credit: Lena Nozizwe)

This February marks the 40th anniversary of Black History Month–although the observation started 90 years ago as Negro History Week. Increasingly louder voices of both black and white Americans are asking whether the month is still relevant after all these years or if it’s a relic.

Carter Woodson, the son of slaves and a Harvard grad, is considered the father of Black History Month. Back in 1926 he described the goal of what was then a week as being to emphasize African-Americans in history, not African-American history. He said, “What we need is not a history of selected races or nations, but the history of the world void of national bias, race hate, and religious prejudice.”

FSRN’s Lena Nozizwe reports from Los Angeles where visitors to the California African-American Museum say that we are not there yet.

Kelli Carey traveled two hours to take her nephew back more than 200 years.

The registered nurse drove from Palm Springs to the California African-American Museum in Los Angeles so that 12-year-old Bryce Taylor could take part in an artistic Black history lesson.

“So he can understand where we’ve come from. He understands more about where he would like to go in the future. I want him to understand and respect other cultures as well as his own culture,” Carey explains.

Kelli and Bryce participated in a weekend museum workshop focused on the North Star and its relationship to the Underground Railroad, a secret network of escape routes and safe houses that as many as 100,000 runaway slaves took to freedom.

As for the North Star, Bryce learned about the significance of that at the museum.

Even some grownups at the museum were not clear about the association between the North Star and the Underground Railroad.

“I say North Star and Underground Railroad and you say?” FSRN asks.

“If I say North Star and underground railroad, you say?” FSRN asks another participant.

“The North Star was the brightest in the sky so that’s what slaves would follow on the Underground Railroad to get north to freedom,” explains Lynn Rossi, an artist who led a workshop in which participants could decorate their own North Stars with bling and paint. From roughly 1810 to 1850, the North Star served as a kind of GPS for slaves on the run from the South.

And the North Star figures into a multi-media exhibition by Rossi and Nichelle Evans called Evolution of the Revolution now on display at the California African-American Museum.

The subject matter ranges from the Trans-Atlantic Middle Passage, to the Underground Railroad, to the Civil Rights Movement. Rossi says both the workshop and the exhibition, which features imagery of the North Star, help fill an educational void.

“I really want this exhibition to help teach children things that might not always be in the history books. I want them to look at this exhibition and ask questions,” Rossi says. “It is almost like a big puzzle. I want them to look at each thing and understand it. Understand historical context and tie it to what is going on today now in America. I feel like it is a history lesson of the past and of the present and it relates to the future as well.”

The museum exhibition prominently celebrates the work of Harriet Tubman, a so-called conductor for the Underground Railroad. Historians say she helped guide more than 300 slaves to freedom.

Museum visitor Nicole Johnson is the mother of two children. She says most of what she has learned about black history, when she was younger, came from her family and television shows aired during Black History Month.

On this day the young mother brought her three-year-old son, Langston, to the museum so he can begin to learn about his history.

“It’s unfortunate that you have to sort of add on, but then again I guess in some ways that’s our responsibility to each other, to our families, to our children to fill in the gaps of what you don’t get in your traditional education,” Johnson points out. “It’s part of, I think it also carries what is true in African-American history about the oral storytelling tradition. So it really is part of what we should do anyway, regardless of what’s in the books. We should always augment and supplement.”

She recalls that during her own formal education the history of the Underground Railroad was reduced to a paragraph in a textbook.

College student Katie Streeter says what she learned in school was nominal as well, until she took an elective class in college.

Her inspiration for attending the North Star workshop was not as much for her as it was to share her history with the multi-ethnic sorority sisters she brought along to the event.

“Honestly, I want the girls to understand that it’s just more than just a month and although there is a lot of activity during February, it happens 12 months of the year. It’s not just February,” Streeter says. “It’s not just we are not going to just celebrate Black History Month in February and then March 1 we are going to forget about everything we have celebrated. No, it goes beyond that. That’s the point of today.”

The museum’s craft workshop, originally intended for children, was so popular that organizers had to add extra chairs and a new table to accommodate all the interested participants.  And most of them were adults who were finding their way back in time to an enhanced understanding of black history thanks to the North Star.