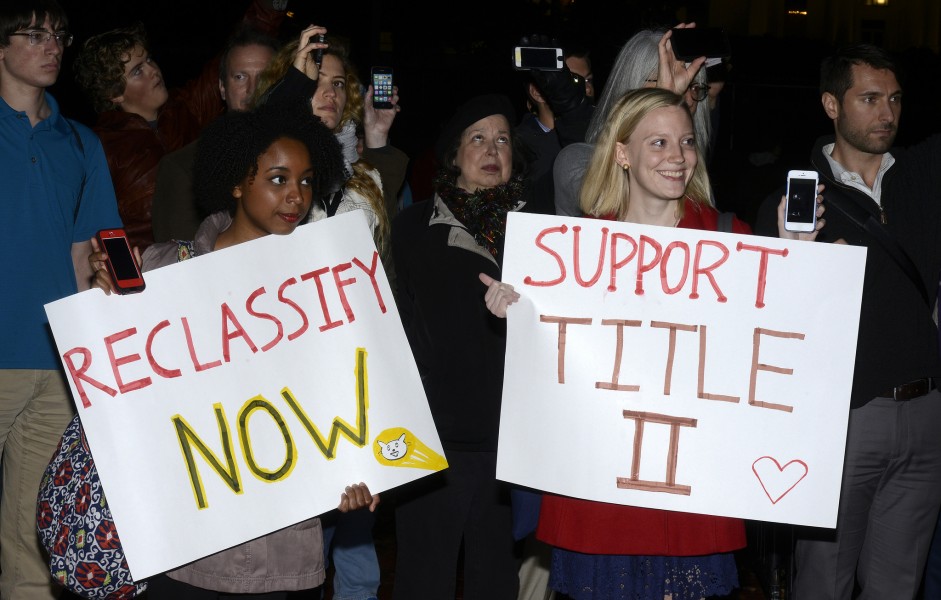 Rally in favor of net neutrality outside of the White House on November 6, 2014. (Photo credit: Stephen Melkisethian via Flickr / Creative Commons)

Today the Federal Communications Commission, or F­C­C, passed two important measures for equal internet access in a party ­line 3­-2 vote. The first overrules state limits placed on Wilson, North Carolina, and Chattanooga, Tennessee blocking the cities from building out their own internet infrastructure. The move is likely to set a precedent in 19 states with similar restrictions on the books. The commission also voted in favor of classifying the internet as a public utility. It’s a development that marks an important win for net neutrality advocates. Anthony J Rivera has more from Washington, D.C.

Net neutrality activists are hailing the FCC decision today to add unprecedented protections to the Internet. It categorizes the internet as a public utility. This assures providers like Verizon, Comcast and A­T­&­T cannot throttle internet content or otherwise tamper with the indiscriminate access to broadband service. The plan also addresses mobile access to the web.

At today’s hearing, FCC Commissioner Mignon Clyburn cheered the impending vote, saying that for scores of Americans, “the choice of one, let alone multiple, broadband networks is a dream deferred and the promise of universal access remains unkept. Today’s vote seeks to draw a line in the sand once and for all by removing barriers to deployment and fostering competition consistent with the FCC’s core mission and values.”

Last November, President Obama gave his blessing to stricter rules for the web by the FC­C after nearly four million comments were made to the agency. The call sent conservatives howling and they’ve accused the White House of meddling. In recent weeks, Republicans on Capitol Hill have slammed President Obama and the F­C­C Chairman.

During today’s hearing, Senate Majority Leader Mitch McConnnell tweeted that the proposal was a blow to innovation in our country.

Heads of the powerful House Oversight and House Energy and Commerce Committees have called for hearings to discuss the effects of the commission’s regulation. Full committee Chairman Chaffetz has also asked for documents and correspondence between the Obama administration and the commission. The F­C­C is cooperating but not fast enough to preempt today’s vote.

Net neutrality advocates are, for now, enjoying a victory against big corporate interests who they say want to gouge consumers. But it’s a victory that could feel more like a deadlock as the fight may now head for the courts.