Transparency activists want to shine a light on ‘dark money’ 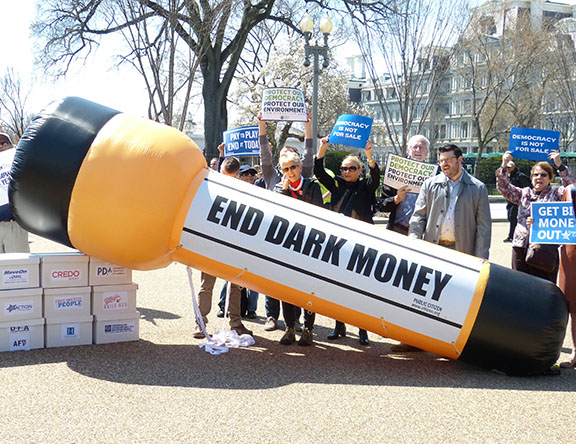 Protesters took to the White House Thursday to demand greater accountability in campaign financing in this era of Citizens United — the Supreme Court case that provided the legal pathway for unlimited campaign contributions by corporations. Their demands? That President Obama sign an executive order forcing federal contractors to reveal their campaigns contributions. The rally marked the one year anniversary of McCutcheon vs the Federal Election Commission which blew the cap off individual spending towards a campaign or political party. Anthony J. Rivera has the story from the White House.

Hundreds of tourists looked on Thursday afternoon as a coalition of demonstrators from the NAACP, Public Citizen, the American Postal Worker’s Union and others rallied around a giant prop flashlight. What they’re protesting is not just unlimited or so-called “dark money” contributions to political campaigns but also the revolving door in government that they say only exacerbates corruption.

Diallo Brooks is the director of outreach and partner engagement for People For the American Way, a social justice organization.

“Well this is a small piece of the puzzle and it fits in because having the president issue an executive order to really shine some light on the government contractors that get paid a lot of money by the American people to provide services to the country can turn around and spend the money that they’ve made from the government to actually lobby the government and actually push for legislation and other issues that impact their bottom line in ways that we don’t know about,” Brooks said.

Recent reports by the Sunlight Foundation, a non-profit organization focusing on government transparency, help untangle a web of conflicted interests in Congress.

This tendency to leave office to go into lobbying on behalf of interests of corporate campaign contributors — and sometimes even go back into the public sector — is what known as Washington’s revolving door.

According to data compiled by New York University’s Brennan Center for Justice, $460 billion of taxpayer money went to private contracts in industries like defense, health care or criminal justice in two thousand thirteen. Forty percent of that went to just 25 companies. And in 2014, they gave more than $30 million of reported money to campaigns through their political action committees, or PACs.

Since the year 2000, the top ten federal contractors have received $1.5 trillion from the federal government. That’s in the neighborhood of how much NASA estimates a full space mission to Mars might cost.

Put that money in the context of political spending, which has sharply increased over the last few cycles, and the case for transparency becomes pretty compelling.

President Obama spoke about the corrosive effects “dark money” in his State of the Union speech in January, remarking that a “better politics is one where we spend less time drowning in dark money for ads that pull us into the gutter and spend more time lifting young people up with a sense of purpose and possibility — asking them to join in the great mission of building America.”

There were plenty of young people in front of the White House Thursday with their own mission: to hold President Obama to the principles outlined in that speech.

But these days, many on Capitol Hill are in no mood to talk about presidential executive orders. With a Congress ruled by Republicans, last month’s drawn-out fight over the president’s immigration action and rhetoric suggesting he habitually oversteps his constitutional authority, any demand for addition executive orders risks being dead on arrival.

Michele Jawando is the vice-president of legal progress at the Center for American Progress. She dismisses the hits on the president’s executive power, saying “there’s long standing precedent and understanding of executive order and the power of the president. And we shouldn’t — just because something is hard all of the sudden say the president should stop doing that. So yes, political winds will blow in a lot of different directions whether it’s talking about immigration or [the] environment. But what when you think about is the most important role of the presidency? It’s to move forward an agenda that he believes in.”

Congress has resisted attempts on executive action before on this issue. In 2011, a draft order requiring contribution disclosures for contracts circulated in Congress. It even sparked a joint hearing in the U.S. House where California Republican Darrell Issa called the policy a “compliance burden” on small businesses. He also slammed the administration’s proposal for not including disclosure requirements for “grantees” like trade unions.

Opponents of this action say injecting politics into the procurement process would be counter productive and the public already has access to this information. Jawando says the access to that information isn’t so simple and that “we often — and sometimes we don’t find out at all — about what money they spent until after the election.”

It’s unclear whether the president will sign an order forcing disclosure by these federal contractors before the two thousand sixteen election cycle heats up. But activists are hoping he will be empowered by the fact that he doesn’t have to run for president again. Still, even if an executive order is signed, Republicans in Congress have shown they will try to use the power of the purse to trip up any actions by the president they don’t like.