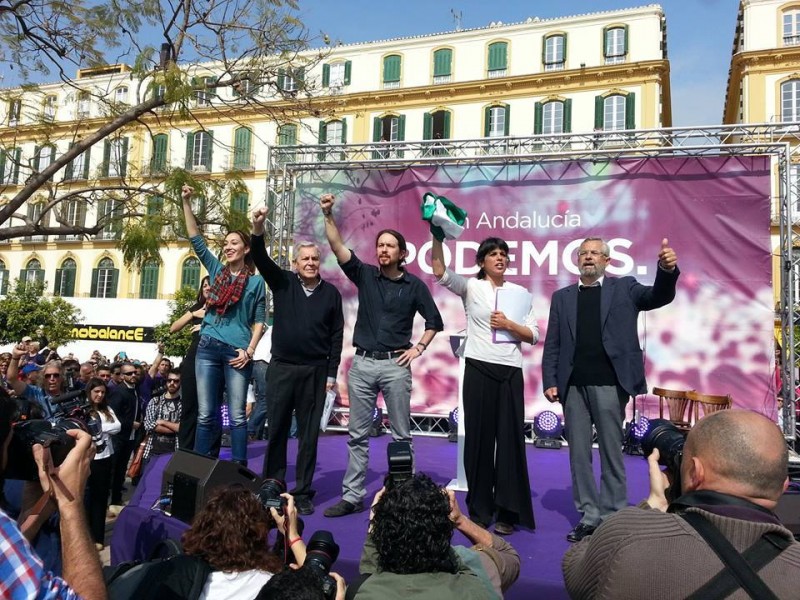 In just a year, Spain’s anti-austerity Podemos party has grown from nothing to become the most popular party in opinion polls. Its rapid rise – and the recent victory of an anti-austerity party in Greece – has the political establishment worried ahead of national elections later in the year. In the last few weeks, the party has come under increased scrutiny with critics testing its ‘populist’ rhetoric. And this weekend, Podemos faces its first domestic electoral test during a regional vote in the province of Andalucia. Nik Martin reports.

Podemos leader Pablo Iglesias rallies supporters in the southern city of Malaga. His party will soon face the first of several regional elections here in Spain’s most populous province.

Stretching from the border with Portugal to the tip of the southeastern coast, Andalucia has been been a stronghold of the Socialist PSOE party since the end of the dictatorship of Francisco Franco in the mid-1970s.

When the 2008 financial crisis hit Spain, a massive protest movement saw hundreds of thousands of people take to the streets, campaigning against public sector cuts and job losses.

Podemos emerged out of the leaderless ‘Indignados’ movement, seizing on the anger felt by ordinary Spaniards.

“They occupy an emotional space that couldn’t possibly be filled by any other party in the center-left in Spain,” says University of Malaga political scientist Manuel Arias Maldonado. “The Communist party must be very bitter now because their program is very similar to Podemos. I mean they have been supporting this discourse for years, but they have never succeeded electorally.  But they couldn’t perform this cathartic function because their brand was tarnished. They sat on the boards of the banks that went bust, along with other political parties and the unions, so they cannot represent the new.”

Andalucia has the highest unemployment rate in the whole of the European Union. It’s also a rural, farming zone. And while Podemos’ Social Media campaigns have mobilized young and urban fans, they have yet to resonate with many traditional voters.

“It is true that Andalucia is a difficult place because of the traditional support for the Socialists and also the ruling Popular party or PP, which is also strong,” says Manuel Lopez, who sits on the party’s citizens’ council in the city of Malaga. “But polls suggest that our popularity is still growing and that nothing is decided yet.”

But critics think Podemos’ strategy of a cooperative democracy is too simplistic. “They are saying the situation will be solved via some sort of magical trick, via more participation, although they don’t explain how that will be implemented via the rewriting of the constitution,” critiques Professor Maldonado. “And in that way, they’re just refraining from a deeper debate about how to solve our problems and its working.”

The new party, however, has been able to harness a certain sense of optimism that they can deliver. It’s raised around half a million dollars for the regional campaign, and spent much of it on television advertising.

Podemos has been polling almost 20 percent in Andalucia, not as high as nationally but enough to become the second or third largest party in the regional parliament. But some polls suggest the party may have peaked. It now faces a challenge from another anti-establishment group, Ciudadanos, a center-right party which some say has clearer policies for change.

In the small town of Almunecar, resident Marie Carmen Garcia says she’s still undecided about about who to pick. “I think Ciudadanos is more respectable than Podemos,” she told FSRN. “Podemos maybe says things that people want to hear. But they don’t really explain what they will do. Most of the people we don’t trust any more our politicians, me for example. Older people are a little bit scared of changing but I think it’s time to change. I know who will not get my vote.”

In recent weeks, much of the Spanish media has turned on the young upstarts, printing allegations about leaders’ tax affairs and speculations that the party is receiving money from the government of Venezuela.

But spokesperson Manuel Lopez vows that, if elected, Podemos will clean up Spanish politics. “We are going to raise transparency to levels currently unthinkable,” he said. “We’re going to endow the media so that corruption can truly be fought and so that there is real accountability of how public money is spent. But more than that, we want the public to be able to follow – in real time – where the money is being spent.”

But as the country heads towards the national vote in December, the knives are out for Podemos. These regional elections should indicate just how the new party will perform, and if it has enough momentum to put a sizable dent in the country’s political establishment.