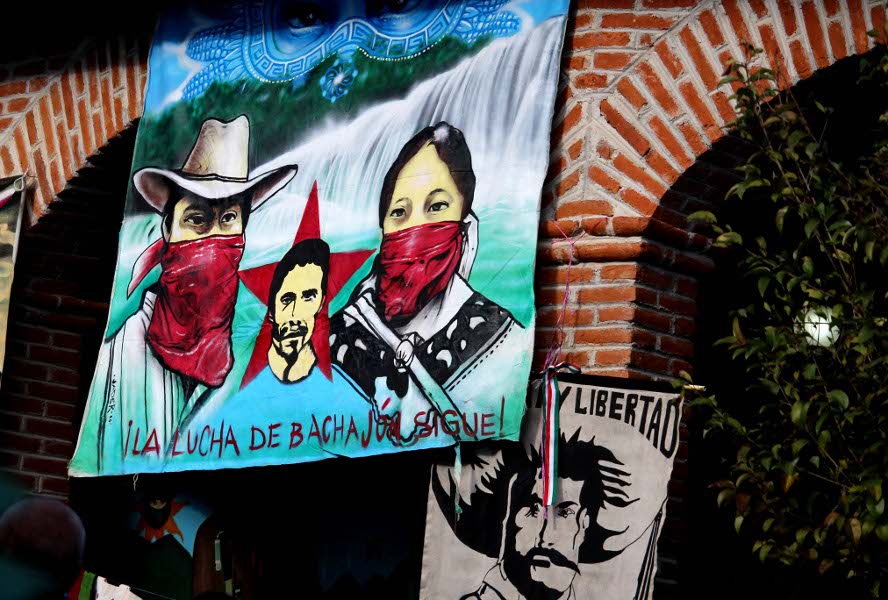 A painted banner portrays three Zapatista civilians killed by paramilitaries. It reads "The Struggle in Bachajon Continues!" The banner was hung in CIDECI, an autonomous university for indigenous and rural peoples in San Cristóbal de las Casas, Chiapas. The closing events for the Global Festival of Resistance and Rebellion Against Capitalism were held at CIDECI with the participation of the families of the 43 disappeared students from Ayotzinapa and the National Indigenous Congress (CNI).

Members of an indigenous community located in the path of a major development project in Chiapas, Mexico say hundreds of police and armed civilians attacked and burned down communal buildings at the heart of a land dispute  in area where the government wants to develop an ecotourism resort. Tim Russo reports from San Cristóbal de las Casas.

An ongoing struggle over land in one of the most biodiverse regions of Mexico reached a new boiling point over the weekend when state police and armed civilians attacked a community of Zapatista sympathizers in San Sebastian Bachajón.

A spokesman for the Tzeltal indigenous landowners in San Sebastian Bachajón – who asked for anonymity for security reasons – says the attack began at around 8 a.m. on Saturday March 21st when approximately 600 state police and machete-wielding area residents shut down access points to the pro-Zapatista enclave. He says police fired tear gas as attackers forced their way into buildings and later set them on fire.

Hours after the initial attack, an armed mob detained a group of independent journalists as they attempted to document the aftermath. Two reporters were promptly manhandled, held with machetes to their throats and bodies and stripped of their smart phones and high-end digital cameras.

The eyewitness said a local political figure led the attack along with residents of a communal landholding known as an “ejido” in order to retain total economic control of the famed Agua Azul waterfalls on their jointly-owned lands.

The waterfalls are the centerpiece of a planned resort and theme park that has been on hold since 2007, largely due to opposition from pro-Zapatista communal landowners. The proposed resort in San Sebastian Bachajón is part of a larger tourism megaproject known as the Ruta Maya – or Mayan Route.

The proposed project – and its promised benefits – has created a rift within the San Sebastian Bachajon community. The faction in favor, led by the de-facto mayor, has received support from state institutions while opponents have been under pressure to give up their fight under threat of displacement and violence.

Since the project’s introduction in 2007, more than  160 local opponents have been arrested and two opposition leaders have been killed.

The latest attack came on the anniversary of the murder of local organizer Juan Carlos Gómez Silvano and just days after the Zapatista National Liberation Army announced an international seminar called Critically Thinking in the Face of the Capitalist Hydra, to be held in Zapatista territory and San Cristóbal de las Casas, Chiapas from May 3rd through the 9th.