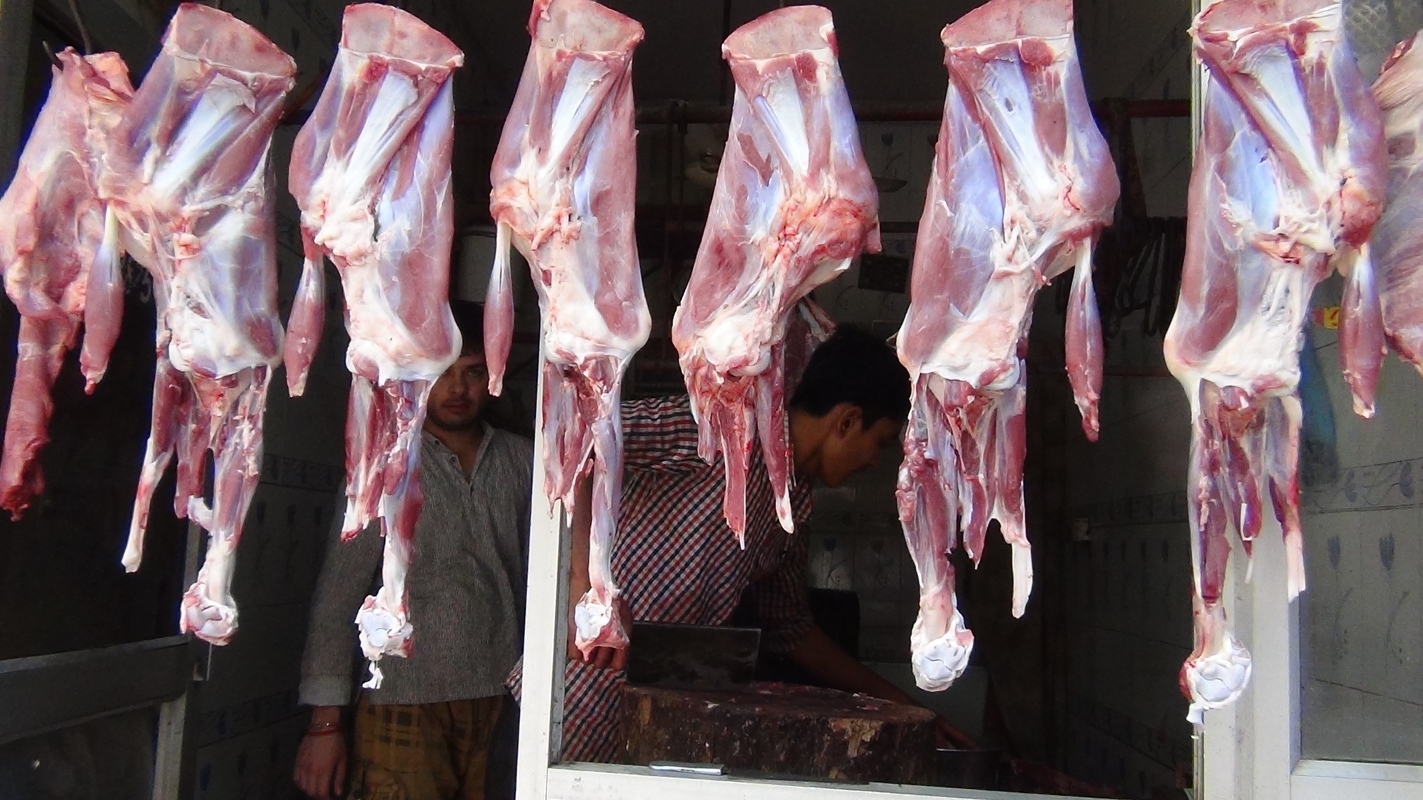 In yet another controversy, India’s ruling Hindu nationalist party the BJP has introduced a ban on the sale and possession of beef. Currently in effect in two states under its rule, the party plans to extend the ban to the entire country. Cow is sacred for many Hindus and during the recent campaign, the BJP promised to completely ban the slaughter of cows. The party won a landslide victory in last year’s general elections and has since enacted several controversial laws. The ban on beef will affect hundreds of thousands of people who depend on the cattle industry for both food and livelihood. Bismillah Geelani reports the move is evoking protests from various groups.

Thirty five-year old Praveen Kumar worked as a deliveryman at a slaughter house in Mumbai. His job involved transporting meat from the slaughter house to retail shops. But he lost his job five weeks ago when the slaughterhouse shut down following the state’s ban on beef.

“I shifted to this work just a few years ago because my earlier job as a porter at a railway station was tougher and the income wasn’t enough to meet my needs. Here I was earning about $7 a day and life had become much easier. I was able to keep my wife and three children happy,” Kumar explains. But with this ban, now I can’t even afford two proper meals for my family and my children may have to leave school because I can’t pay the fees.”

The Hindu nationalist party BJP, which came to power in the Western state of Maharshtra earlier this year, has introduced a new law banning the slaughter of bulls and castrated male cattle, or bullocks.

Cow slaughter is already prohibited in most Indian states, including Maharashtra.

Selling or consuming beef is now a crime punishable by five-years in jail and a fine of more than $150.

Eknath Khadse, a minister in Maharashtra government says expanding the ban was necessary. “When we think of cow, we naturally think of bulls and bullocks because it’s the same family and the entire family needs to be protected. It’s a matter of faith. After all, we live in India and for most of us the cow is sacred.”

Many Hindus consider the cow a holy animal and worship it accordingly, hence the longtime ban on killing female cattle across much of India. Expanding the ban to cover bulls and bullocks — the major sources of beef in the country — will hit the country’s growing meat industry hard.

Though the law still allows the slaughter of buffaloes, suppliers in Mumbai say that is just a small fraction of their business and have gone on strike, protesting the government’s decision.

“At just one of our facilities, 450 cattle are slaughtered every day and hardly 50 of them are buffalos. The rest, about 80 percent, are bulls and this is just the local consumption,” says Qurfeshi. “If we don’t stop work we will be in bigger trouble because there will be a shortage of buffalo and their price would double or triple, and when the butcher gets them at a such a high price he will sell at a higher rate and will be left to bear the brunt of consumers’ anger.”

Maharashtra isn’t the only state to ban killing cattle. The BJP-ruled northern state of Haryana quickly followed suit and went a step further– introducing an even harsher punishment of a 10-year jail term for violations of the law.

And according to Home Minister Rajnath Singh, the central government is now planning to introduce the ban throughout the country.

Many accuse the Hindu nationalist party of imposing a Hindu agenda on a secular and multicultural society.

A group of students, artists and intellectuals is protesting the ban by organizing beef eating festivals across India. Poet and Playwright Girish Karnard is part of the group.

“I eat pork. It will offend some Muslim friends of mine. Does that mean it will be banned? How ridiculous,” quips Karnard. “I’m not asking them to eat. Their religion forbids them to eat so let them not. It’s a cultural aggression by a caste or a group who think they are powerful and want to retain their power by doing these kinds of things.”

India is the world’s second largest beef exporter and also the second largest producer of leather foot wear and garments. Hundreds of thousands of people earn a living from these industries and face a bleak future following the ban.

Even farmers, who the government says would be the biggest beneficiaries of the ban, are strongly opposed.

Raghunath Patil is a farmer leader. He says the ban poses a threat to farming itself as the majority of Indian farmers still use bulls to pull their plows, but they won’t be able to continue doing that.

“After a point when the cattle can no longer perform, they become a huge liability for us and we need to dispose of them and replace them with more productive ones,” Patil explains.

The voices of dissent are beginning to emerge even from within the BJP. The government in the Western state of Goa, led by the BJP, says should a nationwide ban be imposed it won’t implement it, arguing that beef is a staple food for more than a third of the state’s population.