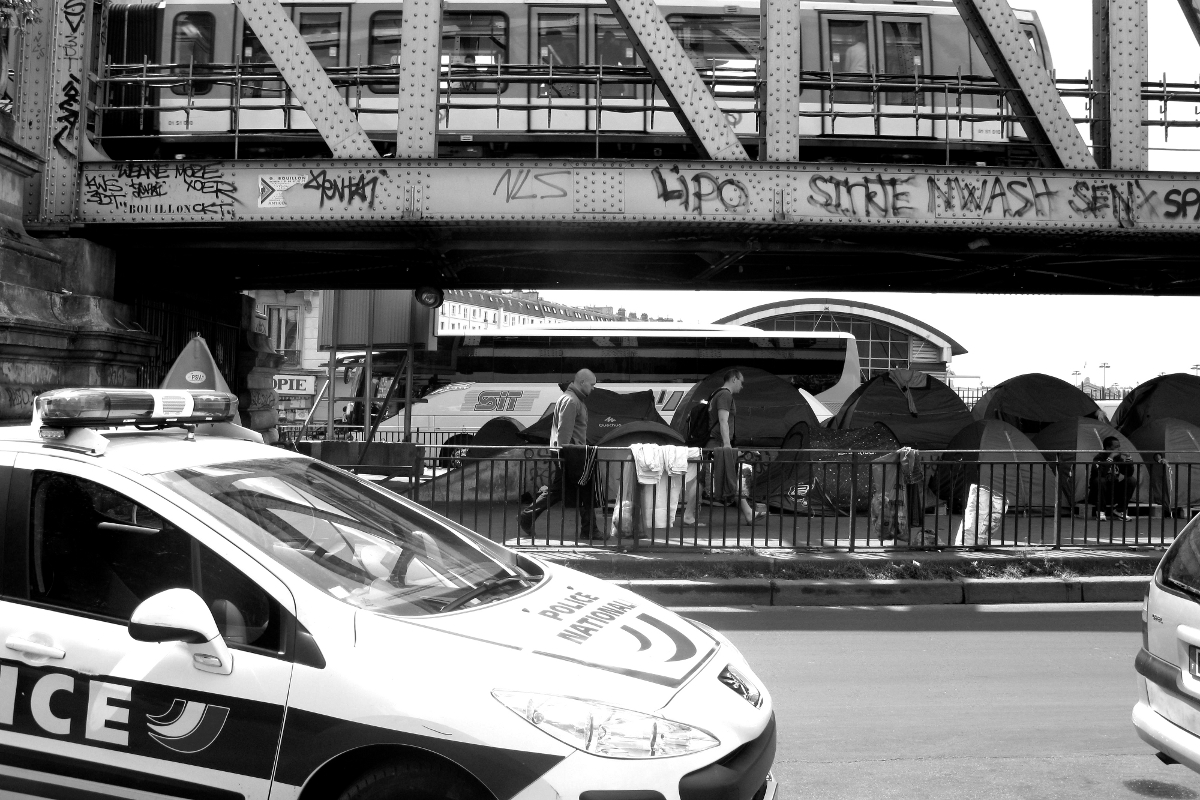 The European Union asked member states Wednesday to take in about 40,000 asylum seekers from Syria and Eritrea over a period of two years. The plan, known as the European Agenda on Migration, aims to more equally distribute the tens of thousands of people making the dangerous Mediterranean Sea crossing, seeking refuge. Many European countries oppose the EU plan, including France. Makeshift refugee camps have popped across the country in recent months, including one in central Paris that keeps growing despite a total absence of humanitarian assistance. French authorities said today they will soon dismantle the camp, citing public health concerns. From Paris, Raphaël Krafft reports.

They call it Koubri, “the bridge” in Arabic. The campground here consists of some 200 tents and is sheltered by an elevated metro line with trains passing overhead each minute. Beneath the bridge lie railway tracks running in and of Paris’ Gare du Nord station, where departing trains are bound for England, Belgium, Holland or Germany — dream destinations of some of the 300 to 400 migrants living here.

“Here, you will find  Sudanese, Libyans, Mauritanians, Algerians, Moroccans, Tunisians, Chadians, Eritreans, Ethiopians,” says Zacharia, a 29-year-old Moroccan who has been here for two months. “But there are a lot of fights here. We fight for nothing. Fights. Fights. And fights again. With all due respect, we’re like wild animals here. Look at the garbage all around. It’s not a life. It’s a crappy life.”

It’s not even a camp, it is a “sub-camp” says Pierre Henry, general manager of French NGO France Terre d’asile.

“Because, at least, when the UN High Commissioner for Refugees intervenes in a developing country, they have to follow standards setting up a camp for refugees,” Henry says, explaining the deplorable conditions at Koubri. “In this case, the people living here are not provided with basic commodities, no access to sanitary facilities, no access to food, no medical assistance. Some of these people have been living in these conditions for six months.”

It’s impossible to determine exactly how many people are living here or where they came from. Its equally impossible to know how many have asked for asylum in France, or are in transit to northern Europe. Nearly all are men; the few women and children here stay largely hidden.

What is certain is that most crossed the Mediterranean Sea on makeshift boats from Libya to Italy, Malta or Greece. According to the International Organization for Migration, more than 1700 people have died at sea this year alone, among nearly 40,000 who have tried the perilous journey in the past five months.  Most here come from East Africa, fleeing the endless conflicts shaking Sudan, Ethiopia, Somalia and Eritrea for decades. Mohammed Ahmad Mohammad from the city of Damazin in Sudan is one of them.

Click on any map point for more information about Mohammed’s journey.

Mohammed says he boarded a boat “in Zuwara, at the border between Libya and Tunisia. When we arrived to the beach in Italy, they took us in a plane to Milano [Milan]. After that, I left Milano to France.”

26-year-old Samir has lived in the camp for one month. He fled Eritrea six years ago, after deserting the army he was forced to join as a child-soldier at age 13. After months originally spent in Italy, Samir made his way to Norway, but was eventually expelled and sent back under what’s known as the Dublin Regulation, which establishes a Europe-wide fingerprinting database for unauthorized entrants to the EU. The Dublin Regulation aims to “rapidly determine the Member State responsible for an asylum claim,” and provides for the transfer of an asylum seeker to that Member State. Samir did not want to stay in Italy and came to France.

When asked if he wants to stay here, Samir replies: “Yeah, of course, forever! After I have job and made a home, I want to make one nice family. I don’t need too much money. I [just] want a [working] contract, a guarantee for life.”

Most media and politicians describe these migrants as “in transit” while in Paris, on their way to England or Northern Europe. But a significant number of them, like Mohammed, have requested asylum in France;  or like Samir, want to stay.  Pierre Henry of France Terre d’Asile says about  half of the refugees currently in the  Koubri camp have either already asked for asylum or are on the way to do it.

“The narrative on the “state of transit” is convenient speech,” according to Henry. “Of course, there are people who don’t want ask for asylum in France. There are also many people who are not encouraged to ask for asylum in France given the conditions in which they are forced to live and  the length of the asylum procedure. They may consider continuing  their journey…especially after spending four months under a metro bridge, that attitude can be understood. Besides, I wonder to what extent maltreatment could be used as a dissuasive tool by some misguided minds.”

Under international law, refugees who officially request asylum qualify for accommodations at a local hotel. But Mohammed says that’s not happening: “Yes, I asked four months ago. But they did not give it to me. Not only me, a lot of people. But the [NGOs] say there are too many people.”

According to OFPRA (the French office for refugees and stateless persons) and its 2014 statistics, there’s little chance that Mohammad’s asylum request will be granted. For Sudanese petitioners, only about one out of four requests are approved.

After several months of inaction, the Paris City Council recently voted to dismantle Koubri, and Paris police issued a statement Thursday saying they will move forward to take the camp down in the next few days. There’s no word yet if officials will provide alternative housing options for the hundreds of people currently living here.