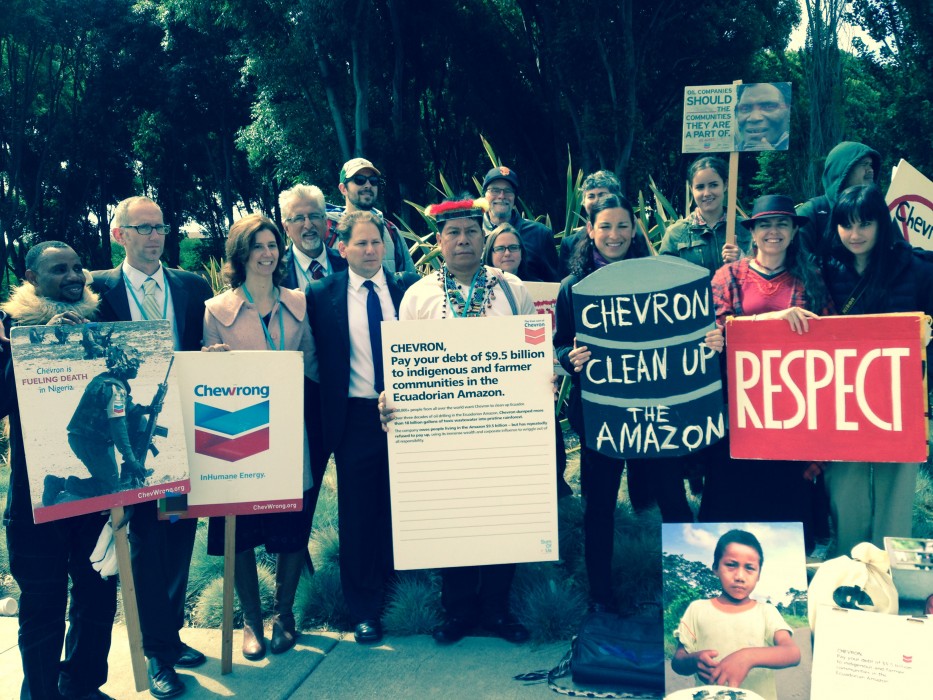 About 100 people including members of environmental and human rights’ groups and representatives from frontline communities in Ecuador, Nigeria, and the San Francisco Bay Area demonstrated Wednesday in front of Chevron’s annual shareholders meeting at its world headquarters in San Ramon, California. The group held signs saying, “Corporations are not people; money is not speech,” and “Chevron, pay your 9.5 billion” in reference to a court-ordered settlement for pollution in Ecuador that was later challenged by Chevron. A few members of the group went inside the shareholder to present resolutions to the shareholders and to ask questions of Chevron’s Chairman and CEO, John Watson during the question and answer period. Carla West spoke with some of the demonstrators outside for the meeting and files this edition of Street Beat.

Suanu Bere, Ogoniland, Rivers State, Nigeria: “I’m from Nigeria, Rivers State, Ogoniland where Ken Saro-Wiwa is from, and in Ogoniland the area has been polluted by Shell and Chevron in Niger Delta, and we have been going through a lot of suffering, sickness, and lack of amenities over there. We don’t have food because the land has been devastated, and there is a lot of war going on there because of the oil, and people who are there are suffering, and they don’t enjoy anything out of it. I want Chevron to go make a development over there and do some clean-up, and let’s provide the amenities and facilities for the people and employ people for work.”

Erin Gray, Marketing and Strategic Analysis, Green Century Capital Management: “I work on marketing and strategic analysis at Green Century Capital Management which is the first family of fossil free mutual funds in the country. So Green Century filed a shareholder resolution that calls on Chevron to stop spending shareholder money to influence election outcomes, and we believe that Chevron’s spending on elections doesn’t serve its shareholders or the communities in which it operates and that the best course of action is for the company to refrain entirely from making political contributions.”

Humberto Piaguaje, indigenous Secoya, Ecuadorian Amazon; Coordinator, Union of Peoples Affected by Chevron: “I’m an indigenous Secoya from the Ecuadorian Amazon, and I’m the Coordinator of the Union of Peoples Affected by Chevron which represents 30,000 people. Oil drilling practices, the dumping of formation waters, and leav toxic waste in unlined pits have all contaminated the environment and led to many sicknesses such as cancer and leukemia. So we want three things. We want environmental reparations. We want the area that was damaged to be cleaned up, and it is Chevron’s responsibility to do that. We also want our health issues addressed. We need support with the impacts on our health. And we also want access to clean water because the reason we’re getting sick is because we don’t have access to it.”