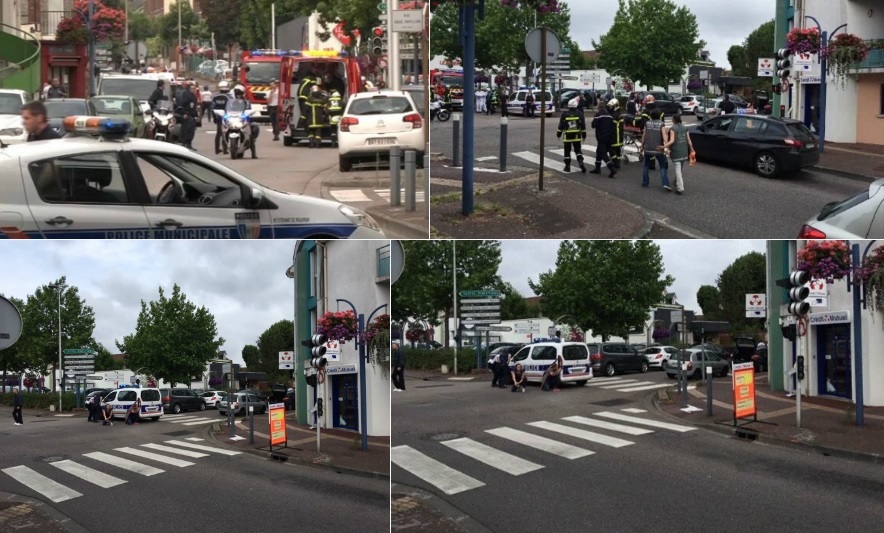 French police respond to the scene of the attack at a churhc in St. Etienne du Rouvray. (Screenshots via Twitter)

France is again reeling from a deadly attack claimed by the self-styled Islamic State. The target this time was a provincial Catholic church. FSRN’s Khaled Sid Mohand reports.

France woke up to another apparently senseless murder on Tuesday. This time the scene was a church in the small city of St. Etienne du Rouvray, where at least one person was killed.

Witnesses told French TV that two men burst in the church and held five people, including a priest and two nuns, hostage. They then slit the throat of the church’s 86-year-old priest, Jacques Hamel, all the while videoing themselves speaking in Arabic as they terrorized the morning mass.

Police shot the two men dead as they exited the church. And an unidentified parishioner is fighting for his life in the hospital.

French authorities have not named either attacker. One of the men reportedly tried to travel to Syria in 2015 but had been detained by Turkish border guards and returned to France. The other was shot in the face and authorities say they’ve had trouble identifying him.

“What these terrorists want to do is to divide us, and today after the death of this priest I am thinking of all the Catholics of France and expressing my support,” Hollande said. “It’s not only Catholics who are involved, all the French people are involved, and that’s why we must ensure cohesion. Nobody should be able to break it.”

Minutes after President Hollande spoke, the self-styled Islamic State released a statement claiming it was its soldiers that had carried out the attack.

This is just the latest in more than a week of bloodshed claimed by ISIS. Earlier this week a suicide bomber blew himself up in a southern German town injuring a dozen people. And it was less than two weeks since 84 people were killed after a truck rammed a holiday crowd in the city of Nice.

The ISIS-inspired attacks in Europe follow waves of even deadlier attacks in Turkey, Iraq and Afghanistan. Meanwhile, U.S. and its allies continue an aerial campaign over ISIS-held territory in Syria and Iraq. U.S. military commanders boast of strategic gains against the group, but there are also there are reports of civilian casualties. Last week near the Syrian city Manbij opposition groups said more than 100 civilians were killed by U.S.-led airstrikes.

So the the cycle of killings continue with daily bombardments in Syria and Iraq and ISIS calling on its followers to commit revenge attacks across the world.