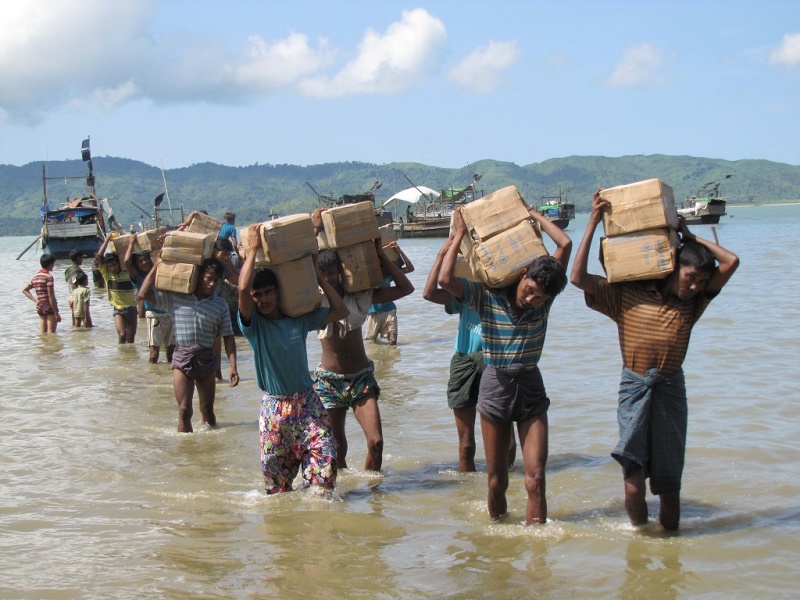 Many internally displaced Rohingyas in Myanmar live in camps like this one near Sittwe, only accessible by sea with boats transporting vital aid supplies like rice and cooking oil. (Photo Credit: Mathias Eick, EU/ECHO, Rakhine State, Myanmar/Burma, September 2013)

Thousands of Rohingya Muslims and Bangladeshis are stranded at sea as a result of a new policy in Thailand, Malaysia and Indonesia to refuse port —  or “push back” —  boats filled with migrants and asylum-seekers. The Southeast Asian countries argue the policy is a way to fight human smuggling, but human rights groups say it jeopardizes the lives of already desperate refugees. Ron Corben reports from Bangkok.

Hundreds of migrants aboard a vessel floating in Thai waters pleaded for assistance Thursday after smugglers abandoned the boat and left it drifting in open seas. Thai navy helicopters dropped food packages nearby but otherwise refused assistance. Most aboard are stateless Rohingya from Myanmar. Days ago, Malaysian authorities refused to allow the boat to land, and by Thursday had refused port to another two vessels overcrowded with with hundreds of Rohingya refugees.

The migrants are among thousands of people stranded on vessels in regional waters amid a crackdown by neighboring states against human smuggling operations.

“Between 7 and 8,000 are stuck at sea,” says Chris Lewa, coordinator with the Arakan Project — a non-government group monitoring Rohingya refugee movements. “They are trapped on their boats. The boats serve now as the ‘camp’  but in international waters.” Lewa says many have been at sea for months rather than the two to three weeks that the journey would normally take.

Earlier this month, Thai officials uncovered dozens of bodies of refugees buried in shallow graves in jungle camps along southern Thailand’s border with Malaysia. Thailand has since arrested dozens of local police and security forces suspected of links to the smuggling operations.

The United Nations High Commission for Refugees says some 25,000 people have left Bangladesh and Myanmar for South East Asia since October last year. Human Rights Watch called on Thailand, Malaysia and Indonesia, to end the push-backs of boats, accusing Myanmar of instigating the crisis with a policy of persecution against the Rohingya.

Thailand has agreed to host a regional meeting on May 29 in a bid to find a regional solution.