S. African Jews apologize to Palestinians displaced from their village by the Nakba 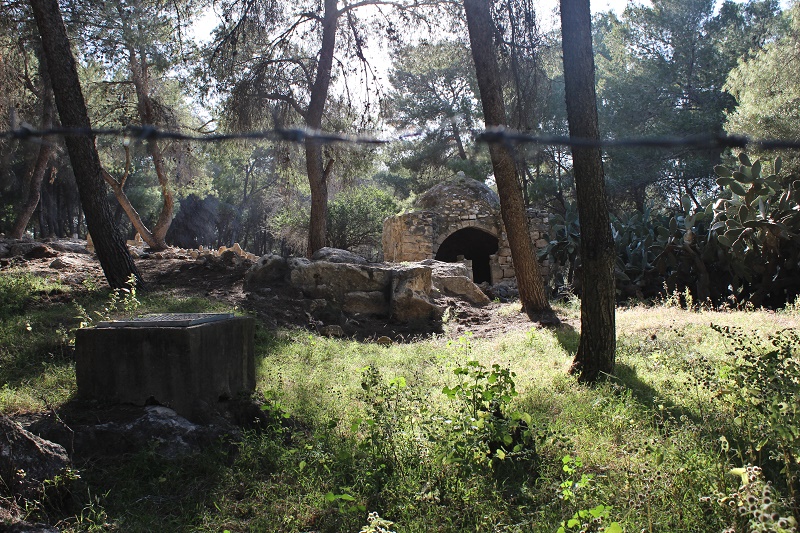 The ruins of the Lubya cemetery. (Photo Credit: Lena Odgaard)

Each May 15th, about five million Palestinian refugees worldwide commemorate the ‘Nakba’ (Arabic for ‘the Catastrophe’) – when nearly half of the Arab population within the borders of what used to be the British Mandate of Palestine was displaced in the war following Israel’s independence. The refugees still demand the right to return but most have nothing to return to as around 400 villages were destroyed. FSRN’s Lena Odgaard joined a small group of Palestinian refugees who were invited back to the ruins of their village, Lubya, in northern Israel where they received an unexpected apology.

“It’s my parents’ village but I feel that it is also my village,” says Mufid Hadrous as he walks through small forest trails and passes piles of rubble that once made up the Palestinian village of Lubya.

Lubya was home to between two and three thousand Palestinians. They were forced to flee by the war that followed the founding of the state of Israel in 1948. In the 1960s, the houses were demolished leaving only stone remnants suggesting the structural outlines of some 600 buildings. Today, the refugees from Lubya are scattered: some went to Syria, others to Lebanon and then Northern Europe, while a few took refuge in nearby Palestinian villages in what is now Israel.

“I recognize the streets because when we lived in a refugee camp in Lebanon and didn’t have TV my mother would tell us about Lubya,” says Hadrous, who traveled here from Denmark where he has lived since the 1980s. He was born and raised in a refugee camp. “I’m 57-years-old, but I never felt that I had a house or a place to live. We are fine in Denmark, but I can never afford to build my own house. This is the first time I can hold the soil of my land.”

Where Lubya once stood is today a park with large pine trees, bushes and cactus plants.

“This sign says that ‘this recreational area was established to enable handicapped access so all may enjoy the forest by friends of the Jewish National Fund and the Women Zionist Organizations of South Africa 1996,'” Shereen Usdin says, reading out loud the writing on a sign erected in the public park dubbed South Africa Forest. It’s the reason why she and another 12 South African Jews are here. They have come to apologize.

“We are here as a group of South African Jews who have all at some state donated money to the JNF,” she says, explaining their mission. “And we are coming here to say that we are sorry that our money was being used in this way. We did not realize that when we were donating money into the little blue box that our money was going to cover the remains of Lubya.”

The members of the South African delegation had never heard of Lubya when they donated money to the Jewish National Fund – or the JNF – an international organization that for more than 100 years has worked to “cultivate a Jewish homeland” by collecting money for tree planting from diaspora Jews. Today it brands itself as an environmental leader boasting of planting over 250 million trees and creating over 2,000 parks in Israel. But critics argue the organization greenwashes the forced displacement of Palestinians by planting trees atop the ruins of 89 Palestinian villages.

Members of the group from South Africa say that was not their intent when making donations. The delegation collected over 200 signatures from fellow South African Jews who gave money to the JNF. Shereen Usdin explains they brought them to Israel with a formal apology to the people of Lubya.

“Our hope is that we can show that we take responsibility for what we did by contributing this money and feel it is important to acknowledge that a huge injustice has been done here and in some ways Jews outside of Israel who are donating money to Israel to build the state of Israel are complicit,” she says.

In partnership with the Israeli organization Zochrot – Hebrew for ‘Remembering’ – they invited descendants of Lubya’s former residents to remember its existence.

Walking together through the ruins of the village, they stop to install new signs, these identifying where Lubya’s school, mosque and cemetery used to stand.

“I heard people from South Africa were coming to say sorry,” Hadrous says. “So I came to say that I forgive them.”

Though recognizing the apology is symbolic, to the Palestinian man it reflects that the conflict is international and that it will take global efforts to correct the injustice. He brought his 10-year-old granddaughter along and hopes that she will carry on the dream of one day returning here to live.

Niva Grunzwieg is with Zochrot. The organization works to inform Jews in Israel about what happened to the Palestinians in 1948. According to Grunzwieg, it’s the first time any group of Jews has apologized to any Palestinians about the ‘Nakba.’

“Most of the time when you try to tell Jews in Israel there was a Nakba and now you sit where someone else used to have a house and he is in a refugee camp they tell you, ‘he lost the war, leave me alone.’ Or other times, ‘that is sad, I’m sorry.’ But to take responsibility means something much more and more on the way to reconciliation.”

Grunswieg, who is herself Jewish Israeli, believes that allowing Palestinian refugees to return is an important step towards reconciliation.

“Even if it doesn’t look like it, I believe it can happen,” she says. “The return of the refugees and the making of a democratic regime, of two people without separation, without racism and violence is a possible thing.”