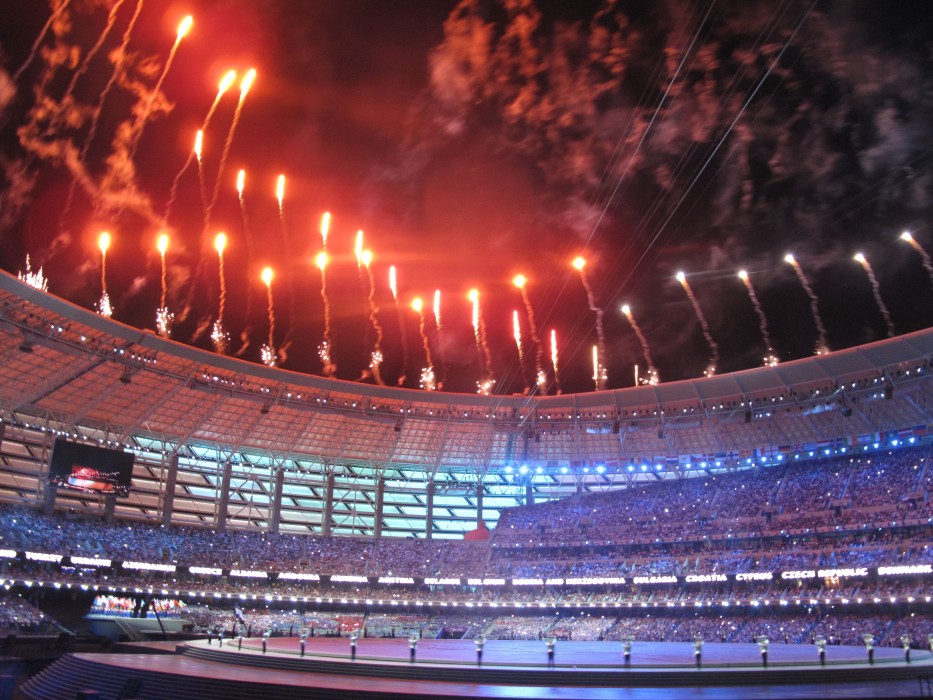 Fireworks at the opening ceremony of the European Games in Baku. (Photo credit: Jacob Resneck)

The first-ever European Games kicked off this month at a $95 million opening ceremony paid for by its host, energy-rich Azerbaijan. The former Soviet republic won the right to host the international event following closed-door balloting by European Olympic Committees.

Azerbaijan is getting a lot of publicity for the billions spent, but not just for its extravagant Olympic party: the games shine a light on the country’s appalling human rights record and efforts to silence dissent and lock up political opponents.

The opening ceremony at the country’s newly-built Olympic stadium spared no expense with 2,000 volunteers and a tight display of choreography and fireworks. The $95 million show featured an appearance by Lady Gaga who sang John Lennon’s Imagine at a grand piano.

Left out of Lady Gaga’s cover were the lyrics, “No need for greed or hunger.”

It was a fitting omission. Azerbaijan has been ruled by the Aliyev dynasty since 1993.  The family legacy has been to use the country’s vast oil and gas wealth to build extravagant buildings and monuments while average salaries remain around $430 a month.

In this event alone, the country spent billions of dollars on public projects realized by private firms controlled by the ruling family.

Many young people seem excited about the sudden influx of visiting foreigners.  At a central park where friends sing and strum guitars, Iqbal, a 21-year-old university student, has stopped to listen. He says he hopes events like the European Games will help Azerbaijan develop more than just its petroleum-based economy.

“We know we are famous (for) our oil,” Iqbal tells FSRN.  “And we want to change this for another side. And maybe, I don’t know exactly, maybe tourism or maybe something like this.”

But not everyone was invited to the party. Human rights campaigners from Amnesty International and foreign journalists working for the The Guardian newspaper were among those barred from entering the country.

Amnesty had planned to deliver a report on the scores of political prisoners and exiled government critics that have increased in the past three years as Azerbaijan’s President Ilham Aliyev systematically clamps down on dissidents, especially those that investigate corruption allegations.

Azerbaijani authorities jailed the leader of a grassroots campaign called Sport for Rights for 6 1/2 years on embezzlement charges, which the group claims are politically motivated. The human rights lawyer is one of about 80 political prisoners now languishing in pre-trial detention, says Rebecca Vincent, the group’s UK-based coordinator.

“We’re trying to put a stop to this human rights crackdown and get freedom for the jailed human rights defenders, the jailed journalists and the other political prisoners,” Vincent explains.

The government denies jailing anyone for their political activity. And government-friendly journalists in Azerbaijan say they have little sympathy for foreign journalists who write exclusively negative things about their country.

“Every country has bad and good things,” says Najaf Hasanov, coordinator of political programs for Hazar Television in Baku. “If you come every time here and if you write every every time that Azerbaijan doesn’t have any democracy and doesn’t have any normal life, I think any country wouldn’t accept that.”

Of course Azerbaijan didn’t just wake up one morning and decide to create its own Olympics. None of this would be possible without the say-so from the European Olympic Committees. EOC chief Patrick Hickey is in many ways the brainchild behind this European Games, a sort of answer to the Pan-America Games or Asian Games.

In 2012 it seems Hickey and Azerbaijan’s President Aliyev found each other. The EOC wanted a country to foot the bill and Aliyev wanted a chance to engage in a building spree as well as boost his country’s international image.

“We cannot dictate to a sovereign state as to how they run their affairs,” said EOC chief Hickey, insisting that the sports world remains divorced from politics. “It doesn’t matter where this event takes place, we are not a political organization, we are a sports organization and we don’t have any mandate to tell a sovereign state what to do.”

That doesn’t hold water with Arzu Geybulla, an Azerbaijani journalist living in exile. She says European countries are doing her people a poor service by allowing themselves to be seduced by energy wealth.

But whether the European Games will be a one-off or the beginning of something big is an open question. The Netherlands, which had agreed to host the 2nd games in 2019, pulled the plug last week after the government said the expenditure would be irresponsible.

In the meantime, critics say Europe’s Olympic committees have put expediency over human rights to hold its own Olympics. But the games are shining a light on Azerbaijan’s leadership which is learning it can’t throw a global party and escape scrutiny, no matter who it locks up or exiles.