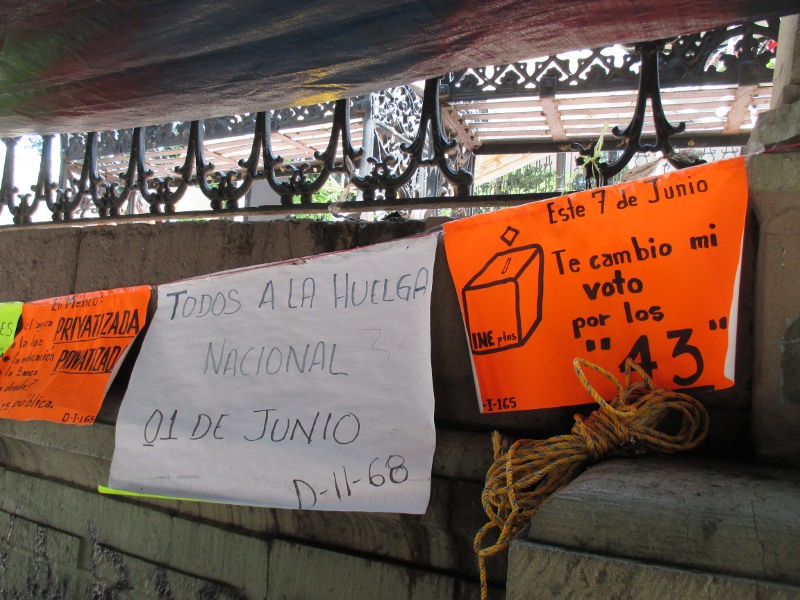 "This June 7, I'll trade you my vote for the 43 [Ayotzinapa students]" reads a sign in the teachers' encampment in Oaxaca City. (Photo credit: Shannon Young)

Mexico held mid-term elections on Sunday. Voting was uneventful in most parts of the country, with notable exceptions in the southern states of Guerrero, Oaxaca and Chiapas. Shannon Young reports form Oaxaca City.

The sounds of military helicopters and protester bottle rockets filled the air in Oaxaca City Sunday as dissident teachers called for a boycott of the elections.

Boycott supporters raided dozens of polling stations across Oaxaca, burning ballot boxes and challenging the narrative that a functional democracy can exist in a country plagued by enforced disappearances, massacres and political assassinations.

The Organization of American States called off its election observation mission to Oaxaca, citing security concerns. Just ahead of the election, the federal government deployed thousands of soldiers and federal police to the southern Mexican state to “safeguard” the elections. Troops patrolled on land and in the air on election day but did not intervene to prevent any of the raids on polling stations.

The most intense protests occurred in the state of Guerrero. According to the Tlachinollan human rights organization, federal police killed a student in the town of Tlapa while cracking down on groups allied with the electoral boycott movement. In the municipality of Tixtla, home to the Ayotzinapa teachers’ college, demonstrators were apparently successful in preventing election officials from installing  enough polling stations to make the election valid.

Days ahead of the election, Ayotzinapa students, parents of the missing students and community police announced they would take action to block the poll.

“We’re not going to allow polling stations to be set up in Tixtla because we no longer believe in politicians, because we don’t want any more organized crime and we know well that politicians work closely with them,” said Kevin Lemus Zamudio, member of a group in Tixtla promoting town councils as an alternative to conventional elections.

Town councils are already the preferred form of government in some indigenous Purepecha areas of Michoacan, where locals also prevented electoral authorities from installing polling stations.

In other parts of Mexico, independent candidates made a strong showing. The northern state of Nuevo Leon elected Mexico’s first ever independent candidate as governor. Voters in Guadalajara, the country’s second-largest city, elected its first mayor unaffiliated with a large party.  A 25-year-old candidate on the same ticket won a seat in Jalisco’s state congress, despite spending only a tiny fraction of what his opponents spent on their campaigns.

Another big winner this election was the “voto nulo” a protest vote that involves casting a purposely spoiled ballot. In some parts of the country, spoiled ballots accounted for around seven percent of all votes cast, performing better than the smaller parties.