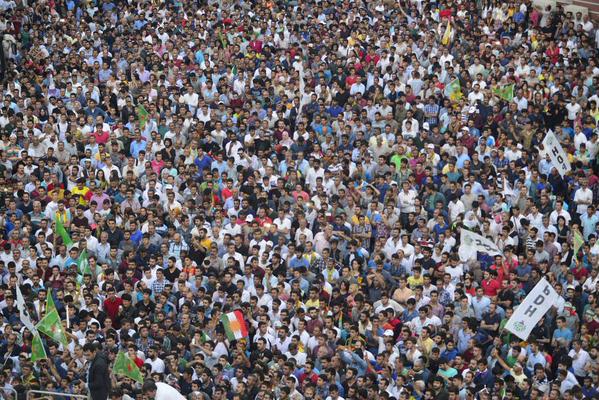 In Turkey, the historic victory of a pro-Kurdish party redrew the political landscape in the country. Sunday’s election results end 13 years of domination by the religiously conservative AK Party and will be a major hurdle for President Recep Tayyip Erdogan who had hoped to consolidate his power to rule the country. FSRN’s Jacob Resneck reports.

The streets of the mostly Kurdish city of Diyarbakir were electric Sunday night and into Monday morning as thousands turned out to dance, sing and celebrate the victory of the People’s Democratic Party (HDP) that took more than 12 percent of the vote nationwide.

The party has already ruled any coalition deal with the AK Party and said it was committed to end the rise of authoritarianism in Turkey.

“With this election, the discussion of an executive presidency and a dictatorship has come to an end in Turkey,” the HDP’s co-chairman Selahattin Demirtas told reporters in Istanbul.

President Erdogan – Turkey’s popular but divisive leader – campaigned hard for AK Party which he founded, hoping a strong victory would allow his party to change the constitution and give him broad executive powers.

Despite garnering 41 percent of the vote, Sunday’s results leave the AK Party badly weakened and needing a coalition partner to avoid another round of elections. This reality effectively spells an end to its single-party domination of Turkey that’s lasted more than a decade.

The HDP – which campaigned on a liberal platform of social justice for women, LGBT and ethnic and religious minorities – will now play a significant role in Turkey’s politics.

The HDP came under sustained violent opposition during the campaign with more than 100 attacks against its staff and volunteers and a twin bombing at a campaign rally last Friday that killed two people and wounded hundreds in the city of Diyarbakir.

The party also campaigned for a continuation of the peace process between Turkey and Kurdish guerrillas. The HDP has organic links with the outlawed PKK which has long fought a bloody war for autonomy and cultural rights for Turkey’ Kurds.

A ceasefire remains in effect in the conflict that’s left more than 40,000 dead since the 1980s and there’s now broad optimism that a political solution to the conflict is closer than ever before.