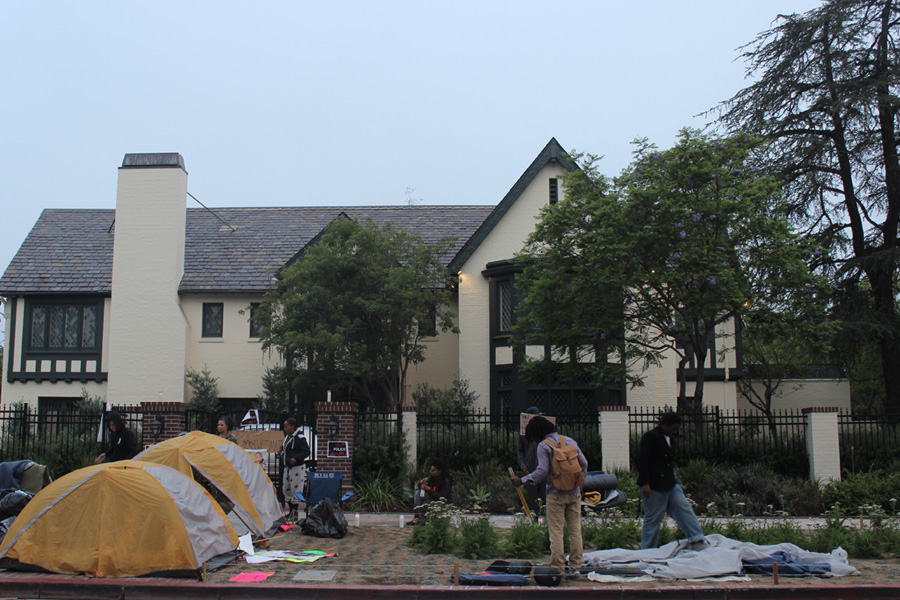 A South Carolina public prosecutor announced today a grand jury has decided to indict the North Charleston police officer responsible for the death of Walter Scott. The case grabbed national attention two months ago after the New York Times published an eyewitness video of Officer Michael Slager firing eight shots at Scott as he fled on foot.

Meanwhile in Los Angeles, the family of Ezell Ford is waiting to hear from the police commission decision about the case involving the fatal shooting of the 25-year-old by Los Angeles police last summer.

Ford’s death sparked a number of protests throughout Los Angeles, and as Lena Nozizwe reports, one group is camping in front of Mayor Garcetti’s official residence ahead of a key decision on the case.

Police say that Ford tried to reach for an officer’s gun. The Los Angeles Times reports that Ford’s DNA was found on the officers. An autopsy released last December found that Ford was shot three times, including once in the back at close range.

Shammell Bell, a graduate student at UCLA and a Black Lives Matter organizer, is part of a group camped outside of Mayor Eric Garcetti’s home. The group wants the mayor to fire LAPD police chief Charlie Beck and make the police commission meeting open to the public.

“We want him to know we are not going to be going anywhere. We’ve been here since yesterday morning, which is Sunday at 6 am, and we won’t be leaving until Tuesday until the commission meeting,” Bell told FSRN.

Early Monday Mayor Garcetti issued a statement saying that he believes the commissioners will be fair-minded. He also offered public condolences to Ford’s mother who he says he tried calling. Ford’s mother, who visited the protesters in front of the mayor’s house Sunday, says she would like the Justice Department to investigate her son’s case.