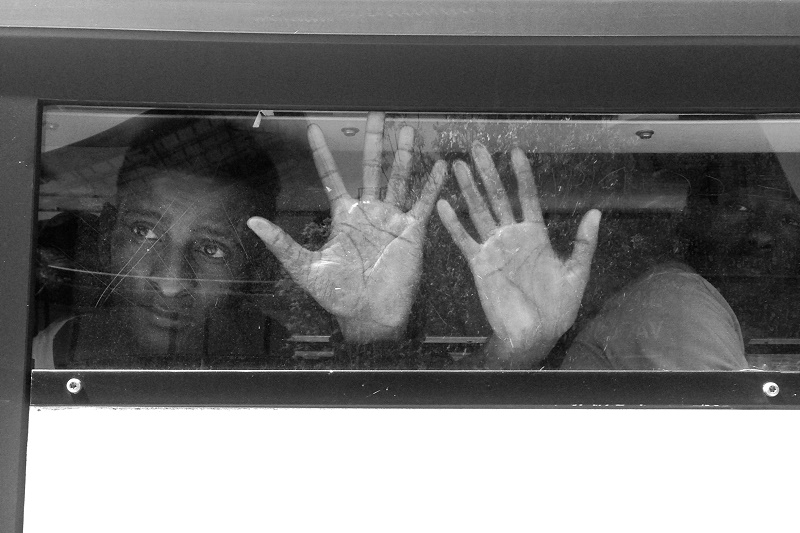 Two Eritrean refugees in a police van peer through the window and watch as officers violently detain their counterparts. (Photo Credit: Raphaël Krafft)

Six days after police dismantled a migrant camp in central Paris with promises of relocation, nearly 200 mostly Eritreans and Sudanese are still homeless and living in the streets. Earlier this week police violently dispersed the group from a public square and detained about 85 people; French human rights officials are investigating. As Raphaël Krafft reports, many migrants are stuck in a cycle detention and release with no where to go.

Chanting “solidarity with refugees,” hundreds of people rallied Tuesday evening in northern Paris in support of mostly Eritrean and Sudanese migrants who were violently detained by anti-riot police Monday afternoon. The approximately 85 refugees were among hundreds evicted from their ad hoc campground beneath an overpass last week.

One local woman, Miss D’Aragon, arrived at the demonstration with a rolling bag filled with almost 45 pounds of grilled chicken to distribute to the nearly 200 migrants who are still sleeping outside.

“I came here to demonstrate once again, because I am fed up with this crappy government which is only able to expel people.”

D’Aragon had donated tents, sleeping bags and clothes that were all destroyed last week when officials razed the migrant camp.

About 50 of the people detained Monday were identified and release, another 20 were sent to detention centers where they face deportation proceedings.

On Tuesday, Jacques Toubon, the French Defender of Rights — an independent and constitutional institution that defends citizen’s rights — opened an official investigation of police violence against migrants the day before. And while Paris Mayor Anne Hidalgo expressed support for a migrant aid center, she has not yet taken official action to provide shelter or assistance.