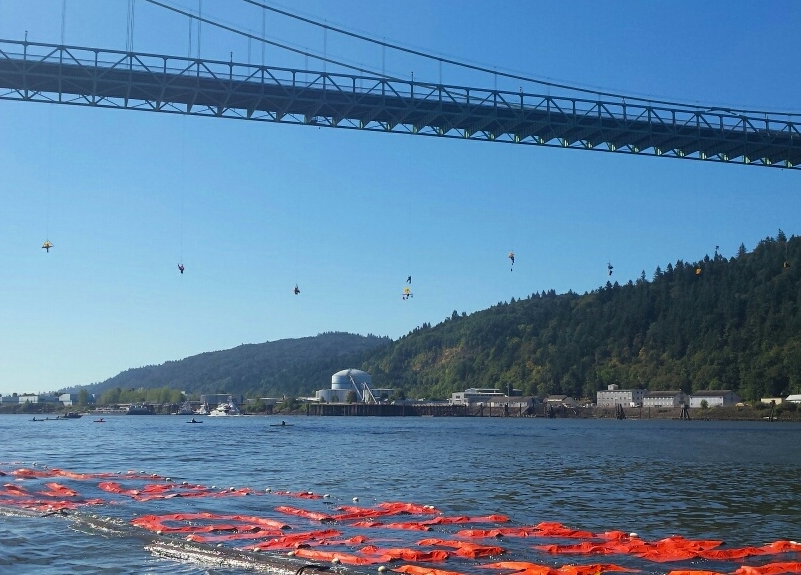 Activists dangle from a Portland bridge to block the path of a Shell-leased icebreaker ship on its way to the Arctic. (Photo credit: Jenka Soderberg)

Around 150 ‘kayaktivists’ gathered Tuesday night in Portland, Oregon to try to block a ship leased by the Shell Oil company from exiting the harbor. The ship, the MSV Fennica, was in Portland for repairs to a gash in its hull discovered while en route to Arctic waters. Jenka Soderberg has more from Portland.

The repair of the icebreaker ship currently in Portland is one of the last steps taken by Shell ahead of exploratory drilling in the Chukchi Sea. Just last week, the Obama administration issued the final permit Shell needed to commence drilling off the coast of Alaska.

As the sun set on the Willamette River in Portland Tuesday night, activists opposed to Arctic drilling took to the water in kayaks, canoes and motorboats. They unfurled a massive floating banner reading ‘Defend the Arctic. Climate justice now.’

“If we don’t come out and at least do an action, then the powers-that-be will assume we don’t care,” said Betty McCartle, who was among those joining the blockade of Shell’s icebreaker ship. “By coming out and having a good time actually on our kayaks, and holding our signs – at least we’re letting some people know that we do care.”

The activists stayed on the water in shifts throughout the night, as they awaited word on when the icebreaker ship was spotted leaving the dry dock. At 3 in the morning, Greenpeace activists rappelled down from a bridge across the river to try to block the ship that way.

Daphne Wysham is with the Climate Action Coalition of Portland: “We were surprised – pleasantly surprised at 3 am when Greenpeace suspended 13 activists from the St. John’s bridge, joining our protest and allowing our kayakers to get a little bit of rest, and now kayakers are joining in waves.”

Shell’s previous attempt to drill in Arctic water, in 2012, failed when the company’s drill rig ran aground and its crew had to be rescued.

Shell’s new push to return to the Arctic is facing resistance in multiple locations. From lawsuits filed by the indigenous Inupiat community of the Arctic slope to the kayaktivists that have tried to block the transfer of its equipment in Seattle and now in Portland, opponents have vowed to continue to fight Shell’s arctic drilling operation every step of the way.