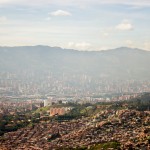 On October 16, 2002, the Colombian government militarized the Comuna 13 district of Medellín with tanks, helicopters and soldiers as part of “Operation Orion.” The stated reason was to “take back” the area from armed groups, including urban militias of the FARC and ELN guerrillas. 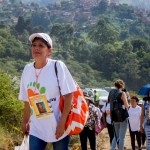 The operation resulted in the enforced disappearances of dozens of innocent people, leaving an open wound of Colombia’s armed conflict in the victims’ families. 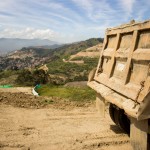 La Escombrera, a rubble dump in the Comuna 13, is somewhat of a landmark on a hillside of Medellín. An unknown number of victims of enforced disappearance from Operation Orion are believed to be hidden here. 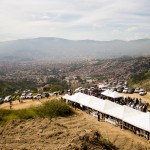 On July 27, 2015 – nearly 13 years after Operation Orion, Colombian investigators began exhuming what they consider to be the world’s largest urban mass grave. 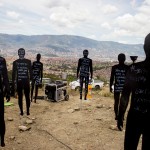 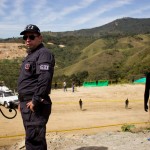 However, Colombian authorities estimate the number of murder victims in the mass grave at around 50. 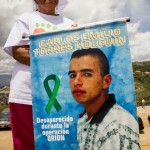 Gloria Holguín’s son was disappeared by men in plainclothes who came for him when he went to his girlfriend’s house in the Comuna 13 in November of 2002. 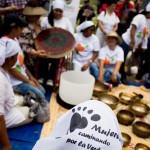 Gloria Holguín’s story is one of many among a group of mothers who lost children in the conflict and formed human rights organizations to demand justice. 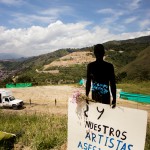 “And our murdered artists?” asks a cardboard cut-out figure. Medellín’s Comuna 13 district has a long history as a cultural and artistic hotbed. The targeting of the area and the loss of its inhabitants remains present in its collective memory. 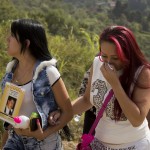 The government has resisted exhuming the rubble dump for years, saying that the economic costs of doing so are too high. However, the victims’ families have tenaciously kept up their fight, demanding the right to know what happened to their loved ones. 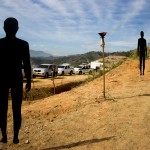 The military commander in charge of Operation Orion is now implicated in what is known as the “false positives” scandal, in which members of the military murdered civilians and dressed them up posthumously as guerrilla fighters in order to collect bounties offered by the government of then-President Álvaro Uribe.

The exhumation is expected to last five months and many residents of the Comuna 13 hope it will bring closure to families that have been searching desperately for answers for 13 years.