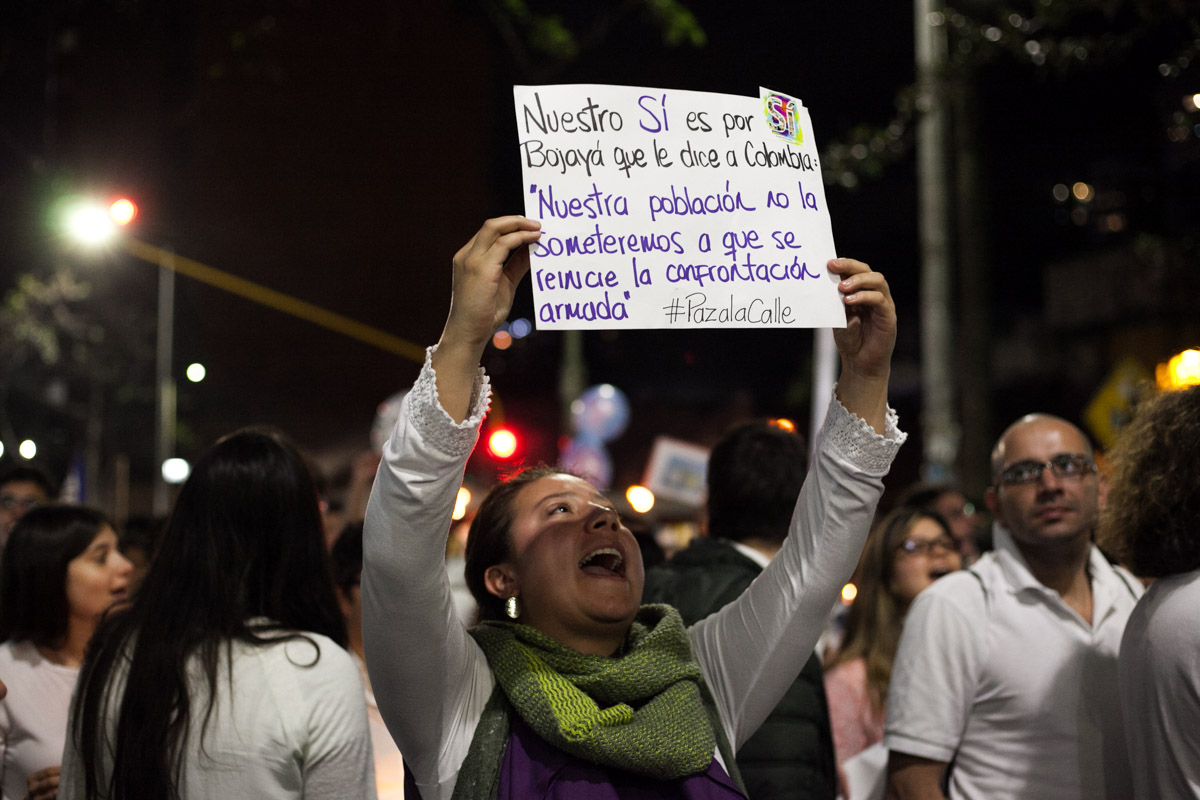 Sign at a peace rally in Colombia reads "Our Yes is for Bojayá which says to Colombia 'Our population will no submit to the resumption of armed confrontation.'" (Photo credit: Andalusia Knoll)

Colombian President Juan Manuel Santos was awarded the Nobel Peace Prize Friday for his efforts to end the country’s 52-year-old armed conflict. The announcement comes just days after Colombian voters narrowly rejected the peace deal between the government and the FARC rebels. In the referendum, a majority of eligible voters abstained from casting a ballot on the peace accord that took four years of negotiations to reach. What comes next is anyone’s guess, as even the two long-warring parties say neither had a Plan B for what all polls predicted would be certain victory in favor of the peace deal. FSRN’s Andalusia Knoll has more from Bogota, Colombia.

The announcement that Colombian voters had rejected the peace accords by a fraction of a percent brought both opponents and supporters to the streets; some in celebration and some in mourning. In Bogota’s main square, Plaza Bolivar, people could be seen arguing publicly about the road forward.

With tears welling in his eyes, Elias Jeerurewa, an indigenous Makuna man who voted Yes, recalled the violence his community has suffered during the Western Hemisphere’s longest running conflict: “They killed my family, my older brother and younger brother. The guerillas killed 37 more people, right in front of my eyes, right in front of my family. Voting for a president who was going to support the violence, we didn’t vote twice for Mr. Uribe so that through violence he would solve our problems. He went towards the rural areas and destroyed our communities, our reserves, our riches, and they killed our people and then became owners of our land. We have to get past this way of thinking. No more war, the war just brings death, desolation, hunger. We deserve something better, new experiences, new lives.”

A geographic analysis of the plebiscite results shows that voters from violence-ravaged communities overwhelming backed the accords. But Gilberto Villaseñor of the human rights organization Witness for Peace says this defeat at the polls cannot detain the peace process.

“This plebiscite very narrowly lost and the people who have been most impacted by this conflict voted very strongly in favor of the accords,” Villaseñor explains. “And many folks in social movements and folks in human rights organizations campaigned for this plebiscite. I have a lot of faith that despite this fact, the arc of history bends towards justice.”

The night after the referendum, a few hundred university students and ordinary citizens gathered to hold a popular assembly in favor of peace in a park in Bogotá.

José Antequera’s father was a leading member of the Union Patriotica, a leftist political party that emerged in the 1980’s following a peace process similar to the one recently negotiated between the government and the FARC. Hundreds of this party’s members – Antequera’s father among them – were assassinated in a politically-motivated extermination campaign. Many more fled into exile.

As a young human rights lawyer, José Antequera has become a leading advocate for the rights of victims of the civil war. He notes that the largely Afro-Colombian community of Bojayá – site of an infamous massacre – voted 96 percent in favor of the peace accord.

“I wasn’t surprised at all that the majority there voted ‘yes.’ I know people in Bojayá and know that more than just a population, there’s a social movement for peace absolutely aware of what happened to them, that their tragedy is a product of a conflict and its disintegration,” explains Antequera. “In this sense, they’re a people completely dedicated to peace, to the point that they’ve carried out acts of conciliation and public pardons with the FARC in their territory.”

Antequera says it’s essential that people in the urban areas less affected by the war try to understand the situation of rural Colombians.

“There’s a huge disconnect in our country,” Antequera says. “The peace process is an opportunity to break this disconnect and we continue to walk this path so that people in the cities can be aware of the fact that the war affects populations and territories that – perhaps far flung – are part of our country and that we’re all Colombians.”

In a way, the referendum results are an illustration of the entrenched polarization that has fueled the armed conflict and associated violence. But many here are not ready to surrender their hopes for peace to a referendum whose margin of victory was a fraction of a percentage point.

On Wednesday, tens of thousands of young people marched in Bogota to demand continuity of the peace process. Among them was Jennifer Maria Cortero, whose uncle was one of the 25,000 people disappeared during the armed conflict.

“I’d like to tell everyone who doesn’t have faith [in this process] that there’s always a first step and this time victims were taken into consideration in the crafting of these accords. For the first time, victims of forced disappearances were taken into account with the demand to create a special investigation unit to search for our loved ones,” Cortero says. “Because if we find them, we’ll know the truth and there will be justice. But if none of this happens, there will never be neither truth nor justice and our families will remain always invisible to politicians and parties and groups on the fringes of the law.”

In Havana, the chief negotiators for both sides will continue to meet and see if they can hammer out modifications to the accord that a broader majority can agree on.

Correction:  Gilberto Villaseñor is with Witness for Peace. The original version of this story misstated his first name.