Medicare and Medicaid turn 50; advocates rally for single-payer for all 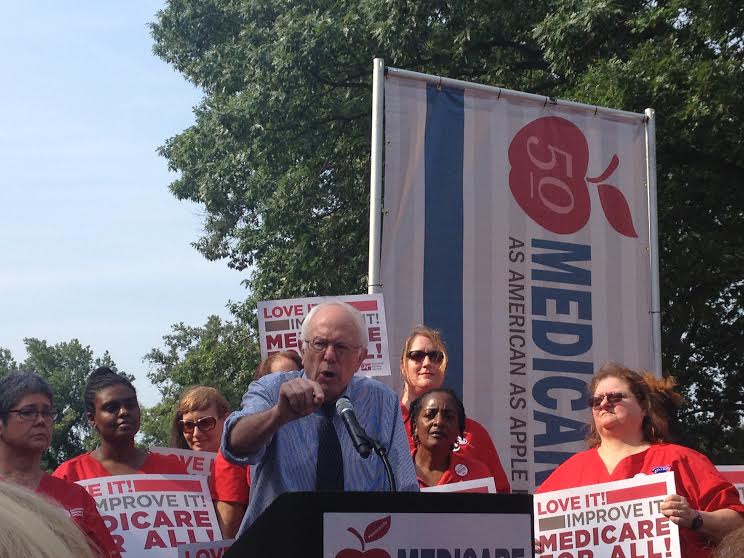 Medicare and Medicaid turned 50 on Thursday, and some advocates marked the anniversary by calling for expanding the publicly-funded federal health care program nationwide. Under the Affordable Care Act, 31 states plus the District of Columbia have expanded Medicaid coverage, but 19 states have refused to do so and Utah still hasn’t decided. Jani Actman reports from Washington, D.C.

Download Audio
On the day of 50th anniversary of Medicare and Medicaid, supporters of extending health care coverage to all rallied across the country to spread their message.

These advocates want the United States to switch from its framework of private health insurers to a single-payer health care system, meaning that a single public agency would finance health care coverage for all legal residents.

At the rally in Washington D.C. on Thursday, Democratic presidential hopeful and Independent Vermont Senator Bernie Sanders was the keynote speaker.

“There is no human right that I know,” Senator Sanders said, “that is more important than to say loudly and clearly health care is a right of all people, not a privilege.”

Currently, Medicare is only available to most people older than 65, certain younger people with disabilities, and those with end-stage renal disease. And while Medicaid is available for those at the very lowest income brackets, Sanders says that people without health coverage die too often because they can’t afford medical care.

“That shouldn’t be the case in America,” he told the crowd. “When you’re sick, you see a doctor.”

The United States is the only developed country in the world without a universal health care system. Advocates argue that expanding the federal healthcare system to all residents would improve nationwide health coverage and lower administrative costs.

“The reason it’s most efficient,” explains Dr. Steffie Woolhandler, a professor at the CUNY School of Public Health and co-founder of Physicians for a National Health Program, “is because you are able to save hundreds of billions of dollars annually by eliminating the bureaucracy and administrative costs associated with private health insurance.

Woolhandler co-authored a study published in The New England Journal of Medicine that showed 31 percent of healthcare spending in the U.S. goes toward administrative costs. That compares to 16 percent in Canada, a country with a single-payer system.

While some proponents of the expansion of a federal health care program say Obamacare is a step in helping to insure more Americans, advocates like Woolhandler say the state-based health insurance exchanges are no substitute for the single-payer system.

“By building on private insurance rather than going for expanding Medicaid for all,” says Woodlander, “they added additional dollars to those administrative costs.”

Opponents of single-payer health care, meanwhile, say that a government-controlled program would lead to lower pay for medical professionals and stifle medical innovation. And some critics argue it won’t lead to cost savings but will mean higher taxes.

Such arguments likely won’t deter Thursday’s advocates, who voiced support for the Expanded and Improved Medicare for All Act. Introduced in the U.S. House of Representatives in 2013, the legislation would establish a single-payer health insurance system.

Jim Baldridge, a former stationary engineer at Johns Hopkins Medical Center and president of the Maryland/DC Alliance for Retired Americans, supports that model. Baldridge says both he and his wife know the first-hand benefits of Medicare because they are both enrolled in the program.

“But our grandparents were not,” he says. “And I remember clearly how difficult it was to take care of them and their health care needs before they died.”

He says as the inheritors of Medicare, it’s up to his generation to preserve it.

A recent poll by the Kaiser Family Foundation found more than three-quarters of Americans think Medicare is a very important program, ranking second only to Social Security. But if the fight over the Affordable Care Act is any indication, expanding publicly-funded healthcare to more Americans will be no easy task.