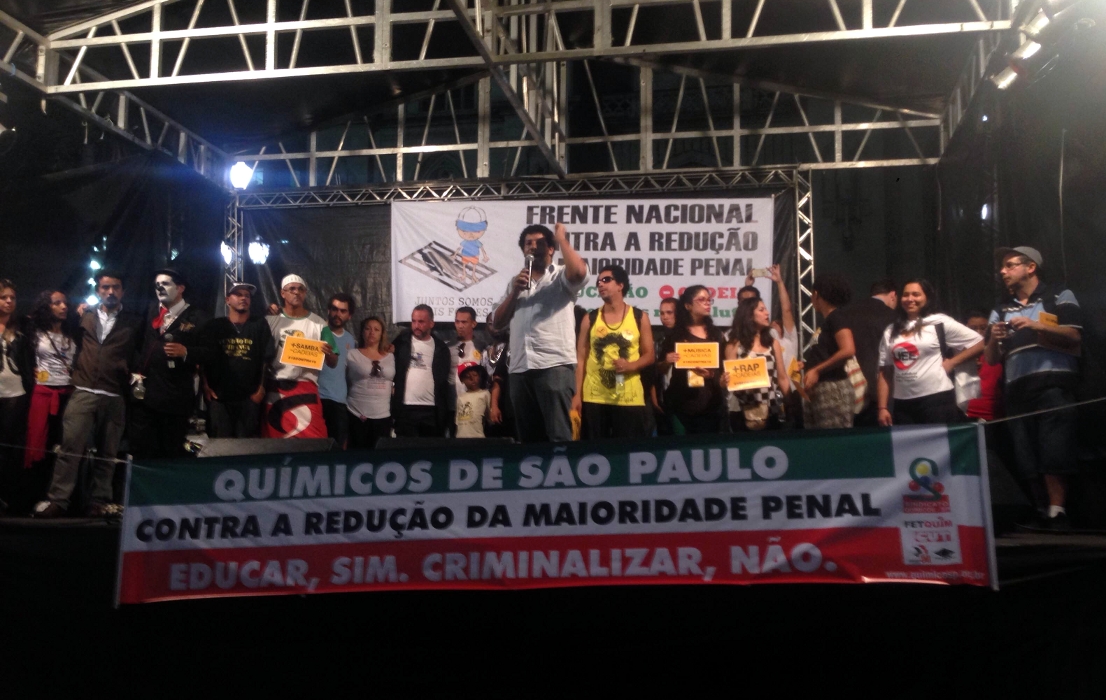 Speakers at a Sao Paulo rally against a proposal to lower the age of criminal liability. (Photo credit: Sam Cowie)

Legislation before Brazil’s Congress could amend the country’s constitution to lower the age of criminal liability for violent crimes from 18 to 16. The controversial bill – passed last month by the lower house of Congress – now goes to the Senate. The proposal has met strong resistance from activists and human rights advocates. From Sao Paulo, Sam Cowie reports.

Opponents of legislation to lower the age of criminal responsibility marched in protest through central Sao Paulo on Monday. The march convened outside of the Praca do Se cathedral where members of human rights groups and leaders of various social movements gave speeches from a pre-mounted stage. Organizers say that attendance peaked at around 4000 people who held banners and placards reading “reduction is not the solution” and “less prisons, more schools.”

Nineteen-year-old, Andressa Mendes, a member UJS, a left wing student organization, was there with a group of her friends. She says that lower the age of criminal responsibility will not help to reduce crime.

Mendes says young people are more likely to be victims of violent crime than perpetrators.

A report released this week by the UNICEF found that Brazil has a staggering murder rate for minors; an average of 28 per day. The report also found that Black children make up a disproportionate number of murder victims under the age of 18.

The controversial measure to amend the constitution to lower the age of criminal responsibility to 16 has been on the agenda since 2014’s election.

The first version of the bill was voted down, but the day after the initial vote, speaker of the house and bill sponsor Eduardo Cunha of the PMDB party pushed through an amended version which passed the lower house of Congress.

Legal experts including the ex-head of the Supreme Court Joaquim Barbosa, who enjoys near celebrity status in Brazil for his part in the Mensalao corruption trial, blasted the second vote as unconstitutional.

But the bill is lauded by conservative lawmakers who make up a large portion of Brazil’s current congress, while recent public opinion polls suggest 87 percent of Brazilians are in favor.

Pedro Abramovay, a former national justice secretary who has worked extensively with prison reform says that the move will exacerbate already terrible conditions inside Brazilian prisons.

According to Abramovay, Brazil’s prison population has quadrupled since 1998. Today the country has the world’s fourth largest incarcerated population behind the US, China and Russia and in recent years has seen a proliferation of private prisons.

International human rights groups such as Amnesty International, Human Rights Watch and UNICEF have blasted the proposed amendment to lower the age of criminal responsibility.

Brazil’s Senate is due to vote on the measure at the end of the month.