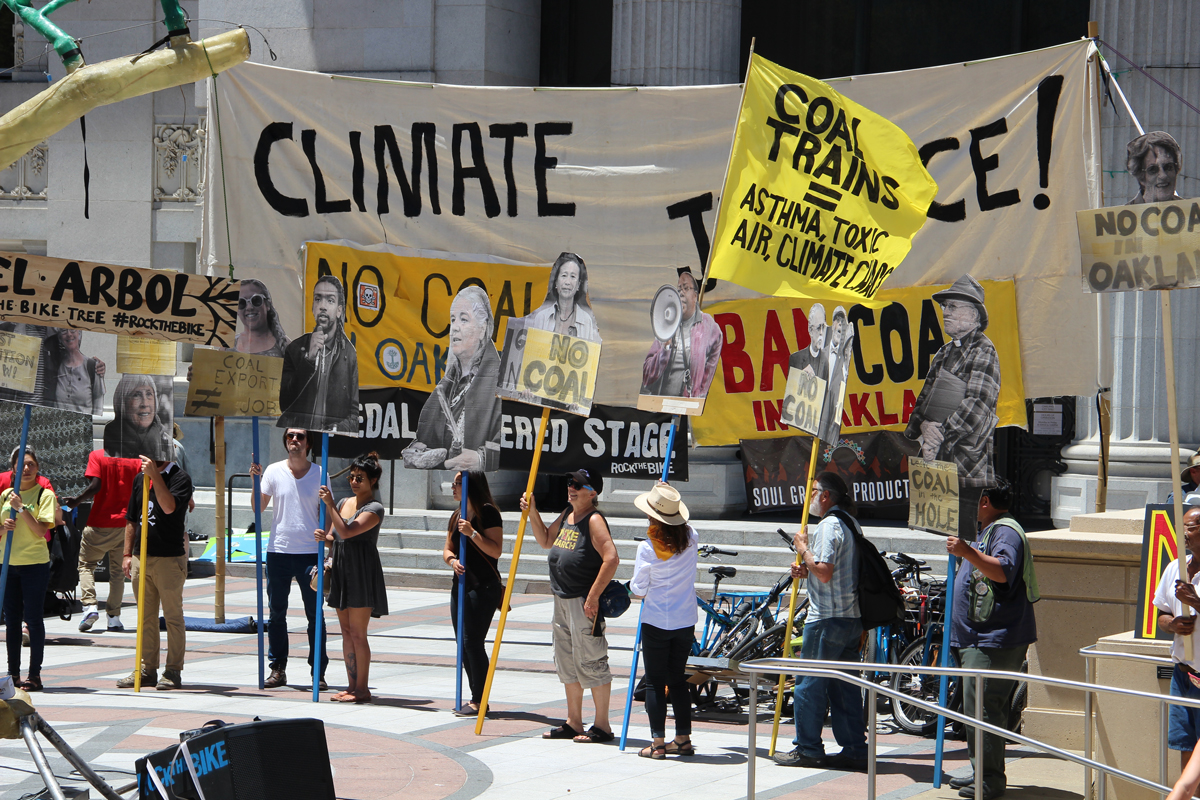 A "No Coal in Oakland" rally before the city council meeting on Monday, June 27, 2016. (Photo credit: Peg Hunter via Flickr / Creative Commons)

The Oakland City Council voted unanimously on Monday to ban the transport and storage of coal shipments. Phil Tagami, developer of the old Oakland Army base, had proposed what would have been the largest coal export terminal on the West Coast. Carla West reports from Oakland.

The debate over the proposed coal export terminal in Oakland has been raging for two years. The plan calls for shipping coal on rail cars from Utah to a port in West Oakland for export to Asian markets.

The arguments for and against are familiar: employment versus the environment. Supporters of the terminal say it will bring jobs to the area while opponents argue the coal dust pollution will harm human health.

It all came to a climax Monday night, when the Oakland City Council held a special hearing on the health and safety impacts of such a terminal. The council had signed a lease with real estate investor Phil Tagami to allow him to develop land on the San Francisco Bay once used as an army base. The lease prevents the council from writing any new ordinances limiting his ability to do so, unless it concerns the health and safety of area residents.

Council chambers were packed with three overflow rooms. The majority of those in attendance opposed the coal terminal, but a very vocal crowd of the plan’s supporters repeatedly heckled speakers from the balcony seating.

The proposed coal terminal is in an area of West Oakland that is majority African-American and has high unemployment rates. But Josie Camacho, Chair of the Alameda County Labor Council, says building jobs on coal exports comes at too high of a cost: “It is insulting to labor that the developer has attempted to use community’s desire for jobs to push through a project that poses grave danger to our health and the environment. We reject the notion that this is a matter of jobs versus community health or jobs versus climate justice. The port development will be profitable and create jobs, regardless of the commodity shipped through it. The Alameda Labor Council calls for nothing short of a total ban. We will not be fooled by mitigation efforts and we will not be threatened by the bogus jobs claim.”

The coal slated for export through the planned terminal would come from mines in Utah destined for Asia. With the domestic demand for coal in decline, producers have increasingly looked to foreign markets to continue to maintain profits.

“TLS will use covered rail cars to deliver all of the commodities through this terminal. These covers have proven to be safe and reliable systems for over 40 years, providing an important link in the movement of bulk material by rail,” Bridges told city council members and the public. “Using covered rail cars in transportation of coal should be celebrated as the environmental improvement that it is rather than a new technology to be feared and vilified. These covers will all but eliminate any fugitive dust from rail cars. TLS will cover the conveyances and the storage systems on the terminal to ensure that we comply with air quality emissions regulations.”

But Assistant City Clerk Claudia Cappio says covering the environment actually increases the health risks for workers at the facility.

“With regard to whether there are technologies available to contain or minimize dust emissions, the ESA report and other evidence finds that no effective means has been demonstrated either by coating or covering rail cars,” Cappio points out. “Staff is determined that the pre-existing local, state and/or federal laws, as well as potential regulation or mitigation are inapplicable or insufficient to protect and promote the health, safety and general welfare of Oakland citizens, residents, workers, employees, and visitors, many of whom already suffer disproportionately from the effects of nearby industrial activity, and who would uniquely and adversely impacted by the handling and storage of coal and coke at the bulk materials facilities or terminals within the city.”

Project investors have lobbied influential local ministers to support the terminal. And while unions often favor projects promising jobs, that’s not the case with the International Longshore and Warehouse Union Local 10.

“My brethren ministers, leading our people into coal is the equivalent of leading us into Jonestown, making us drink Kool-Aid laced with cyanide,” said the local’s Secretary-Treasurer, Derrick Muhammad. “It might sound good, it might look good, but it’s a trick. And the end results are devastating. We encourage you to vote no on coal.”

Monday’s vote against the terminal is not a death blow. The city ordinance will be up for a second reading July 19. And Developer Phil Tagami is reportedly threatening legal action, suggesting the ban on his project violates the leasing agreement’s terms. In the meantime, opponents of the terminal are celebrating their victory, while vowing to keep up the fight.